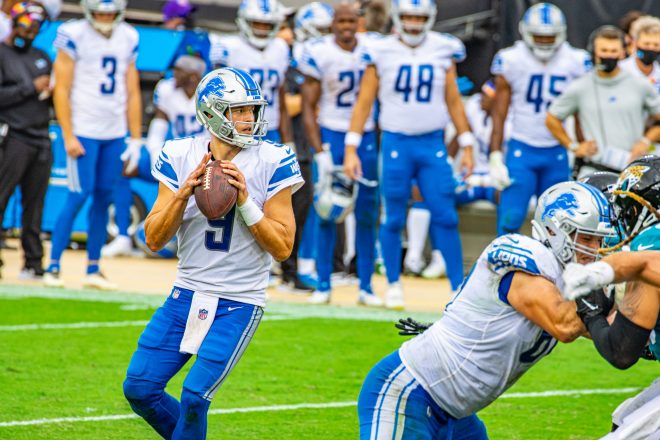 After many fans and media members were outlining potential trade scenarios involving the Lions’ former QB Matthew Stafford, we now find out that the Patriots were never going to be part of the equation.

NBC Sports’ Tom E. Curran broke the story that said Stafford made it clear that the Lions could trade him “anywhere but New England”…ouch.

The Lions didn’t try to camouflage their intentions to trade Stafford, and it was a smart move. Before the feeding frenzy snatching up QBs in the 2021 NFL Draft begins, they made it clear that they were in rebuilding mode. And their soon-to-be 33-year old QB wasn’t part of their plans.

There were rumors that several teams were in on the talented Stafford, who has performed very well for Lions’ teams that have struggled for decades, despite him taking them to a couple of playoff appearances, but no wins.

Curran’s source for this was someone from another team that was also in on the Stafford negotiation and lost out.

The Patriots reportedly were willing to part with a player and a 2nd round draft pick. That offer was literally blown out of the water by the Rams who offered a 3rd round pick this year, a 1st round pick in 2022, and a 1st round pick in 2023. But the kicker was the inclusion of QB Jared Goff and his bloated salary that the Rams wanted to get away from. Goff is scheduled to make $27,825,000 guaranteed in 2021, and $25,000,000 in 2022. Then Detroit can cut the remaining two years of his contract with no salary cap hits with dead money.

Detroit can (and probably will) still draft a QB in this year’s draft and have Goff act as a bridge for at least this upcoming season and possibly for two.

However, back to Stafford, is it any surprise he didn’t want to play in New England? There shouldn’t be. The combined Bill Belichick-Tom Brady dynamic which included a guaranteed deep playoff run every season that attracted free agents to the Patriots is gone. That factor can’t be downplayed. Free agents were willing to take a short-term deal knowing that they would be playing in several high-profile games every year, with the opportunity to parlay a playoff run into big money contracts.

Now, with Tom Brady gone, the Patriots are rebuilding, even while Bill Belichick remains. But looking at things from Stafford’s perspective, he has a house and friends in Orange County. He wanted to play in California, in the warm weather…and the Rams are considered by many to have been just a QB away. Their defense was one of the best and they have plenty of options for the offense.

Will that remain so? Possibly not. The Rams’ salary cap is heavily influenced by several high-priced players and a couple of key members of the defense are free agents. They could be looking at a drop in defensive efficiency in 2021. Just ask the Patriots who lost a slew of defensive players in 2020. Stafford, however, should be a big upgrade over Goff, at running the offense of Sean McVay.

But the Patriots? First off, while Stafford played in Detroit, those games were indoors. The Patriots have had their highlight films of several Super Bowl teams chocked full of bad, (read wintry) weather. And as James Harrison (although he liked it) and other players found out, they practice in the elements to better prepare themselves for the rigors of playing in said conditions. Games against the Jets and Buffalo on the road could also mean in winter conditions, depending on the schedule.

But the elephant in the room is the supporting cast. The Patriots’ wide receiver and tight end positional groups are the worst in the league as currently comprised. Could that change in free agency/draft this spring? Of course, but with the cupboard bare and no established QB on board, are any of these players going to bite on playing in New England? Not without some added zeros on the offer.

The Matt Patricia factor, I give very low factor points. Patricia isn’t the head coach, nor does he have anything to do with the offense or the play calling of Josh McDaniels. But the supporting cast around whoever the QB ends up being eventually does…

And that brings us all back to square one. Deshaun Watson? He isn’t coming here either, regardless of what the Patriots offer, and the fact that Nick Caserio stated that the Texans aren’t trading him.

As we’ve said here before, I believe the Patriots will get one of those mid-tier bridge QBs and try to draft a young gun to come in and try to learn the offense. But that has to be the first domino to fall once free agency does begin. No free agent wide receiver or tight end worth his salt is going to salivate coming to New England to play with Jarrett Stidham (no offense intended) at this point.

So buckle up folks, “it is going to be a bumpy ride”