2 years ago at 5:35 am ET
Follow @SteveB7SFG
Posted Under: Patriots News 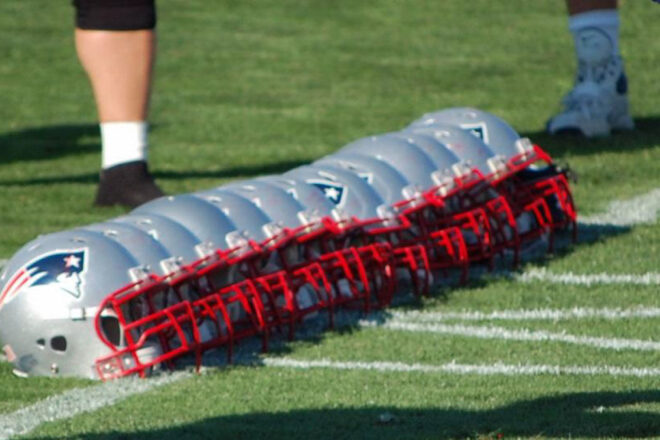 The weekend of no football before the Super Bowl followed by months of no football. I am already feeling that lack of Sunday required watching. While I love and played hockey most of my life, it just isn’t the same as watching the NFL.

Speaking of the Super Bowl, I don’t know how many people are aware of the dark side of hosting a large event in a city, but human traffickers also descend on every host city as it shows the darker side of our people. I wrote a piece about that for another site this week: https://sofrep.com/news/sex-traffickers-descending-on-florida-ahead-of-the-super-bowl/

Be sure to check out draft profiles on players we feel will fit the Patriots’ needs, the first couple are already posted. Nice to see local Grafton player Ifeatu Melifonwu getting some air time in Senior Bowl highlights. “Iffy” as he was known locally, was a tremendous HS player and went on to Syracuse. Having covered him through his local years at the Grafton News, he’s a tremendous athlete and a great young man…We wish him all the best.

Jones met with the Patriots and had this to say about the meeting: “We just had a good conversation,” said Jones. “We talked and they got to know me really well. I really liked their [Patriots] table. It’s kinda fun to see how different tables, they act a little different, but the Patriots were really cool and asked some really good questions.”

The Patriots are in need of a QB and ESPN draft analyst Mel Kiper has them taking (perhaps a bit too early) Jones with the 15th pick in the 1st round.

“Maybe it makes too much sense,” Kiper added. “Things never work that way when you think you got something here from just a looking back here and connecting the dots.”

Nick Caserio – The former Patriots Director of Player Personnel finally got his GM job after an impressive 20-year stint with New England. The Texans have wanted him for a long time, and now…the two have finally linked up. But Caserio has a hornet’s nest around him from Day 1.

The Texans were 4-12 in 2020, and are currently $20 million over the salary cap. And restocking the roster from the draft will be difficult as Houston doesn’t have a 1st or a 2nd round draft pick due to trades that they made with Miami. Some analysts have suggested cutting J.J. Watt which would erase that $20 million deficit. The fan base wouldn’t handle that move well…at all. Watt is entrenched with the community as well as the team and has been a staple of their defense.

Worse still for the Texans and Caserio is that their QB Deshaun Watson is in open revolt and has requested to be traded. We’ll have more of Watson below, but Caserio’s job isn’t just limited to those issues, there remains the big issue of Jack Easterby.

The former Patriots’ staffer has been gradually getting the ear of Houston owner Cal McNair. If half of what the rumors are of Easterby are true, then he is an agent provocateur and has designs on running the show and despite the two being reportedly close, then Caserio’s best move would be to cut ties with Easterby and have him either let go or put in a less influential position. However, the chances of that happening are slim…to none. It is going to be interesting to see how this all plays out.

Mike Pettine, a scapegoat for another GB exit- You knew this was coming …right. Somebody had to take the blame for the Packers falling flat in another conference championship game. And as you all know, it is never, ever Aaron Rodgers’ fault. So Pettine got the blame.

Pettine wasn’t fired, his contract was up, but the Packers said, he won’t be returning in 2021. Yes, the Packers’ defense didn’t play well in the first half of their loss to Tampa Bay. Tom Brady carved them up, but it was still only 14-10 with a few seconds to go before Pettine called a bone-headed defense and Brady launched a deep touchdown pass to make it 21-10 at the half.

Pettine had a Top 10 defense that got better down the stretch. In Green Bay’s six-game winning streak to finish the regular season, Pettine’s unit allowed just 18.5 points per game, sixth-best in the NFL. In the divisional game, the Packers allowed just 148 net yards passing to the Rams and just 244 total yards.

But Rodgers’ decision-making, which can easily be called into question obviously isn’t the problem so Pettine is out.

4th & 2 Podcast – If you haven’t checked out our PatsFans.com podcast, “Patriots 4th & 2” in a bit, please check it out. Russ, Derek, and I recorded a podcast on Friday and talked about the Super Bowl, Senior Bowl, and “the QB Question”.

The Patriots are stuck watching the QB that they jettisoned last spring play in the Super Bowl and throw 40 TDs in the regular season and at least seven more in the playoffs. But they were not just a QB away, as we all know from a deep playoff run in 2020. But it doesn’t sting any less from the standpoint of watching him take a perennial loser to a Super Bowl berth in Year 1.

For some reason, the team tried to power-play Brady into accepting their “take it or leave it” approach with no backup plan in place. They were fortunate to be able to sign Cam Newton at such a discount, especially since they had no more cash to spend.

We all know now that the move to Newton didn’t work out anywhere near the team had hoped. Whether it was the lack of offseason time due to COVID-19, his lack of weapons around him (like Brady suffered through in 2019), or his skills eroding (maybe a combination of all three), it remains to be seen. But it wasn’t pretty.

The Krafts were fortunate in one aspect, the fact that no fans were in attendance was probably a good thing. Because the boos that would have rained down would have been loud and embarrassing. Those would have fueled even more of the hot take talk sports radio than was already happening.

Newton didn’t react well to that in the past and it would have been interesting to see if his outlook on things may have changed.

The Quarterback Question, Don’t Fall For the Big Name Hype…Yet:

For the Patriots, the search for a franchise QB is back to square one. The rumor mill among fans and media has been alive and well with a number of well-known established QBs being tossed about. But as we’ve said on the podcast many times, the Patriots are more than “just a QB away” from being a contender.

Getting one of these established QBs will not only take a big chunk of the Patriots’ salary cap, but it would also necessitate giving up a lot of their draft capital that they need to rebuild. So… we wouldn’t think that they’re going to move on any of these QBs, but “never say never” right? With that caveat in mind, we can take a look at who is out there and discuss what everyone else is doing on social media.

Deshaun Watson – Let’s face facts, there is no way that Watson will approve a trade to New England. Forget all of the made-up rumors of “Houston is contemplating letting him go” BS. Nick Caserio would have to be floored by any offer coming in.

Caserio was quoted by NFL.com’s Ian Rapoport as saying, “I just want to reiterate our commitment to Deshaun Watson. … We have zero interest in trading the player. We have a great plan and vision for him. We look forward to spending more time with him.”

Why would Watson agree to a trade to New England when they have the WRs and TEs that they currently do? And forget a 1st or 2nd round WR coming to NE, as that will be part of the compensation that Houston will insist upon (and get if they indeed decided to trade Watson).

Why that type of haul seems insane given that Stafford will be 33 this year, the Rams were getting rid of a ridiculously overpaid salary in Goff who they foolishly overpaid with a four-year, $134 million extension with $110 million guaranteed after he led the Rams to a Super Bowl LIII appearance, where the Patriots shut the Rams down 13-3. And in essence, he and the offense has never been the same.

The trade for Goff doesn’t mean the Lions will not look for a QB in this year’s draft, they probably will and use Goff as a bridge QB. So, there’s that Patriots fans…

Jimmy Garoppolo – As Derek Havens said on our Friday podcast, “What is the fascination with bringing Jimmy G. back?” Yes, Bill Belichick was enamored with him but has he ever shown that he can stay healthy? The 49ers gave him a huge five-year, $137.5-million contract that will pay him $24 million in 2021. That’s a lot for a guy who may never be a Pro Bowl QB.

Garoppolo will in fact know the system, the terminology, and the play calls, so his acclimating back to New England would be quick. He could be the (expensive) bridge QB if the team decides to draft a young QB, which would be advisable considering his injury history. However, the compensation issue would again be a question of what the 49ers were asking if they decide to move on.

I’d put the chances of any of them landing in New England as remote, Watson the most so, with Garoppolo the most likely, but even that I’d give less than a 50 percent chance of happening. But crazier things have happened. Don’t watch New England, watch Detroit and SF to see if much is happening.

While my head tells me the Tampa Bay defense can’t hold up against Kansas City, I’ve learned what folly it is to bet against Tom Brady. So, I’m going to take Tampa Bay on a last-second field goal that will put Brady at #7, and the usual suspects can point at the score and bemoan that Brady was pulled out by a kicker again.