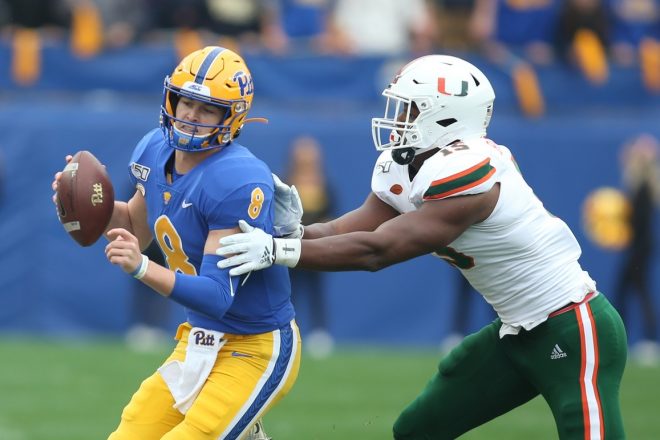 The Patriots need a lot more from their pass rush in 2021, as it was hardly the type to keep offensive coordinators awake at night worrying how to stop them. The team was led by Chase Winovich who made a nice Year 2 leap in his pass-rushing ability. Winovich garnered 5.5 sacks, 18 QB hits, and 33 QB pressures.

But the hole in Winovich’s game remains his inability to set the edge in the running game. And until he can bulk up a bit and get stouter in the running game, he’ll struggle to ever be a true three-down player. The other edge players are all free agents, John Simon, Deatrich Wise Jr., and Shalique Calhoun.

Simon has always been a steady, if unspectacular player, in the mold of a Lawrence Guy. But he uncharacteristically struggled in 2020. Wise had a good season and showed increased ability as a pass rusher. Calhoun was a subpackage player, but it is possible that all three may be playing elsewhere in 2021. The Patriots will be relying on Josh Uche to take up some of the slack from the linebacker position, but they need an influx of athleticism and speed at the position.

Gregory Rousseau from Miami could be that guy if he is still on the board at #15.

Rousseau is a truly unique prospect and a freakish athlete who was dominant in 2019. He opted out of 2020 because of COVID-19. The only drawback to the talented edge rusher was that the 20-year old has essentially only one year of college football experience. In 2018, he broke an ankle after just two games.

Watching Rousseau’s tape of 2019. Miami moved him all around the defensive front, mainly on the edge, but at times standing up. On obvious passing downs, the ‘Canes slid him inside to a 3-technique and even over the center. With his long arms and strength, he can defeat double-teams and doesn’t allow blockers to get into his pads with his long arms.

His frame is such that he can still add some weight that will not unduly influence his athleticism. He sets the edge excellently.

– Outstanding athleticism for someone his size

– Excellent at setting the edge, can convert speed to power

– Despite outstanding traits, is still a raw prospect

– Had only one year of college football

Rousseau would break from the mold of the red-shirt rookie season and compete for significant snaps right off the bat. He’d be an edge-setting, pass rusher who can play in a variety of roles.

Yes, with a little bit of experience, and some coaching at the pro level, Rousseau could blossom into one of the better pass rushers in the league. His ceiling is very high.

He’ll replace Simon, who I believe won’t return this season.

Conclusion:
NFL.com’s Daniel Jeremiah wrote about Rousseau last summer. “We’re all familiar with the phrase “love at first sight.” Well, that’s what happened when I studied my first tape of Gregory Rousseau. He possesses all of the traits and skills I look for in a pass rusher. He jumps off the screen. I’m usually very cautious when I evaluate players over the summer. Not this time. To borrow a line from one of my favorite sports movies, he had me at hello.”

Rousseau is very impressive and has been working out, preparing for his decision to enter the draft. His decision, he said in an interview with Draft Wire, that his decision ultimately was made for his mother, who is a nurse and was working with COVID-19 patients. He is turning pro so that his mother can retire early and get away from the hospital. And that shows a high level of maturity.

Again, as I wrote earlier, many people expect the Patriots to go offense in the first round. While the decision will ultimately play out depending on how the board shakes out, Taking an extremely talented front seven player (he reminds me of a young Jason Pierre Paul), isn’t a stretch at all. If the Vikings don’t take him at #14, the Patriots would be hard-pressed not to take a long hard look.

Rousseau’s highlight reel tape from the ACC Digital Network can be seen here: