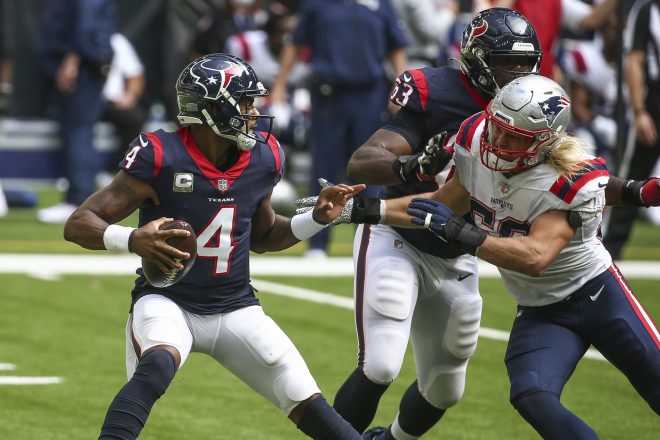 All indications seemed to point to a potential divorce between DeShaun Watson and the Texans, but it sounds like that might not be the case.

New GM Nick Caserio broke his silence on the matter on Friday, making a statement publicly that the team intends to move forward and they plan on Watson being part of their future.

Caserio said on Friday that he wanted to emphasize the commitment the team has to their veteran QB, and they have “zero interest” in trading him.

“And, you know, we have zero interest in trading the player. We have a great plan, a great vision for him and for this team and his role on our team. We look forward to the opportunity to spend more time with him here this spring.”

Watson has removed all traces of the team on social media and first expressed his frustrations when Caserio was signed earlier in the month as their new general manager.  Since then, he Tweeted on January 19th that “I been trying to have some patience, I told my momma she should pray on it.”

His issues have seemingly stemmed from a lack of communication by ownership and upper management.  It started last March when the Texans traded wide receiver DeAndre Hopkins to the Cardinals without making Watson aware of the deal until after it happened.  It apparently happened again when Watson was not again involved in either the GM or the head coach hires.  Caserio’s acquisition seemed to be the breaking point, with Watson Tweeting, “some things never change….” just after the news was announced.  He’s since deleted that Tweet.

For now, it will remain an interesting story to follow but while the trade rumors continue to swirl, the Texans appear committed to keeping Watson around.  Caserio has made it clear that he has a vision moving forward and plans on putting together a group to help his quarterback get an opportunity to start competing for a championship.  But whether or not Watson’s willing to agree to that remains the biggest question for Houston heading into 2021.