2 years ago at 10:14 am ET
Follow @MarkMorse5
Posted Under: Patriots News 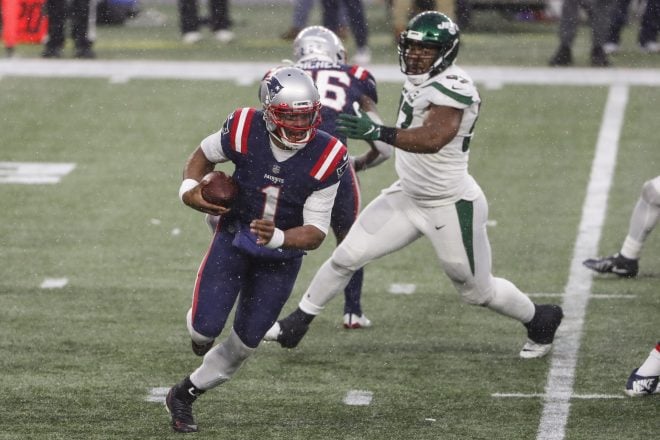 Some Thoughts on The Season Finale:

What we saw on Sunday was how I thought Cam Newton would play in the Patriots offense.  I expected short passes to the backs and tight ends.  It was James White’s signature move, an arrow route for his only receiving TD this year.  I thought White would have a year like Christian McCaffrey did while Newton was with the Panthers.  Even Sony Michel looked good as a receiver with 3 catches for 60 yards and a TD.  That swing pass from Newton led Michel perfectly and Sony caught it in stride to beat the defenders to the end zone.  Newton was 21 of 30, for 242 yards, 3 TDs and no interceptions.  His QB rating was 127.4, a far cry from those games he had under 50!  He added 11 carries for 79 yards with a big 49 yard run.  To put the cherry on the sundae Newton added that 19 yard reception on a perfect throw from Jacobi Myers for a TD.  More on Newton at the end of the article.

They have a total of 29 Free Agents – 22 Unrestricted, 3 Restricted and 4 Exclusive Rights Free Agents.

These are the players I think they should make a play to retain:

1) David Andrews is #1 on my list.  He is well respected throughout the league and could easily make more money outside of NE.  He is a team captain.  When he is in the game, the Patriots are a much better running offense.

2) JC Jackson is going to get a big payday.  I would like to see the Pats tie the Restricted Free Agent to a long term deal.  At the very least he gets a tender at the 1st round pick compensation.  Don’t be surprised if some team tries and come in with a poison pill type of contract that has language in it the Patriots just couldn’t match.

3) Next on my wish list is Lawrence Guy.  I know he is up there in age (he will be 31 next season), but he has indicated that he would like to return.  Bill Belichick likes to have that savory veteran D lineman on the team.  It’s the one position that he will allow an older player to mentor the younger ones and keep them a year longer than he should.

4) James “Sweet Feet” White is one of my favorite players.  He has had an underwhelming season this year and that’s directly related to Cam Newton’s poor passing.  He is hitting a tight market and there is a possibility that the Patriots could re-sign him.  He has indicated a desire to come back, but look out for Tampa Bay and Tom Brady.  They would probably love to have him as their 3rd down back.

5) I like the progress that Adam Butler has made since coming into the league as an UDFA from Vanderbilt.  He should be able to be re-signed easily.  Finally there are the two Special Teams players Cody Davis and Justin Bethel.  Belichick values Special Teams more than any coach I have seen.

6) These guys are special and combined with Matthew Slater form one of the best coverage teams in the league.  They will be small money deals.

Let’s look at the remaining players who may be re-signed or not by the Patriots:

It Starts with Franchise Player Joe Thuney.  He played well under the Franchise tag, but they will not re-tag him and won’t pay the money he is going to command on the open market.  Jason McCourty’s play has fallen off this year.  Myles Bryant has shown he can play at this level.  De’Angelo Ross and Michael Jackson could easily replace J McCourty.  They even signed a player this week in Dee Virgin from West Alabama (where have I heard of that school before).  Don’t forget JoeJuan Williams who can play CB as well as Safety.

Rex Burkhead suffered an ACL injury in what was turning into his finest year for the Patriots.  There is little chance he is re-signed, especially with Brandon Bolden coming back from Opting out.  Both players will be 31 next season.  Although Burkhead contributes on some Special Teams, Bolden is a key contributor on all 4 ST units.  Jermaine Eluemunor started the season at RT and he is just 26 with 4 years’ experience.  They may try and retain him, but if the cost gets too much they will let him go.

John Simon is just not stout enough at the edge and will be allowed to sign elsewhere.  Terrence Brooks has been a good ST contributor but the Pats have Patrick Chung coming back so there is no need for him.  Damiere Byrd has had a nice season, but at 5’ 9” 180 lbs he gets knocked around too easily.  His 47 catches for 604 yards should get him a contract elsewhere.  He is supposed to be a speedster but his game speed never showed that.

Shilique Calhoun was another disappointment.  Another who couldn’t set the edge.  Brian Hoyer has been a good soldier and backup at QB.  He showed this year that he just doesn’t have it anymore.  Don’t think he will be back.

Nick Folk earned himself a big payday.  He was almost forgotten and out of football.  He finished 31 of 33 in FGs and 2 of 3 beyond 50 and a game winner vs Jets.  Don’t be surprised if he re-signs with the Jets.  Brandon Copeland was expected to contribute but injuries took him early.  He will be 30 next season.  I would like to see him back but the Pats will not offer more than the minimum for him.

Carl Davis showed a lot when he played.  Keeping him healthy is the problem.  He has history of concussions which just might end his career.  Marcus Martin was signed late in the season.  He is going into his 7th season and has good size for an OC.  He may be a cheap signing as a backup or insurance should Andrews go elsewhere.

I did not realize James Ferentz was 31 already.  Little chance he is re-signed strictly on age.  Dietrich Wise has been an enigma.  He is a classic tweener.  Not fast enough to be an edge, not stout enough to be a DT.  His best value was as a DT in passing situations.  Can’t see him being re-signed.

Jordan Thomas will probably not get RFA offer from the Pats.  Tashawn Bowers is another in the long list of edge players that just can’t hold the edge.  Doubt he will be offered a RFA offer.  Terez Hall, JJ Taylor, Myles Bryant and Jakob Johnson are all Exclusive Rights Free Agents. Meaning they will all be re-signed.

First let me say that Newton has been very up front and entertaining with the media.  Always accessible, is accountable, appeared to work diligently and was honest.  Newton was awarded the Ron Hobson Award from the local NE media as the most cooperative player.  He was obviously a team leader and genuinely enjoyed playing football.  He came in during unbelievable time and circumstances.  The team was devastated with 8 Opt Outs.  He had no mini camps, OTAs or pre-season.  I honestly believe he tried his best.

His skills have diminished and his poor judgement and mechanics cannot be overcome with pure athleticism.  Will he be retained?  My immediate reaction is no.  I sincerely doubt any teams will come a calling for him after the year he just had.  His shoulder and foot ailments seem to of held up over the course of the season.  The question is what direction will the Patriots go in finding a new QB? If they wait till the draft, they might get a young QB to develop and would need a cheap veteran QB to start.  They paid Newton what they could because they were up against the cap.  Not top starter money because he is not a top starter.

My Patriots coverage will switch to concentrating on the draft and the roster building.  Look for articles twice a week on Tuesday and Friday and activity in the Draft Forum.