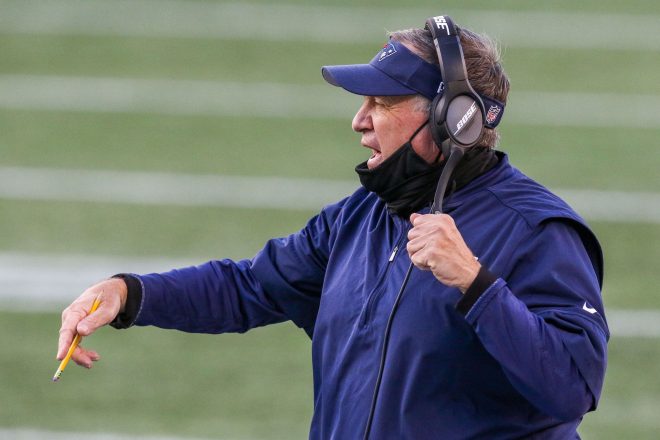 We hope everyone had a fantastic Christmas and that it found you all surrounded by healthy and happy family members.

Jedd Fisch: Congratulations to the Patriots QB coach who was recently hired to be the next head coach at Arizona. If his recruiting goes well, we all look forward to seeing some alumni for ‘Zona coming NE’s way.

Still Looking For a Great… if a Slightly Late Christmas Gift for a Patriots Fan? One of the great guys on Twitter and perhaps the best Patriots historian out there is Bob Hyldburg aka @BobtheStatMan Bob has been a friend of ours for about as long as I’ve been around PatsFans, nearly a decade now. Bob just wrote another book and it is one that is a perfect coffee table book that will be guaranteed to be opened every week during games, and that is “Relive Patriots History”. There’s still time… order one today.

Did You Know?… On tomorrow’s date in 1987, the Patriots beat the Miami Dolphins in South Beach 24-10. They held Dan Marino to just one late TD pass while picking him off twice. Steve Grogan completed 21-32 for 238 yards with 2 TDs and 0 INTs. Stephen Starring and Irving Fryar caught TD passes while Tony Collins ran for a score.

4th & 2 Podcast – If you haven’t checked out our PatsFans.com podcast, “Patriots 4th & 2” in a bit, please check it out. Russ, Derek, and I recorded a podcast on Thursday to talk about the future of the team heading into 2021.

With the Patriots officially out of the hunt for the playoffs, it doesn’t mean that hunting season is over. It is now open season on Bill Belichick. And for many people, it has been long overdue, as they’ve been weaned on the “let’s slam the Red Sox manager” even in years that they win the World Series. And they’ve been chomping at the bit to play the same game with the Patriots. One losing season has given them all the fodder they need.

But Belichick has been immune from that particular hunting season, due to a 20-year run of unparalleled excellence that saw him win the AFC East 17 times, go to the AFC Championship 13 times, go to nine Super Bowls and bring home six titles. At 6-8, the best the Patriots can do in 2020 is break even. But with the Bills coming into town tomorrow, that makes the job really tough. A loss tomorrow night guarantees New England will finish with a losing record for the first time since Belichick’s first year in 2000.

Belichick has never been a media darling, he’ll never be nominated for the “Good Guy” award by the media members who toil away at Gillette. He’s tolerated them (barely) and has always been closer to acting as surly as Jeff Dunham’s Walter than Mr. Happy. He hates releasing any information at all.

He’s made the players during minicamp wear numberless jerseys and then practices on the fields as far from the media guys in attendance as possible. I know, I’ve been there among them. And he’s admitted he hates social media.

“I hate social media,” Belichick said, he’s called social networks by made-up names (Snapface, My Face, Your Face), forever. “We get rid of it whenever we can, do things [where] you don’t bring your phone, you just have a conversation, [and] look the other person in the eye instead of texting.

Who cares how many ‘likes’ you get from 2,000 people you don’t even know,” Belichick said. “There are 53 guys in the locker room. Those are the 53 that matter, and I don’t know if that always gets through or not.”

But the grunts, snorts, and prolonged silences that are barely tolerated, at least publicly when they are going to the Super Bowl, but a losing season? Now he’s being questioned about everything as if the past 20 years didn’t exist.

He’s been adamant about sticking with Cam Newton as the starting QB and for the past month, he’s been asked about that too many times to count. This week on his regularly scheduled visit on WEEI, Lou Merloni tried a few times to ask the same question by rephrasing it. Belichick wasn’t having any of it and said, “Yeah I mean we’ve talked about that. … We’ve talked about that question. It’s been several weeks and we continue to get asked the same question. I’m done with it.”

Merloni wasn’t having any of his answers. He called Belichick a baby, but not while he was there, it was the next day. Some days, being pragmatic takes precedence over hot takes. About the only time, ‘EEI is topping the sports radio ratings is when Belichick or Newton are on the air.

Many people are saying that Belichick is like this because he’s losing this year. Not true. He hasn’t changed at all, but if he is even more snarky than usual, it is because some of the same media now question everything he does, just the Red Sox. He’s seen that before and isn’t having any of it. This next offseason should prove to be very interesting.

What To Do in 2021, Big Questions Abound With Opt-Outs:

The Patriots are out of the hunt in 2020, but if they hit on their draft picks and spend their cash (which they have plenty of) could vault them right back in the playoffs. But there is a lot of work to be done and many holes to fill.

First and foremost, is the QB situation is the main one that needs to be answered. Is Newton the bridge QB if they draft someone early in the 2021 NFL Draft or do they bring in someone else for the time being? There are several veteran QBs that could be had to be the placeholder until a draft pick QB is ready unless they want to sign someone like Dak Prescott that would require a lot (a real lot) of cash.

Other glaring needs include the Interior defensive line, which was a need a year ago when they had Danny Shelton. But Shelton left this spring and his replacement Beau Allen, never took the field this year, which, when you watch the struggling run defense, shouldn’t be a surprise.

Wide receiver is another huge need. Preferably one with the speed to stretch the entire field both horizontally as well as vertically. Tight End production has been zero this year. They also need help at Linebacker and the edge. Setting the edge sounds like an easy task but it has been anything but in 2020.

They haven’t made a decision on Newton yet. White was under-utilized this year. Guy and Andrews are very valuable as is Butler in their sub-packages.

Cannon with a cap hit of about $9.5 million dollars is a player who could be let go and the resultant savings would give them more cap flexibility. Michael Onwenu and Justin Herron have been very good at filling in at tackle, and they could very well be the RT and swing tackle (respectively in 2021).

Chung has been invaluable in his second go-around but with the additions of Adrian Phillips and rookie Kyle Dugger in 2020, strong safety isn’t a huge need. With Devin McCourty already stating he wants to return, free safety is a need down the road. Could Joejuan Williams be pressed into service as a free safety?

I believe LaCosse and Toran are likely gone. Bolden is a year older and despite being a stellar STs performer, they are already pretty well stacked there. Lee and Vitale are hardly locks. The biggest question is, what do they do with Hightower?

They definitely missed his versatility, his leadership, and toughness in 2020. They could opt for a clean sweep but I think he’ll be back for one more year.

It’s got to be at the top. I can’t think of anybody that’s done more than he has and that’s done it over a very consistent period of time at an extremely high level, in addition to all the other qualities that he brings off the field – leadership, just doing the right thing, just the person and the human being that he is. But, his competitiveness on the field, he’s a great teammate – just outstanding in all areas. It would be hard for me to imagine anybody going ahead of him. We’ve had some great players here and I’ve had some great players through my career – in Cleveland, going back to the Giants – but, he’s certainly the very best that I’ve ever been around and that we’ve had to play against, as well. His consistency is outstanding, but he factors in on a lot of plays.

Bill Belichick after being asked about Matthew Slater’s 9th Pro Bowl selection and his place in the NFL’s history for ST players.