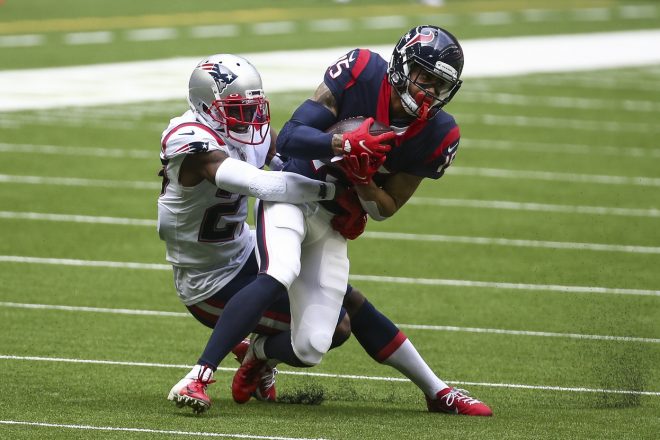 SOCIAL DISTANCING AT HOME — Whomever told you things like the Houston Texans having the worst run defense in the league, see how much holiday punch they were drinking.

And if someone told you that the Patriots have the best secondary in the league, they too are perhaps under the impression that Thanksgiving was last week and not this week.

The Texans, who used to routinely suffer embarrassing losses to the Patriots, especially in the postseason, have suddenly become a thorn in the side of the Patriots.  For the second year in a row, the Patriots have come to NRG Stadium in Houston, a building where they have won two Super Bowls, and have Deshaun Watson and the Texans draw and quarter them.  Watson had a stellar passing day, throwing for 344 yards and two touchdowns to lead Houston to a 27-20 win on Sunday afternoon.

The Patriots are now 4-6, and all the good will from last Sunday night’s win over Baltimore is pretty much gone.  The Patriots are probably out of most playoff discussions, given that three of their next four games are on the road, and their one home game in that stretch is against Arizona and still another mobile quarterback, Kyler Murray.

The Patriots were supposed to have bludgeoned the Houston defense with a lethal run attack.  Damien Harris was held to 43 yards rushing on 11 carries, and Rex Burkhead had to leave the game early in the third quarter with a knee injury.  James White did have 83 yards, but 64 of them were on pass catches including a 34-yard screen pass on the second offensive play for the Patriots.

Meanwhile, the “vaunted” Patriot secondary had no answer for Watson.  Watson connected on 28 of 37 passes and had a passer rating of 121.9.  Three Houston receivers, Brandin Cooks, Jordan Akins and Will Fuller V had 80 or more yards receiving.  Akins was the most puzzling of this, as he is a non-descript tight end who had a career afternoon.  Darren Fells and Pharaoh Brown, the other tight ends on the Houston roster, had four catches aggregate for 51 yards.  Surrendering 344 passing yards to Watson, whom you expect to beat you with his legs and not his arm, is something that should not be happening with the Patriot defensive backs out there.

Harris came off a career night against Baltimore by being not much of a factor other than a first quarter nine-yard touchdown run.  The Texans loaded up to stop the run and dared Cam Newton to beat them through the air.  Newton had a decent game, but once again he is snakebitten by a lack of offensive weapons around him.

Damiere Byrd was the top offensive weapon, which is indicative of how far off the beaten path the Patriot offense has gone.  Byrd finished with 132 yards receiving on 6 catches, including a 41-yard touchdown pass reception early in the second half.  But if Byrd is the top offensive option, that really bodes poorly for how bad the Patriot offense can be and what little Newton can do to win the game.

The Texans took Harris out of the game, and they did much the same thing to Jacobi Meyers.  He had three catches for 38 yards, 20 of them coming on a flea flicker.  Other than that, he was no factor in this game.  Without Harris and Meyers, Newton was forced to rely on Byrd for making the big plays.  N’Keal Harry had five catches for 41 yards, but again failed to show that he is a big play guy.  Burkhead was carted off the field early in the third quarter.  Only White was able to make big plays besides Byrd.

Defensively, the Patriots were bedeviled by bad tackling and bad pass coverage.  The run game wasn’t a factor, as Watson led the Texans with 36 yards on six carries.  The Patriots failed to sack Watson, and he was able to break free any time he had to.  But play after play, the Patriots exhibited bad tackling technique, allowing too many easy first downs.  Penalties hurt the Patriots also, as they were flagged seven times for 55 yards.

Big plays hurt the Patriots as well.  On their first drive of the game, Watson hit former Patriot Cooks for 44 yards against J.C. Jackson, then three plays later hit Skins for 22 yards on third and 10 with Jason McCourty defending.  On their second touchdown drive, Watson found Akins in the seam for 25 yards with Kyle Dugger defending, and then on the next play hit Cooks for 20 yards with Terrence Brooks in coverage.  All this was with Stephon Gilmore returning from injury, but no Texan receiver was shut down on the afternoon.

One factor that should not be discounted is that the Patriots faced a former assistant as the Texans head coach.  But it wasn’t Bill O’Brien, who was fired a few weeks back.  Instead, former defensive coordinator Romeo Crennel is in charge, on an interim basis (and has already been informed that he will not be considered for making him permanent next year).  Crennel coached like someone who knows Bill Belichick quite well, and trotted out a very sound game plan, especially on the defensive side of the ball.

The Cardinals come to Foxborough next Sunday, a team the Patriots don’t see too often.  Once again, the Cardinals won’t have to deal with Tom Brady, as Jimmy Garoppolo was at the helm in the 2016 season opener out in Arizona, and the Patriots came away with a close victory.  The Patriots have never seen Murray, and the Patriots may have to hope that another rain squall hits like last week when Lamar Jackson was in town.

The Patriots have to somehow pick themselves up and stay motivated to try and win games despite things looking very bleak for a playoff berth.  This is a transition year for the Patriots, and greatness has been more sporadic and less sustained.  This will be a severe test for the Patriots, make no mistake.

The Texans came out and whipped the Patriots when logic and numbers on a sheet of paper suggested otherwise.  Sunday’s loss was more disappointing than anything else.  The Patriots are not what they used to be, and are still trying to figure out what they are right now.

Whatever that is, the result is 4-6.  You are what your record says you are.  I heard someone say that once.

READ NEXT:
“After Further Review”, the Patriots Crash and Burn in Houston
Posted Under: 2020 Patriots Season