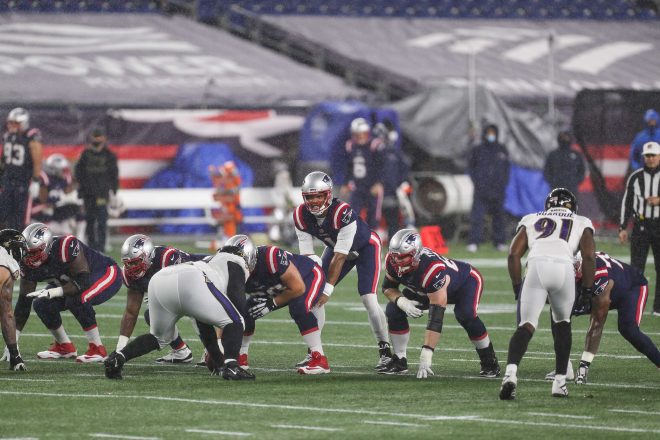 The Patriots head to Houston and look to win their third game in a row and even their record at 5-5 when they take on the 2-7 Texans on Sunday afternoon at 1:05 p.m. The team feels like they’ve turned a corner and can climb back into the playoff picture with a win this weekend.

This week’s game will be broadcast by CBS and can be seen locally on WBZ-TV. Andrew Catalon will handle play-by-play duties with James Lofton as the color analyst. AJ Ross will work from the sidelines. The game will also be aired on the Patriots flagship radio station 98.5 The Sports Hub with Bob Socci and Scott Zolak on the call, produced by Marc Capello.

The Patriots have a 10-2 record against Houston overall and are 2-0 against them in the postseason. Last year, the Texans beat the Patriots 28-22 in Houston.

The Patriots (4-5) beat the Baltimore Ravens 23-17, Damien Harris was very impressive once again, piling up 121 yards on the ground. Rex Burkhead had a pair of touchdowns while the defense held the Ravens to just 17 points and 25 fourth-quarter yards in the impressive win.

The Patriots running game had a very impressive game, garnering 173 yards on the ground against a very stout Ravens defense that knew they were going to try to run on them. This week, they’re facing a Texans defense that is at the bottom of the league in terms of opponent’s rushing attempts, rushing yards allowed (a whopping 167.4 ypg), and rushing yards per attempt.

The Patriots will once again feature a heavy dose of Damien Harris, Rex Burkhead, with some Cam Newton mixed in. Harris has been terrific since coming off of IR in Week 4 with three 100-yard games in the past six weeks.

Despite J.J. Watt and Whitney Mercilus still being on the defense, they’ve struggled badly to stop opponents. The linebacking crew of Mercilus, Tyrell Adams, and Zach Cunningham have been very inconsistent. The feeling here is that Harris and Newton will have very productive days running the football.

The Patriots passing game has been trying to get untracked since Week 2. But they’re showing signs of getting it together, albeit in a conservative, supporting role. Cam Newton has improved over the past couple of games and it is a good sign for things moving forward. Jakobi Meyers has been terrific and has created some very nice chemistry with Newton. Damiere Byrd, Burkhead, and James White are complementary pieces along with TE Ryan Izzo. It bears watching if Isaiah Ford can work his way into the lineup. Julian Edelman is eligible to return from IR this week.

Houston’s pass defense has struggled as badly as their run defense. But a lot of that has to do with how bad the run defense has been. As a result, they are susceptible to play action. Watt and Mercilus lead the pass rush but it hasn’t been enough to make a major difference.

The Patriots offensive line is healthy and playing well, the feeling here is that they’ll win the battle up front in the running game. If they can keep the pass rush away from Newton on Sunday, they should be able to find plenty of room to throw the ball effectively. Meyers and Byrd should keep the chains moving.

One thing to keep in mind is the “RAC Factor”, or the Romeo Crennel factor. He and Bill Belichick are best friends and coached together for a long time. He did a great job of holding the Patriots down in their 2016 playoff game, one where Tom Brady gave Crennel credit for a tremendous game. He also kept the Patriots under wraps last year as the Texans were up 28-9 after three quarters.

The Patriots’ run defense has been bad all season long but played much better against the Ravens on Sunday night, limiting them to 55 yards under their season average. Carl Davis, albeit in a limited role on Sunday night finally provided that big man in the middle of the defensive line. Getting Lawrence Guy, their best defensive lineman back from injury was huge. Linebackers John Simon and Chase Winovich were outstanding. It gives, at least for one week, the optimism that they can get things turned around.

The Texans, by playing from behind for most of the season, have had to abandon their running game too early in the majority of their games. However, David Johnson, the running back they traded DeAndre Hopkins for is not on IR. Duke Johnson, who is more the third-down back has been pressed into duty. He’s been out with an illness but should be back on Sunday.

The Patriots should be able to contain the running game of Houston that has averaged only 87.9 yards per game this year. One factor is Deshaun Watson, he’s mostly run on scrambles but can be dangerous past the line of scrimmage.

The Texans’ passing game has very good (but not great) wide receivers. The dangerous Will Fuller, Brandin Cooks, Randall Cobb in the slot, Kenny Stills, and Darren Fells at tight end are a talented group. Having Hopkins made them extremely dangerous and among the best. Watson can extend and make plays with his feet. They can move the ball through the air and challenge any defense. He’s completed 68.9 percent of his passes for 2539 yards with 18 TDs and 5 INTs.

The Patriots secondary has the depth to challenge them if they have everyone healthy and ready to go. Stephon Gilmore has missed the last three games so, we’ll see if he’s ready to go. If so, he’ll be a big boost to a secondary that is among the strengths of the team. J.C. Jackson has had an interception in five straight games, a Patriots record.

Look for Watson to have a big day, he’s given the Patriots problems each time they’ve played against him. Only of the keys, this week will be seeing what role Kyle Dugger is asked to play. He’s improving every time he steps on the field and could play a big role this week.

The Patriots’ Nick Folk and Houston’s Ka’imi Fairbairn are both having solid seasons. Both missed kicks last week in troublesome field conditions. Jake Bailey has been outstanding for the Patriots and gets the slight edge over Brian Anger. Both teams have solid coverage units and neither has generated much in the return game. Gunner Olszewski returns nearly every kick out of the end zone but rarely gets to the 25-yard line it seems. Houston had DeAndre Carter returning kickoffs and punts but they released him this week.

This game will be an intriguing one. The Patriots should be able to run the ball and control the clock against Houston’s defense. But the feeling here is that Watson is going to have another solid game against the Patriots and keep this one close.

Houston has won only two games this year, both against Jacksonville. But they have managed to keep most of their games due to Watson and their offense. If they do win on Sunday, you can expect that Watson once again had a huge day.

Talk about how much has changed in the last year. When the Patriots and Texans meet on Sunday afternoon, New England will have 15 different starters than took the field against the Texans last December 1st, less than a year ago.

Run, Run, and RUN the Ball More – The Patriots offensive line should dominate this match up in the running game. They need to pound the ball against a very suspect run defense, control the clock, and wear them down.

No one has given up more yardage, runs per carry, and rushing attempts than the Texans. Look for Damien Harris and Burkhead to have big days on the ground. Maybe mix in some jet sweeps with Harry, Ford, and Meyers.

Bring Controlled Pressure on Watson and Force the Issue – The Patriots haven’t been great at rushing the passer, but this is a week where they should bring the extra rusher and try to force Watson in getting rid of the ball early.

This would be a great week to get young players Josh Uche and Kyle Dugger to use some of that athleticism along with Winovich to work in their favor. Possibly force a turnover or two.

No Turnovers, Penalties – The Patriots can’t afford to be turning over the ball the way they were during that 4-game losing streak. They are not a team that is built from playing behind. So they have to cut out those turnovers (zero last week) while forcing a couple of their own. One bright spot for the team has been their lack of penalties. They are currently on pace to having the fewest penalty flags of any Patriots team. They can’t extend Texans’ drives with penalties or skewer their own drives with those holding calls that can stop them in their tracks.

The Patriots’ offense should be able to move the ball well and control the clock, and the tempo. Watson’s fireworks will keep them close and within striking distance, but the defense will get enough stops.   Patriots 27-20