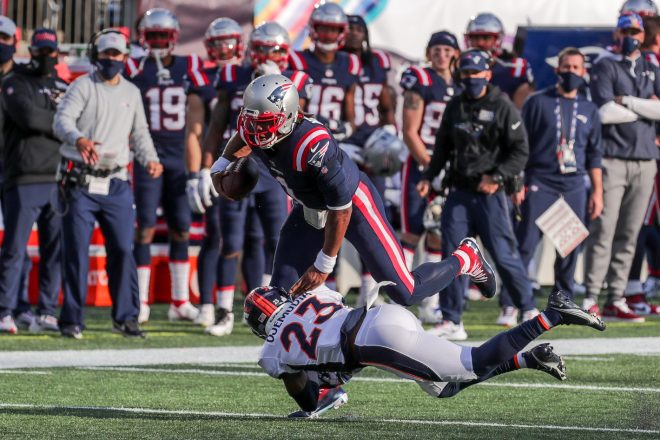 Some teams can get by without practice, but in a transition year, the Patriots certainly aren’t one of them.

After two difficult weeks where positive player tests shut down the facility and saw them play one game without their starting quarterback, the Patriots came into Sunday’s match-up with Denver a bit unprepared.  Cam Newton hadn’t seen game action since their match-up with the Raiders nearly a month ago back on September 27th and it was painfully obvious.  After testing positive for COVID-19 and missing their game against Kansas City three weeks ago, Sunday finally marked his return and he definitely seemed a little rusty.

It was a tough afternoon overall and here are some thoughts coming off the loss:

1) It was a rough day for Newton, who finished Sunday’s game 17-of-25 for 157 yards with two interceptions, with the veteran looking shaky to say the least.  Newton appeared out of sync in the offense and the worst part was his poor awareness in the pocket.  The veteran quarterback was seemingly unaware of the pass rush as the Broncos came after him, including one play where he took an unnecessary sack that ultimately also knocked out Jermaine Eluemunor.  On the play, Newton took a vicious blindside hit that he never saw coming and as he went down, he rolled up on the back of Eluemunor’s right ankle.

That left Eluemunor screaming out in pain and writhing on the ground, taking off his helmet and pounding his fist as trainers immediately ran out to check on him.  He ultimately left with some help but couldn’t put any weight on it before heading to the medical tent and subsequently leaving for the locker room.   The team later reported it was an “ankle” injury and he didn’t return.

That set off a domino affect where players shifted around and it severely hampered pretty much everything they tried to do for the remainder of the game.

But what was unusual for a player who is 6’5″, Newton also saw himself get quite a few of his passes batted at the line, which it seemed to be obvious that the Broncos had potentially game-planned for Newton’s low release as the defensive linemen had their hands up and made it tough for Newton to throw over them.  They also were disruptive and made his life fairly miserable, with Newton doing what he could with his legs after rushing for 76-yards along with the team’s lone touchdown.

For anyone hoping that the Patriots would perform at the level the Tennessee Titans played at after they too had limited practice time following their own COVID outbreak, there’s a clear difference.  The Titans have a group offensively that has played a lot of games together and they have far more continuity from that standpoint, which makes a massive difference.  Meanwhile, New England has a quarterback who had played just three games with a completely new team and a fully revamped offense prior to being sidelined.  Needless to say, they haven’t had much time to adjust and both Newton and the rest of the offense are still figuring things out. Sunday was simply a reminder that they still have a long way to go. 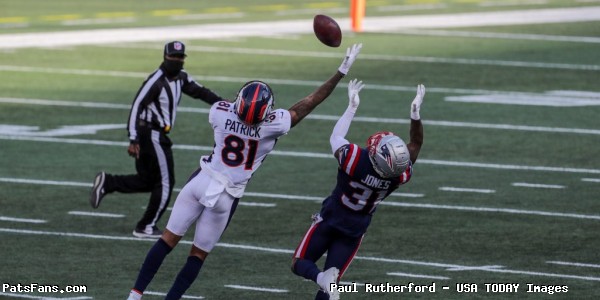 2) While the offense did little in terms of putting up points, the defense did everything they could to keep them in the game.  It was obvious Denver clearly came into this contest with the intention of attacking New England’s defense on deep pass plays, which they did from the first series and they tested the Patriots secondary for much of the afternoon.  They had some success early, with Broncos quarterback Drew Lock hitting Tim Patrick on a 41-yard pass on the second offensive play of the game.  That set up a quick scoring opportunity but the Patriots defense clamped down in the red zone and forced a field goal.

That was basically the story of the game.  Lock kept slinging it, but he had a tougher time as the game went on and the defense did good job of making things tough each time they got down in scoring territory.  They also forced two turnovers, with both J.C. Jackson and Jonathan Jones each picking Lock off.  Jones’ pick was impressive because he made a terrific play on the football on another deep attempt by Lock.  Lock went after Jones several times Sunday and that turnover was a bit of redemption given that Denver’s QB seemed to feel he’d have success attacking Jones, yet the veteran cornerback really had a great game.

What’s crazy is that Lock was just 10-of-24 throwing the football but most of those yards came on a handful of chunk plays, so the defense held up their end of the deal.  Unfortunately, they just didn’t get any support from the offense.  To hold a decent team like Denver to just 18 points thanks to forcing six field goal attempts and no touchdowns, that should have been enough to win the game.  But when you only score 12 points, it makes for a frustrating day and not being able to get into a rhythm obviously came from not being able to practice.  But give the defense credit, they were definitely the bright spot in this one.

3) It looks like Brian Hoyer has fallen out of favor with the coaching staff following his performance two weeks ago against Kansas City, as Jarett Stidham was elevated up the depth chart and was the back-up on Sunday behind Newton.

It’s well-known that Hoyer is an asset behind the scenes in terms of the team’s preparations and how well respected he is in the locker room.  But Stidham appears to have supplanted him again after a pretty good outing when he came on in relief against the Chiefs following a couple of mental errors by Hoyer that ultimately ended him up on the bench.

Under normal circumstances, Hoyer might have found himself on the outside looking in and looking for work but thanks to the pandemic, running with just two quarterbacks is less than ideal this season.  Fortunately, for Hoyer, that will likely guarantee him at least 11 more games on the roster but it’s obvious that his future beyond this season is likely in doubt.

4) Kyle Dugger had a big challenge on Sunday against what appears to be a pretty good tight end in Albert Okwuegbunam, who made a couple of good plays against him.  Okwuegbunam is a big player and at 6’5″ 258-pounds showed some pretty decent speed and quickness. He reportedly ran a 4.49 40-yard dash at the combine prior to being drafted earlier this year and he certainly looked the part.  Dugger had a tough battle against him and the rookie 4th round pick made a couple of nice receptions and nearly had a touchdown after Lock took advantage of Okwuegbunam’s height (Dugger is 6’2″) as the tight end went up high just behind Dugger but couldn’t quite come down with the football.

It was a pretty good debut for Okwuegbunam, who finished with 2 receptions on 6 targets for 45-yards.  It was the rookie’s first game action thanks to the fact TE Noah Fant was out with an injury and it was a pretty good effort.  Give Dugger credit, he held his own against his fellow rookie but for anyone who enjoys keeping an eye on potential future NFL stars, Okwuegbunam looks to possibly be another bright spot at the tight end position. 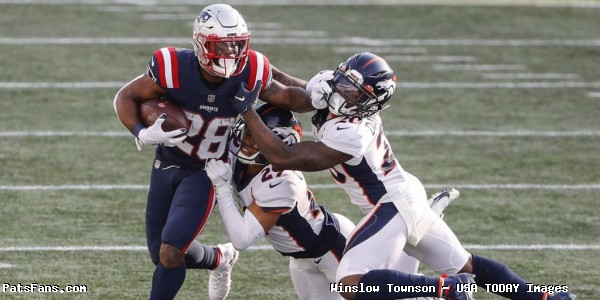 5) The Patriots receiving corps remains a work in progress, but it’s hard not to start getting a little concerned.  Julian Edelman got a lot of attention on Sunday by Denver’s defense, making him essentially invisible while leaving Newton to try and find Damiere Byrd, N’Keal Harry and Isaiah Zuber.  They spent much of the game battling to get open and Newton got little help at the tight end position, with only Ryan Izzo as the target they seem to trust.  Izzo actually got banged up early and came out for a spell, but he almost immediately returned and did about as much as could be expected.  However, his biggest gaffe of the game came on a play late in the third quarter where he picked up 16-yards on a 3rd-and-3 but couldn’t put the ball away and lost it as he was taken down, giving Denver the football and killing the drive.  That was brutal because that play would have put them in Denver territory with a shot to get back in the game.  Instead, it was simply a squandered opportunity.

But they’re getting little in the way of any contributions at that position to take the pressure off any of the other players in order to try and create any type of favorable match-ups.  As a result, it left Newton in the pocket for extended periods and that’s one of the reasons why the Broncos were so successful.  Unlike past weeks, they kept Newton from getting outside and making plays down the field, which prior to Sunday had seemed to at least be an area where they had some success.

In fact, Newton actually ended up being a receiver on Sunday after a trick play where he threw to Edelman, who turned around and fired a pass down the field for 16-yards to Newton after he slipped out into coverage and came up with a key reception and converted a 2nd-and-13 on their final drive of the game.  That was their final bright spot of the afternoon after he threw incomplete to Edelman on the next play, got sacked and then hit James White for 6-yards before misfiring on a 4th-and-10 to Harry, who had his man beat but Newton overthrew him.

Maybe more time will be what the doctor ordered but as it stands right now, they appear to be painfully undermanned.  James White led all receivers on Sunday with 8 receptions for 65-yards, most of which came on short screen passes behind the line of scrimmage where White made his own yards after the catch.  The rest of New England’s receivers did very little and struggled to get open against Denver’s defense.  That’s been somewhat of a theme and they’ve been inconsistent at best.  Newton has expressed confidence in his guys, however, they definitely need to step things up if they hope to get back above .500 and play football in January.

Bill Belichick expressed the importance of getting work in on the practice field and they’ll definitely need this week to figure things out personnel-wise and to regroup. They’ll next see Jimmy Garoppolo and the San Francisco 49ers visit Foxboro next Sunday at Gillette Stadium.