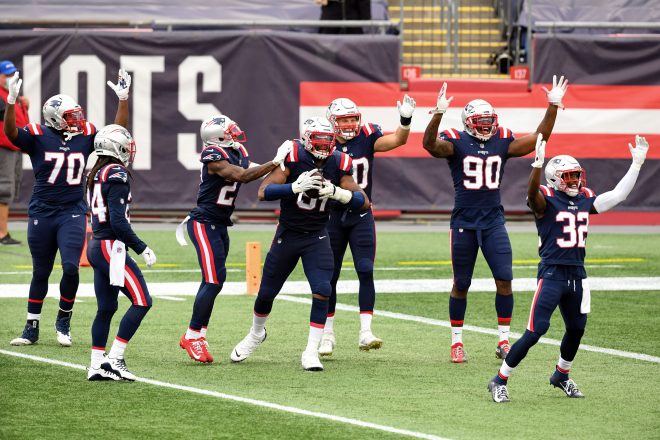 In our post-game analysis right after the game, I wrote “what a difference a week makes” and it is very true. Last week the Patriots running game couldn’t get untracked and the backs accounted for a mere 20 yards on the ground.

In the Patriots running game on Sunday afternoon that rolled up 250 yards on the ground, the backs accounted for 209 yards on 26 carries. That is some production. The defense forced three turnovers and scored a defensive touchdown. The coaches did some nice in-game adjustments, but despite in essence a blow-out win, there was a lot of things that need cleaning up before the team heads to Kansas City

This is a broken record but I really wish the NFL would release the All-22 a bit earlier instead of having to rely on just the broadcast video for our reviews…but it is what it is. Here are our grades this week for the Patriots-Raiders game.

Cam Newton looked out of sorts for much of the game, his accuracy and decision making were off. And other than a few runs, (one a big 21-yarder), he was held in check.  He made a poor decision on his interception after getting flushed out of the pocket. He tried to jam a pass between two defenders and it was easily picked off. If he looked just beyond the intended receiver Rex Burkhead, Devin Asiasi was all alone with nothing but green in front of him.

As mentioned above, Newton was bottled up for the most part in the game, the Raiders made it their game plan, much like the Patriots do, and decided to take him away, but he looked a bit better in the second half. But as Newton said after the game, the Patriots have a lot of different players they can utilize in the offense.

The Patriots running backs all saw nearly the same amount of snaps and all of them were productive on Sunday. Each of them brings a different skill set to the table and they did a really good job of getting everyone involved.

After a slow start with Sony Michel, rookie J.J. Taylor came in and gave the offense a nice and badly needed boost. He had a couple of splash plays and took the Raiders offense outside. Sony Michel returned later and had arguably his best regular-season game as a Patriot. He carried nine times for 117 yards including huge 38 and 40-yard gains. Michel broke tackles, showed good vision, made jump cuts, and made people miss. 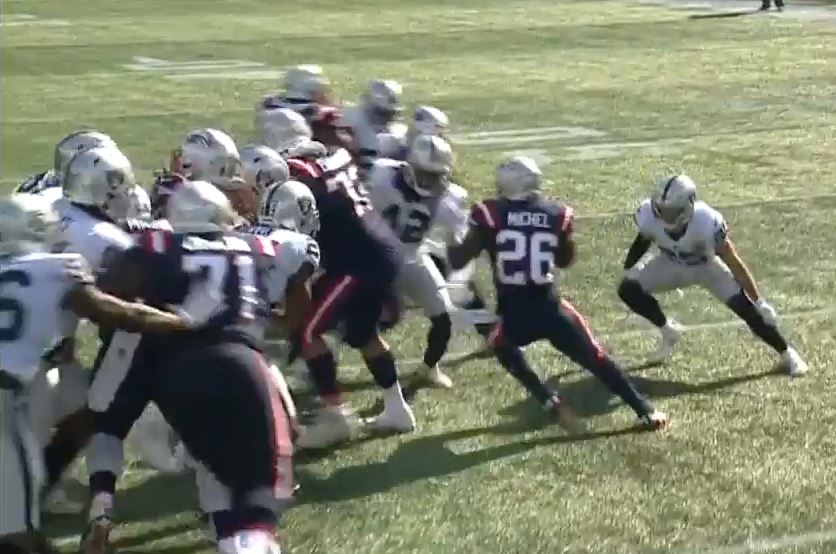 Sony Michel makes a nice jump cut with seemingly nowhere to run and breaks back to the inside. (NFL Game Pass screenshot)

But Sunday belonged to Rex Burkhead. Burkhead had a career day with three touchdowns with six carries for 49 yards and two touchdowns and seven receptions for 49 yards and another score. The Raiders were gashed by him again and again. Jakob Johnson did yeoman type of work in the running game as a blocker.

That was the good news… and the even better news is that Damien Harris is eligible to come off of IR this week. And James White could return to the team this week after the death of his dad in a car wreck where his mom was put in intensive care.

The Patriots wide receivers were nearly invisible in the passing game as the Raiders did an outstanding job of shadowing them all day. Julian Edelman after a career game last week had just two catches for 23 yards. N’Keal Harry had two catches for 34 yards, while Damiere Byrd had three catches for 27 more.

Rookie Isaiah Zuber appeared in his first NFL game and got a carry on a jet sweep and gained 13 yards. But the wide receivers bought into the run game and blocked well downfield all game long.

“O” stands for zero. The Patriots tight ends once again had zero production. As we mentioned above, Newton didn’t see Asiasi on his interception and he had all kinds of open space in front of him. Ryan Izzo got a bit of glare from Newton when running a wrong route down on the goal line and then dropped the pass, albeit a fastball.

However, both Izzo and Asiasi did a very good job in the running game as blockers. They both were helping spring the backs as they rolled up defenders trying to stop the backs. But moving forward, the offense, the coaches, and the quarterback needs to get them more involved in the passing game. 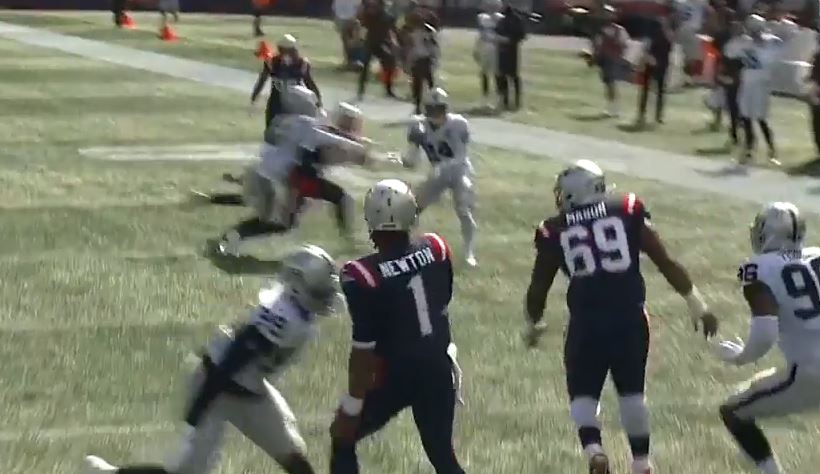 The offensive line like the entire offense started slowly but they finished very strongly and had a very good day in the running game with the team tearing it up for 250 yards, and Newton didn’t have a big part of that this time.

With David Andrews placed on IR, Joe Thuney (please pay the man), slid over from left guard to center while 6th round rookie OL Michael Onwenu started in Thuney’s spot at left guard. Watching a 335-lb guard pull and get downfield is impressive, as this rookie is. He did a very solid job.

The Raiders did get some pressure on Newton with their pass rush and got a pair of sacks but the OL asserted their will on Sunday and the Patriots controlled the line of scrimmage for the final three quarters.

The defensive line was getting gashed by the Raiders running game and Josh Jacobs in the first quarter. But then they did a strange thing and went away from the ground game to attempt to throw more. Went they tried to go back to the run later, the Patriots did a better job of defending it, although it remains a question mark moving forward.

Deatrich Wise scored his first touchdown after recovering a fumble in the end zone. Bill Belichick singled out Wise as having improved his run defense this season. The line was getting some good penetration upfront on Derek Carr and bringing some pressure on the depleted offensive line of the Raiders. 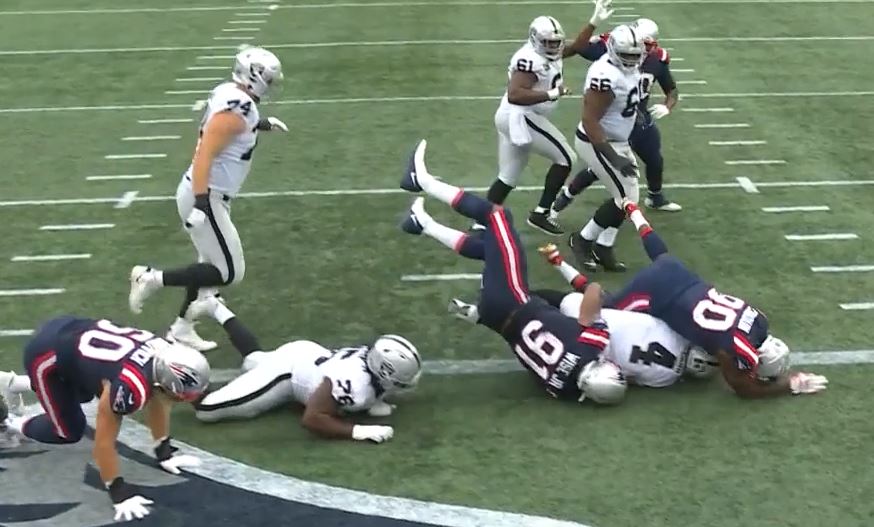 The Patriots linebackers had a much better game this week. Edge defender Chase Winovich is quickly growing into his role in Year 2 and is becoming their go-to guy in the front seven. He had a strip-sack and a couple of QB hits. Former Raider Shalique Calhoun had a big game with two forced fumbles. The first of Josh Jacobs took points off the board, and his second in the endzone resulted in a Patriots touchdown.

On the not-so-great side, Brandon Copeland got burned badly by play action and allowed tight end Foster Moreau to score a touchdown. Ja’Whaun Bentley was the only front seven player to be on the field for 80 percent of the snaps (47 of 59).

The Patriots secondary had a better game this week but hardly clean. Jonathan Jones was going against Hunter Renfrow and allowed six catches for 84 yards and a TD, where Renfrow was mainly covered by Jones. Stephon Gilmore was flagged again for a 28-yard pass interference call.

But the game plan was to take away Darren Waller and the Patriots coaches, utilizing seven different players who covered the uber-talented tight end blanking him for 56 minutes until he made a pair of garbage time catches. One Raiders writer openly questioned whether Joejuan Williams would be “another Belichick 2nd round bust” Williams covered Waller for much of the game and he’s far from a bust.

Adrian Phillips had a big game playing the hybrid safety/linebacker role and he and Jones led the team with each logging seven tackles.

Nick Folk seemingly got back on track going 3-3 on short field goals, but later missed an extra point. Jake Bailey had another solid outing and the coverage units were superb. Justin Bethel fired down on a kickoff and tackled the returner at the 12-yard line, where a penalty moved the Raiders back to the six. The strip-sack on the ensuing play resulted in Wise’s touchdown…game over.

Winovich had a head’s up play by recognizing a Raider jumped offside on a punt and reacted, giving the Patriots a fresh set of downs.

The Patriots coaching staff did a solid job this week. Although they didn’t start well, they recognized where changes needed to be conducted and made the necessary adjustments. Josh McDaniels called a strong game and utilized the strengths of his deep group of running backs, keeping the Raiders guessing.

We’re on to Kansas City and the world champs this week.