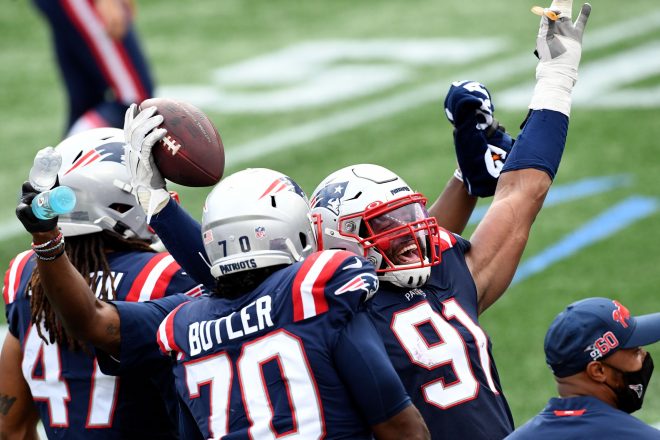 Heading into Sunday’s game against the Raiders, one of the biggest concerns was how the Patriots would deal with Las Vegas’ ground game.

Instead, New England turned the tables and gave John Gruden’s bunch more than they could handle with their own rushing attack after putting up 250-yards in a 36-20 win at Gillette Stadium.

Here are some thoughts on Sunday afternoon’s game:

1) With Sony Michel seeing little action early on in this one, the Patriots saw some terrific bursts from J.J. Taylor, who broke off some solid runs and continues to show he can contribute in this offense.

That seemed to light a fire under Michel, who came into Sunday’s game with more energy than we’ve seen in recent weeks.  Michel ran with more explosion as he seemingly continues getting healthy, breaking off a couple of long gains, one of which went for a career-high 48-yards late in the third quarter, his longest run since he broke one off for 40-yards during the 2018/19 postseason in the Divisional round against the Chargers.

With a stable of talented running backs, Michel hadn’t done much to really stand out to this point in the season and it was good to see flashes of a player who had high expectations given where he was drafted.  He also had some success in the passing game, catching two passes from Cam Newton for 14-yards and looked comfortable in that role.

As a result, it was good to see Michel start settling in, which will be much needed in the coming weeks.  Overall, with Taylor leading the team in carries with 11, Michel carried the football 9 times for 117-yards and showed everyone that he’s still dangerous in New England’s backfield. 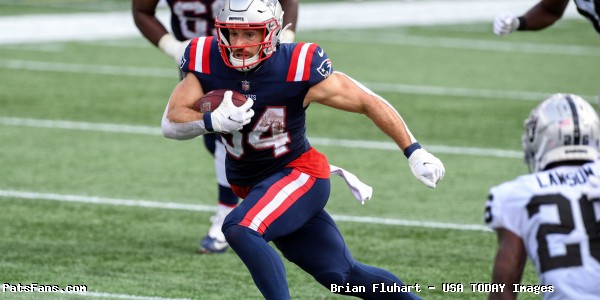 Burkhead had a solid outing on Sunday.

2) Rex Burkhead’s injury history has been frustrating over the years, but there’s no doubt that he’s still explosive when he’s out on the football field.

With James White out again as he continues dealing with the death of his father and his mother hospitalized, Burkhead saw plenty of action on Sunday and he certainly made the most of it.  He carried the football 6 times for 49 yards and a touchdown, and he was also targeted 10 times with 7 catches for 49-yards and a receiving touchdown.

This was the best Burkhead has looked in a while and he showed some impressive quickness, as well as some unbelievable acceleration as he broke through the offensive line and took off upfield.

Burkhead accounted for all the team’s scoring on Sunday with three touchdowns (2 on the ground, one receiving) including one play where he essentially crowd-surfed his way into the end zone after he leaped into the air and went over quite a few bodies as he crossed the goal line.

It was a solid effort by a player who has a lot to prove as he heads into the final year of his contract.  But given that the Patriots needed a lift with White out of the line-up, it’s safe to say that Burkhead definitely delivered.

3) It might be a little early to anoint Chase Winovich to any type of status, but he continues to grow each week and had another solid outing on Sunday against Las Vegas.

What’s so impressive about Winovich is his power, with the second-year player spotted tossing defenders aside as he forced his way into the backfield.

One of his best moments on Sunday came on a play where he came off the edge and with a defender on him, Winovich used one arm to push his man off of him and the other to reach out and take down Derek Carr.

As Carr went down, he lost the football and Lawrence Guy came up with the turnover.

People talked about the fact that Winovich was known as a high-energy guy during his time at Michigan and he plays every snap with the same intensity.  But there’s no question that we’re seeing the evolution of a player who appears poised for big things.

So far, he’s been more than an edge rusher and he’s been even more disruptive than anyone could have expected.  And he’s not only good at getting pressure, he’s also been solid up front against the run.

Could he be New England’s next star defensive player?  It certainly appears that he’s headed that way.  He’s definitely exceeded most expectations at this point and it’s going to be fun to see just how good he ends up being by the end of the season. 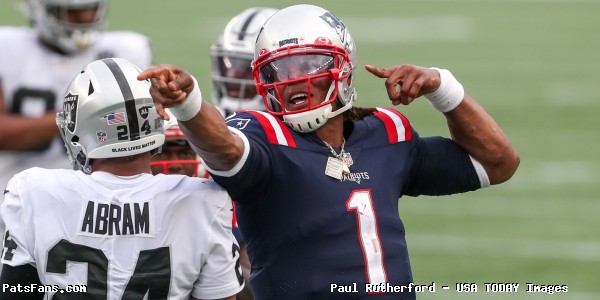 It wasn’t Newton’s best performance, but they’ll take the win.

4) Meanwhile, on offense, it wasn’t Cam Newton’s best performance.  He made an egregious error in this one early on after making an ill-timed throw that saw him fire the football directly into the hands of Raiders safety Johnathan Abram.  Abram ran it all the way back to the Patriots 14-yard line and it led to a field goal by Las Vegas and gave them the early lead.

Overall, it was a tougher day for the veteran quarterback, who didn’t have nearly the amount of success he enjoyed a week ago.  He finished the afternoon with just 162-yards passing after completing 17-of-28 (61%) with a touchdown and an interception.

Offensively, it wasn’t pretty.  The Patriots were just 3-of-9 (33%) in the first half on third down, which saw Newton complete 2-of-6 of his third down attempts over that span.  It was also frustrating because we saw him forcing the football into double and even triple coverage, which is something that prior to Sunday we hadn’t seen.  He nearly got Julian Edelman killed on a couple of throws where he ended up getting drilled when Newton forced it in there with multiple defenders on top of him.

However, give Newton credit.  He played better in the second half after completing 7-of-9 for 72-yards, helping the Patriots take control of the game before eventually pulling away.

For the Patriots to be successful, they really don’t need Newton to dominate the game, but they just need him to play well and minimize the mistakes.  So far, he’s someone who seems to know his limitations and given what we’ve heard from him, he definitely takes the miscues to heart.  To not play their best football yet still win convincingly shows you that if Newton can just continue to go out and execute their offense, New England can still hang with anyone.  Especially, if their defense continues to play as well as they’ve been. 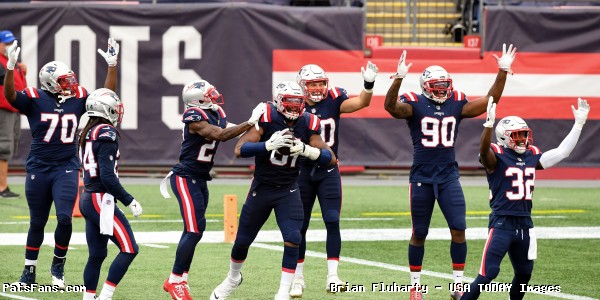 5) Speaking of which, the defense really did another solid job and through three games have been better than we could have hoped for.  They played well again Sunday against a pretty good Raiders team who had more than their fair share of opportunities to open this one up.

The interception early in this one by Newton, which came in their own territory, gave the Raiders an opportunity to capitalize on the turnover and take control of the game.

Instead, despite that field position, New England’s defense kept the damage to a minimum after doing just enough to hold Las Vegas to only a field goal.

They also came up big early in the third quarter when the Raiders came out to start the second half and marched down the field on a fairly methodical drive.  But after Las Vegas made it down to New England’s 22-yard line, the Patriots defense again came up with a stop and forced a 41-yard field goal attempt.

That kick sailed wide left and the Patriots took the football 69-yards the other way on 7 plays on the ensuing drive, which saw Burkhead run it in for his second touchdown of the afternoon.  It also gave the Patriots a 20-10 lead, putting pressure on a Raiders offense that struggled down the stretch.

But their biggest moment came late in the fourth after the Patriots went up 29-13.  On the first play from scrimmage, Carr and the offense started the drive from their own 6-yard line and New England’s defense took advantage.  They went after him on the first snap and exploded into the backfield, with Deatrich Wise and Shilique Calhoun greeting Carr in the end zone and dropping him for what seemed at first to be a safety.  Instead, replay showed that Carr lost the football as he was going down and Wise recovered, which was an unbelievable moment as they were all smiles after coming up with points on defense.

Given the personnel losses, they’ve really been surprising at this point and have really done a great job.  If this is any indication of what may be ahead for this group, it’s hard not to feel like they’ll be in the majority of games this season.

We’ll find out just how good they are next Sunday when they head out to Kansas City for a showdown against the Chiefs.

READ NEXT:
Patriots Week 3 Report Card For Big 36-20 Win Over the Raiders
Posted Under: 2020 Patriots Season