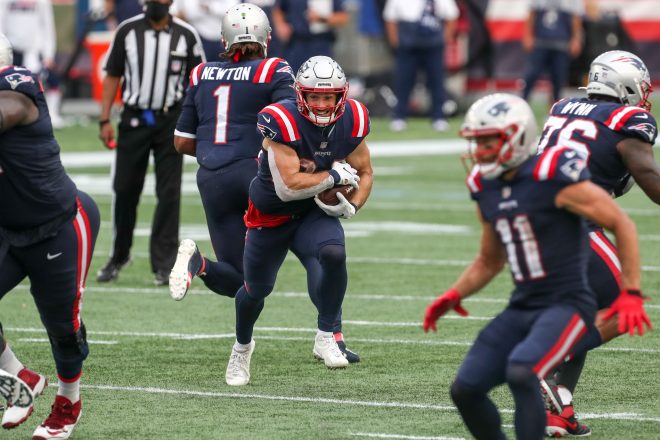 SOCIAL DISTANCING AT HOME — Bill Belichick once openly wondered what would have happened if Don Coryell had coached Ohio State in the 1960s and 1970s instead of Woody Hayes.

Hayes hated the pass attack.  His players said that Hayes would tell them “When you pass the ball, three things can happen, and two of them are bad!”  Coryell, on the other hand, made “Air Coryell” famous in San Diego and put Dan Fouts in the Hall of Fame.

But Coryell won zero Super Bowls while Hayes won five national championships in Columbus.  The key to football has changed little over the years.  Run the ball, stop the run.

With a quarterback named Tom Brady here for 20 years, you could afford to gloss over the rush attack.  With Brady now the helmsman down in Tampa, the Patriots now have Cam Newton at the steering wheel of the Patriot offense.  Josh McDaniels, who never should be allowed to become a head coach again because he is brilliant as offensive coordinator, has reinvented the Patriot offense to suit Newton’s skill set.

Along the way, McDaniels has also transformed the Patriot offense into a run-first offense.  Against the Las Vegas Raiders (the Las Vegas part will take some getting used to, just like the Los Angeles part in 1981) on Sunday afternoon at Gillette Stadium, the Patriots rode a massive rush attack to the tune of 250 team rushing yards and a 6.6 yards per carry average.  Rex Burkhead (you are lying if you say you had him on your fantasy team) scored three rushing touchdowns, and the Patriots turned a taut defensive struggle into a fairly easy 36-20 win.  The Patriots are now 2-1 and remain on the heels of the undefeated Buffalo Bills in the AFC East.

Both teams were dedicated to stopping one thing on the other team.  The Patriots took out tight end Darren Waller and he made only two catches the entire game for nine yards total.  The Raiders decided to take out the Patriot wideouts, and Julian Edelman and N’Keal Harry  had only two catches each.  But it was the Patriots that adjusted better, and made the plays needed to win the game.

Two stretches in the second half turned this game to the Patriots for good.  In the third quarter, the Patriots took over at their 31 after a missed 41-yard field goal by Daniel Carlson.  On second down, Sony Michel took off on a right tackle run, then cut back left (paying tribute to the late Hall of Famer Gale Sayers, who passed away this past week) for 38 yards.  Rex Burkhead then had 24 yards on three carries, the last five of which was a touchdown to put the Patriots up 20-10.

On the next drive after a Raider three-and-out, the Patriots took over at their 25.  On the third play, Michel took off on a left tackle run, and thanks to a great seal block by Joe Thuney (playing center today in place of the injured David Andrews), he rambled for 48 yards to the Vegas 13.  A Nick Folk field goal made it 23-13.  The run blocking for the Patriots picked up in the second half as the Raider defense began to tire a bit.

The Patriots put the game away in the fourth quarter.  After a Carlson field goal made it 23-13, the Patriots got the ball back at the 14.  Newton led the Patriots on an 86-yard drive in ten plays with Burkhead plowing in from two yards for his third rushing touchdown of the game.  The Raiders got the ball back at their own six thanks to a block in the back penalty, and on the first play, Dietrich Wise came in and sacked Carr in the end zone for a safety.  It was noticed later that Carr fumbled the ball before he hit the ground, Wise picked up the ball and ran it in for what now seemed like a touchdown.  After an interminable look under the hood, the safety was changed to a touchdown and a 36-13 lead.  The game was secure despite a late touchdown by the Raiders, and what was a close game for the first half turned into a Patriot blowout win.

Newton threw only one bad pass all afternoon, which turned into an interception by Johnathan Abram.  The Raiders got only a field goal out of it, and Newton was in control for the rest of the game.  He was sacked twice, but in the end did nothing to lose the game and seemed content to let the rushers have their day in the sun.  Newton did have three carries for 27 yards, but his teammates led the way and Newton continues to show terrific leadership qualities out there after three games.

Michel had 117 yards rushing on 9 carries for a 13-yard average.  Burkhead had 49 yards rushing for an 8.2-yard average, and also led the team with seven pass receptions for 49 yards.  Rookie J.J. Taylor continues to impress with 43 yards on 11 carries and a near four-yard average.  The 1978 Patriots might want to wonder if this bunch will threaten their rushing total, which for many years was the NFL record for rushing yards by a team in a season.

After the game, Michel mentioned that all the Patriot running backs dedicated the game to James White, who is still in Florida grieving the loss of his father, killed in a car accident last Sunday.  His mother remains in serious condition.  One can only wonder what will happen when White returns if they are this good without him, but all Patriot Nation continues to throw their support to the beloved White and that he comes back to the team only when he is good and ready.

Newton finished with 17 of 28 passing for 162 yards and a 73.8 passer rating.  With the wideouts taken out of the game, he relied a lot on screen passes and dump flat passes.  Burkhead was the benefactor here as previously stated.

Derek Carr finished 24 of 32 passing for 261 yards and two touchdowns.  He had no picks and a passer rating of 119.4.  People sometimes forget how really good Carr is; he used to throw to Green Bay’s Davante Adams in college at Fresno State, then almost led the Raiders to a deep playoff run in his third season before breaking his leg in the regular season finale.

Hunter Renfrow led the Raiders with six catches for 84 yards, and nine different Raider receivers caught at least one pass.  The Patriot rushing defense might still need some tweaking, as Josh Jacobs had 71 yards on 16 carries despite a sore hip.  The Raiders averaged 5.7 yards per carry as a team.

The Patriots travel to another tough road venue next week, and a date with the Super Bowl Champion Kansas City Chiefs.  Look for Patrick Mahomes to light up the Patriot defense much like Russell Wilson did last week.  Newton will need to keep his head and approach the game much the same way he did last week in Seattle.  Maybe this time he’ll get that one yard with no time left on the clock.

It was nice to see Belichick versus Jon Gruden opposing each other for the first time since the 2001 Snow Bowl/Tuck Rule game.  It was also nice to see the Woody Hayes approach to the offense (although it hurts this writer to say that given that he holds a master’s degree from Michigan), and that it was the rushing attack that won the game.  Old school football is fun to watch when it works.

READ NEXT:
For Bill Belichick, Sequence Late in the Game Was One of the Key Parts of the Win
Posted Under: Patriots News