2 years ago at 9:18 am ET
Follow @MarkMorse5
Posted Under: Patriots News 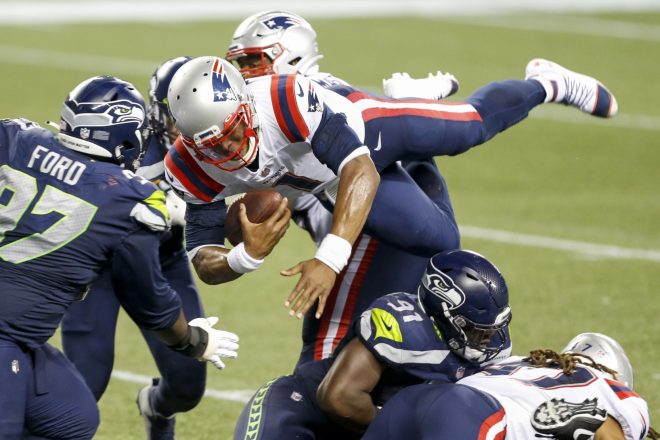 You’re pissed the Patriots lost this game.  I’m not, but disappointed? Yes, because despite getting shredded by MVP candidate Russell Wilson, they had a chance to win this game.

A series of unfortunate plays prevented the Patriots from winning.  Nick Folk missing a FG earlier in the game forced the Pats to go for a TD rather than a short game winning FG.  Julian Edelman had the most productive game of his career, but he let a crucial pass (probably a TD) go right through his hands.  The final, unsuccessful play, was more a great play by the Seahawks defense rather than poor execution by the Patriots offense.  That play was 6 for 6 prior to getting stopped.

The Seahawks guessed right and slanted their entire defense right.  When Shaq Mason pulled Seattle MLB Bobby Wagner fired right through the hole and slammed into Mason, delaying him from being the lead blocker.  Fullback Jakob Johnson blocked his man inside, into what should have been the hole.   Newton should have bounced this run outside and with his size would have had a chance for the TD.   I wished Josh McDaniel had held onto that fullback pass slipping out of the backfield for the end of the game.

Going into the game I stated the Pats needed to pass more on 1st down.  They didn’t and tried to establish the run.  They failed miserably, running 5 straight times on 1st down.  Seattle’s secondary is weak and have given up big yards two straight weeks (450 & 397 yards respectively).    Out of 23 1st down plays the Pats ran 11 times and passed 12.  Nine of those passes were in the 2nd half when they had to pass.

NE came out in nickel defense with Phillips playing LB.  This invited SEA to run the ball and Pete Carroll initially took the bait.  The Pats D gave up 154 yards on the ground for a 5.1 per carry average.  Eventually they let the magician Russell Wilson perform his magic and he was brilliant.  The TD passes to David Moore and DK Metcalf were things of beauty.  I still can’t believe Moore was able to keep his foot in.  Stephen Gilmore had a tough time with the physical DK Metcalf.  Metcalf took away the ball from Gilmore and pranced into the end zone.

Jeff Howe of the Athletic pointed out that Chase Winovich followed up a good Miami game by getting 4 QG hits and 4 QB Hurries.  However, I thought Winovich lost containment too many times and failed to set the edge.

The Swain TD on a crossing pattern, Howe pointed out that JC Jackson was the probable guilty party.  Adrian Phillips correctly called out Tyler Lockett being in the backfield and that should have triggered a change in coverage that everyone but Jackson got.  Howe stated that Jackson made a false step towards Lockett and that’s all it took for Swain to get a free path across the field.  Jackson got caught up in the wash and couldn’t get back to the receiver.

N’Keal Harry had 8 catches for 72 yards (9.0).  He is the new “Fall Down Fauria” of the Pats.  He got nothing after the catch.  Twice he was taken down with weak one armed tackles.   To his credit, he held onto a ball he had no right catching.  Diggs nailed him helmet to helmet and got tossed from the game for it.   If all he is going to do is catch the ball, then they should move him to TE.

Jamal Adams was all over the field.  Many times he was the spy on Newton.  However, when matched up against Julian Edelman, it was a complete mismatch.  Edelman was 6 for 6 when matched up with Adams.

Newton only called the TE number twice and Izzo came up with both catches for 19 yards.  I would like to see more of this in the future.

Greg Bedard of Boston Sports Journal pointed out the Pats D was atrocious and that Seattle attacked the weakness of the Patriots LB, especially J’Whaun Bentley.  He is too slow to cover any back out of the backfield.  Phillips didn’t look much better giving up that TD to Carson coming out of the backfield.

I didn’t expect the Patriots to beat the Seahawks.  I was surprised it was so close and that they had an opportunity to win.  There are no moral victories, but this game can only make me wonder what this team will be like when Newton gets more comfortable.