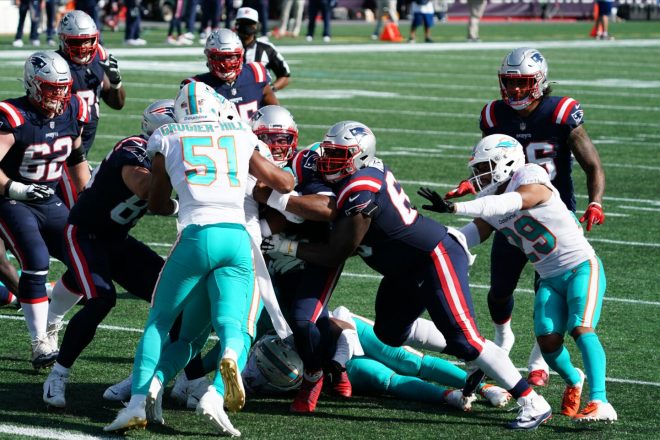 The Cam Newton era began with a Patriots victory in a close, hard-fought game that showed a much different looking offense than one that we had been used to seeing. The Patriots rode a grind-it-out running game and an opportunistic defense to down the Dolphins 21-11 in the opener for both teams.

Newton was in control of the offense from the onset of this one and looked more like the Newton pre-injury than the one that lost his last eight starts in Carolina. Newton completed 15 of 19 passes for 155 yards and ran the ball 15 times for 75 yards as the Patriots chewed up nearly 35 minutes of the clock.

“It was relatively picking up right where I remember the game to be,” said Newton, playing for the Patriots for the first time.  “I think it was just a feeling-through process as well with (offensive coordinator) Josh (McDaniels), coach Bill (Belichick), as well as (quarterbacks coach) Jedd (Fisch) to understand what they have. … We made the adjustments and we executed.”

The Patriots game plan was to run the ball, control the clock, and rely on a defense that was #1 a year ago. And it worked… they played well in all three phases of the game, and while there are plenty of areas to work on, it was a good way to start.

Defensively, we were worried about the run defense, and once again, it is only Week 1, and those concerns are far from erased but the Patriots defense looked pretty good up front against the run, limiting the Dolphins to just 87 yards on 27 carries (3.2-yard average), with the long run of just 12 yards.

Dolphins QB Ryan Fitzpatrick, who torched the Patriots in Week 17 here last year, was just 20-30 for 191 yards with 0 TDs and 3 INTs for a QB rating of 44.6.  Miami lost their best WR DeVante Parker in the third quarter with a hamstring injury.

Stephon Gilmore, Adrian Phillips, who had a strong game, and J.C. Jackson had the interceptions of Fitzpatrick who took responsibility for the offensive lack of scoring after the game.

The Patriots running game got production from six different players grinding out 217 yards on 42 carries. Newton led the way but they got 37 yards and a TD from Sony Michel, 32 yards from Rex Burkhead, 22 from James White, and in limited action, UDFA rookie J.J. Taylor showed why there was a buzz about him this spring/summer. He’s got the quickness, the low center of gravity, and the cuts to slash in the middle of the field.  He had 28 yards on four carries (7.0-yard average) and chipped in one catch for four yards.

Julian Edelman led the way with 5 catches for 57 yards, his first catch of the day was the 600th of his career. And N’Keal Harry had five catches on six targets as he and Newton started to find some chemistry as they hooked up four times on one drive. However, it was then that he didn’t secure the ball at the one-yard line, fumbling through the end zone and killing what was a stellar-looking drive that could have put the game away. 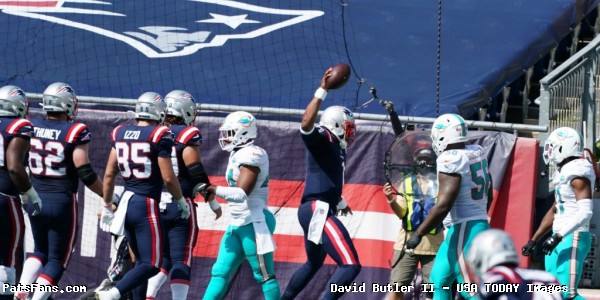 Newton had a solid outing in his first start for the Patriots on Sunday.

Newton made the majority of the right reads and decisions and he and Josh McDaniels are seemingly building a nice relationship. Newton commented after the game that their communication was “unbelievable”. While there are plenty of things to clean up, it was a very good start for the QB running an offense he’s really only had on the field for a month.

The young players were all getting involved early in the process. We mentioned Taylor, but rookie Kyle Dugger got some time on the field, and rookie linebacker Anfernee Jennings made a nice stop on the goal line. Devin Asiasi and Michael Onewnu got some blocking work along the offensive line.

Adrian Phillips had a really nice game, playing safety and sub-linebacker, moving all over the field, and looking like he’s been in Foxboro forever.

It was nice to see Derek Rivers and Ryan Izzo get involved a bit today, Rivers was primarily used as a pass rusher and chipped in with the only sack the Patriots had against Fitzpatrick. Izzo, used primarily as a blocker, slipped down the seam and hooked up with Newton for a 25-yard gain. It was the longest play of the day by either team.

The pass rush wasn’t very good today, expect them to tweak that a bit in the near future.

Everyone has been raving all summer about the energy that Newton has brought to the team. But it seems like, that he’s injected a lot of confidence as well, especially with his offensive linemen. You got the vibe all day long that they felt like they had this one under control.

Early in the second quarter, Newton converted a 3rd and 4 and then took it in the endzone when it looked like Elandon Roberts bit hard down low and Newton had plenty of room to the outside for an easy touchdown and a 7-0 lead. The Patriots missed a golden opportunity to open the game up. Gilmore picked off Fitzpatrick but Newton was sacked on third down which knocked them out of field goal range.

Fitzpatrick then got Miami going with a nice drive that began deep in their territory. He hit on big gainers to Preston Williams (20yards) and to Parker for 18 to get them in scoring range. Rivers got pressure on Fitzpatrick that forced him to overthrow his receiver on 3rd down. Miami kicked a field goal to make it 7-3.

The Patriots got the ball to begin the second half and they came out throwing. Newton and Edelman connected on the first two plays for 10 and 16 yards, then James White caught a pass for 11. That loosened up the defense a bit who had begun to crowd the line of scrimmage. Sony Michel rushed for five, Newton then hit Edelman for nine more. At the Miami 24-yard line, Newton rushed for six, and Michel for seven more putting them at the 11. Newton took it in from there making the score 14-3 and the offense was looking really good at that point.

Their next drive was another good looking one, where they moved right down the field, 78 yards before the Harry fumble at the one-yard line gave the Dolphins life. It resulted in a 15-point turnaround. Fitzpatrick then engineered a nice 11-play 80-yard drive that was capped off by Jordan Howard running it in from the one. Fitzpatrick ran in the two-point conversion to make it a field goal game at 14-11. 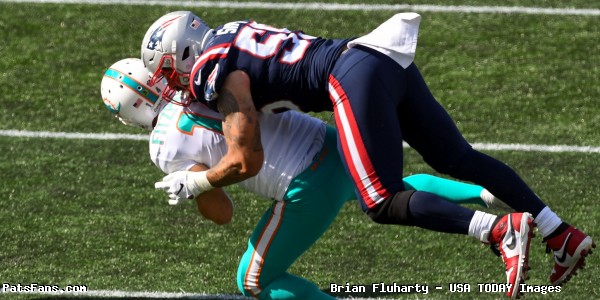 The Patriots defense did a good job against Ryan Fitzpatrick on Sunday.

But the Patriots quickly doused those hopes. On the first play from scrimmage, Edelman ran an end-around for 23 yards. Jerome Baker got flagged for a late hit out of bounds making it a 38-yard play. Nine plays later, the methodical drive had Michel powering in from the one to make it 21-11. Fitzpatrick would move them down the field but was picked off in the end zone by Jackson to ice the game away.

There is room for some optimism. McDaniels installed the new offense in just a few weeks and Newton, who Belichick has stated has been burning the midnight oil to learn it. He looked much more comfortable than we thought he would at this early stage.

The secondary looked as strong as we’ve come to expect, Joejuan Williams has seemed to find a role covering tight ends and looked good going against Mike Gesicki who gave them fits last December. The front seven has a long way to go, but they had a good start…that’s all you can ask.

“There’s room for improvement from all of us,” Belichick said. “I’m not saying it was the best-executed game in the history of football, but we did some good things today in all three phases of the game. We’re proud of that.”

We said we wouldn’t be falling into the trap of “Overreaction Monday” and we won’t. The WRs weren’t getting open nearly enough and the tight ends only had one reception. However, Newton has breathed life into the running game due to the defense having to account for him on every down. It is a facet for the offense that they haven’t had in a very long time. The backs out of the backfield were very good and Taylor looks even more intriguing now that we’ve seen some flashes in his first game action.  It is far from perfect but for Week 1 with no preseason? It was good enough.

We’re on to Seattle.