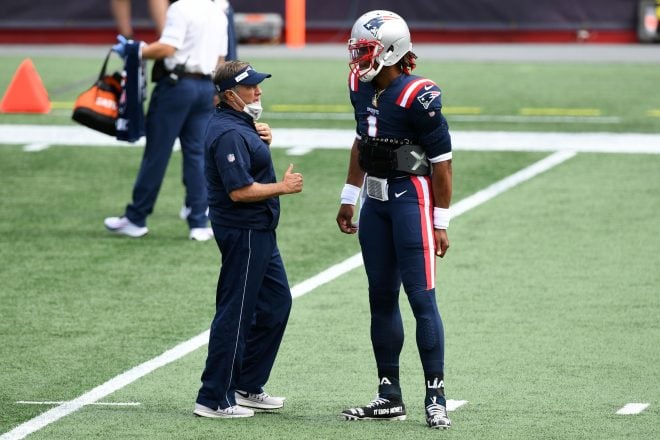 SOCIAL DISTANCING AT HOME — Cam Newton can rest easy, for the moment.

The new Patriot starting quarterback, who is trying to do what Steve Young, Aaron Rodgers and Jay Fiedler have done, took his first steps in taking over for the NFL GOAT quarterback.  With Tom Brady way down yonder in New Orleans preparing to take on a team with a quarterback almost as old as he himself, Newton took the helm of the Patriot offense and rushed for two touchdowns.  The Patriots avenged a Week 17 loss at home last year to the Miami Dolphins with a 21-11 victory at an empty Gillette Stadium on Sunday afternoon.  The win was not as close as the score indicated, as both the offense and defense dominated their sides of the ball.

Newton finished with 230 all-purpose yards, including 75 rushing yards on 15 carries and a 5-yard average.  But even more satisfying than these stats were his passing numbers.  He finished 15 of 19 passing for 155 yards and a 100.7 passer rating despite no passing touchdowns.  He ran a generally conservative offense that was run-oriented, but looked terrific in the passing game other than a few off-balance throws off his back foot.

This game signalled to the league that the Patriots have literally re-invented themselves on offense.  The Patriots amassed 217 team rushing yards and averaged 5.2 yards per carry.  Sony Michel had 37 yards and had the other rushing touchdown, Rex Burkhead had 32 yards, and even undrafted rookie J.J. Taylor had four carries for 28 yards.  Newton himself will make defenses stand up and take notice, and game planning for the Patriot offense will not be the same as in the last 20 or so years.

The only things which kept this game close were a fumble out of the end zone by N’Keal Harry, and zero points off of three Ryan Fitzpatrick interceptions.  In the third quarter, the Patriots used the run to maintain unreal ball control and shortening the game.  To open the quarter, the Patriots drove 75 yards in 8 plays, consuming 4:46 off the clock and ending with an 11-yard run by Newton for a touchdown on a right end run.  After a quick Miami three-and-out, the Patriots then drove 78 yards on 12 plays to the Miami 10-yard-line.  Newton then hit Harry in the right flat, and Harry headed for the right pylon.  Just before he went out of bounds, Jerome Baker stripped the ball away from Harry and the ball rolled out of the end zone for a touchback.  This play could have turned the game to Miami’s favor at the time, and Harry will no doubt get extra vigorous tutelage this week on ball security. 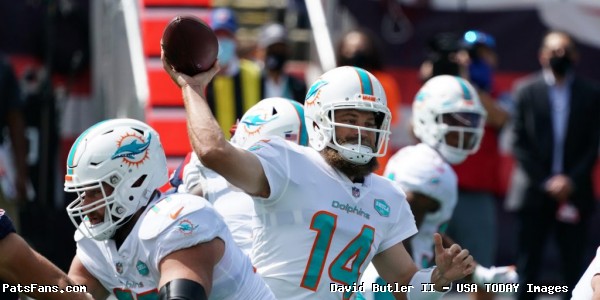 Fitzpatrick was picked off three times on Sunday.

Fitzpatrick was picked off three times, the first two times by Stephon Gilmore and Adrian Phillips, both picks coming in the second quarter.  But the first pick was followed by a three-and-out with Newton falling down for a sack on third down, and the second drive ended with a Nick Folk miss on a 46-yard field goal attempt at the end of the first half.

Still, the Patriots had control of this game throughout.  Some pass interference calls in the second half aided the Dolphins on their fourth quarter touchdown by Jordan Howard to make it 14-11 with just under a quarter to play.  But the Dolphins, especially with Davante Parker lost to an injury in the first half, could not solve the talented Patriot secondary and the good linebacker play.  Kyle Van Noy had five tackles, but he wore a white uniform and not a navy blue one.

Fitzpatrick, who attended the former football powerhouse known as Harvard, was 20 of 30 passing for 191 yards and three picks.  His rating was 44.6.  Despite leaving the game in the first half, Parker was the leading receiver with four catches for 47 yards.  The Dolphins rushed for only 87 yards as a team, averaging 3.2 yards per carry.

Harry and Julian Edelman each had five catches to lead the Patriots.  Edelman, who was nowhere near the “go-to guy” in this new offense, led the team with 57 yards and added 23 rushing yards on a jet sweep in the fourth quarter.  Overall, this offense was pretty much conservative without being “vanilla”, with Newton basically getting a feel for things and not making any bad or foolish throws.  On some plays, Newton did throw off his back foot, but there were no real mistakes other than getting sacked twice, one time after slipping.  Newton was charged with not losing the game, and he succeeded.

Next week the Patriots head for the great northwest to take on a Seattle team with a quarterback with a similar skill set as Newton.  Russell Wilson had 322 yards passing and four touchdowns as the Seahawks opened with a 38-25 win at Atlanta.  Stopping Wilson won’t be the same as stopping Fitzpatrick.  And you can bet that the Seattle defense will be ready and waiting for Newton.

To beat Seattle, the Patriots will need to mix up the run and pass more than they did today.  At some point, Newton will have to be more daring with his throws, Edelman will have to be his old self, and Harry cannot allow foolish fumbles.  The Patriots won’t have to deal with the infamous 12th man at CenturyLink Field, but winning in Seattle is never easy under any conditions.

Now, flip your TV channel to your Fox station, and enjoy the Saints game today.