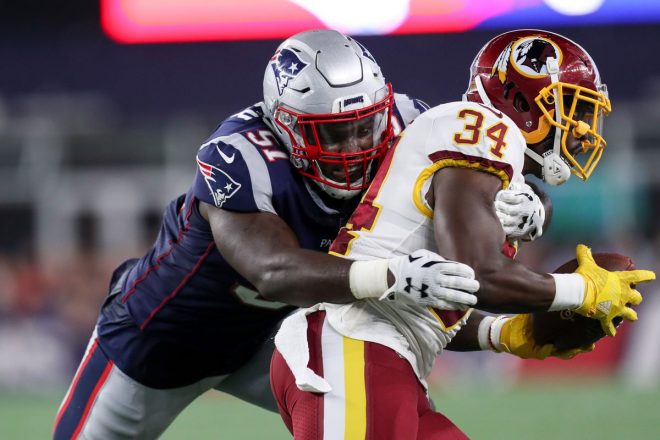 Finally…the pads are coming back on and we will actually have football stuff to discuss. And not a moment too soon.

Rookie Retires: The Patriots announced that rookie offensive lineman Dustin Woodard who was selected by the team during the 2020 NFL Draft has opted to retire from football. The team placed him on the reserve/retired list.

ESPN’s Mike Reiss confirmed that Woodard’s decision was not COVID-19 based, but on a loss of desire to continue to play football.

Tyler Gauthier Returns:  To address the loss of Woodard, and to backup center David Andrews, the Patriots signed Tyler Gauthier. He was with the team through training camp a year ago.

Patriots Salary Cap: Here is your Public Service Announcement (PSA) for the week/season. When it comes to the Patriots salary cap and trying to make sense of all of the nuances of it, there is Miguel (@PatsCap) and there is everyone else. Any questions about it are usually right on his timeline. And one of the great guys out there too.

4th & 2 Podcast – If you’ve haven’t checked out our PatsFans.com podcast, “Patriots 4th & 2” in a bit, please check it out. We (finally) recorded a video podcast this week with Mark Schofield (Scho Show, Pats Pulpit, Inside the Pylon etc.). Mark is a fantastic guest and we had a great conversation about the team moving forward, QBs, RBs, OL et. al.

“General Belichick?” Bill Had to Cringe at That One:

So, this week, President Donald Trump said on Thursday to radio show host Hugh Hewitt in an interview that he thinks the Patriots coach could succeed if he also brought his leadership skills to the battlefield.

“If I ever had a military battle, I’d call [Bill] Belichick up and say, ‘What do you think, what do you think? Give me a couple of ideas,” Trump said. “He’d be as good as any general out there.”

While the two have been friends for years, and the president while in NH in 2016 read a letter from “Coach Belichick” praising him for his “perseverance and toughness”, which sent shockwaves through much of the liberal-leaning local sports media, this was a first.

But calling Bill a “general”??? LOL

While Belichick no doubt would have been successful at whatever career path he chose and probably got a chuckle at the suggestion of the White House calling him for military advice, he would have rejected it for two reasons… #1 is that Bill is the master for ‘staying in his own lane’, how many times have we heard him say, “we don’t comment on situations that aren’t about our football team?”… or thereabouts.

But the kicker was the president calling Bill a general…ouch. Growing up in Annapolis, Bill is Navy through and through and said in the past he’d never bring a player from Army on board…So, it would have to be Admiral Belichick…well, maybe he’d make an exception for the Marines.

Not surprisingly, Belichick has said that the rookies this season are facing a very tough uphill battle in 2020. As we’ve pointed out already, due to the COVID-19 coronavirus pandemic, there were no rookie minicamps, no OTAs, no team minicamp and player-coach interaction has mainly been conducted via Zoom remotely.

Now, with no preseason games and limited padded practices, it is going to be hard to impress the coaches enough to supplant some of the veteran players. Belichick’s Friday press conference made that abundantly clear.

“They’re in deep water and turbulent water, and it’s going to get rougher, just in terms of the volume and the level of competition and becoming a professional athlete and the full day and consecutive days that get strung together with very high demands both physically and mentally and rest and recovery and all that,” Belichick said. But he praised them for the hard work the group has put in …with the usual caveat.

“I think all the guys are adjusting to it. They’re all working hard at it. It’s a really hard-working group. They haven’t been any problem. They’re just trying to do the best they can. But they’re swimming. They’re in deep water, and their eyes get opened every day as we move up in the process… But there is a long, long way to go.” (More to that below)

Belichick was asked about Cam Newton and his early impressions on how the former MVP with the Panthers is acclimating to the Patriots and the playbook. In a typical “Belichick-ian” answer, the coach kept his comments rather vague overall but did give his new QB some props about his work ethic.

“We’ve done a lot of meetings, a lot of walkthroughs,” he said. “A lot of information has been transferred to all the players, and he’s worked very hard, I’d say as all of our players have. We have a hard-working group. Those guys are ready to go. We’ve put in some long days, and they’ve been very attentive throughout the process.

“I’d say, certainly for all the quarterbacks at that position, those guys have been locked in, been focused, have worked extremely hard, all four of them. When they all get in the huddle, everybody has a lot of confidence in what they’re able to do and the information they have to give to the team — play-calling, adjustments, audibles, protection adjustments, things like that. That’s all gone pretty well. But again, we haven’t played at anywhere near the speed that we’re going to be playing at, so we’ll see how it comes together at that point.

“But Cam’s a hard-working kid. He really is.” If you were watching that live, raise your hand if you were expecting Bill to say, “No one works harder than Cam…”

Although things may not have begun that way this spring, the Patriots are in a full-blown youth movement. The Patriots began 2019 as the oldest team in the NFL and then got older as the season wore on. Now things are changing. With the losses of Tom Brady (43), Stephen Gostkowski (36), Jamie Collins (31 in October), Nate Ebner (31), as well as Kyle Van Noy and Elandon Roberts, they’ve now lost many of their older players, but also a ton of experience.

Factor into that the COVID-19 opt-outs of Dont’a Hightower (30), Marcus Cannon (32), Brandon Bolden (30), and Patrick Chung (33 this week) and the Patriots roster will now be significantly younger and less experienced entering the season.

One of the areas that Bill Belichick the GM has always excelled in, and for those dolts who always criticize Belichick the GM pay attention, is this: He, along with Nick Caserio have been outstanding at blending a great mixture of youth and experience in the roster. There is a fine, fine line at having a veteran roster that can compete for championships every year and having an old, lethargic group who tunes out their coach, and a young, inexperienced team that makes far too many ‘rookie’ mistakes.

And a look at what Belichick has done since 2001 is amazing at keeping the team relevant. Since missing the playoffs in 2002 with a team he was still trying to mold, the only time they’ve missed the postseason was in 2008 and that team went 11-5.

But 2020 is a different animal and due to inevitable changes due to the salary cap and unforeseen ones due to this crazy pandemic, youth will be served this year. Losing such veterans as Van Noy, Collins, Roberts, Hightower, Chung, Cannon, as well as special teams stalwarts Bolden and Ebner mean that young players are going to be thrust much more in the spotlight than in years past.

Where we are used to seeing many rookies get kind of a ‘red-shirt’ type of season will now be up for grabs. Rookies such as Kyle Dugger, Josh Uche, and Anfernee Jennings will probably be looked to as contributors much more so in 2020 than they may have in years past. With depth at offensive line an issue, Yodny Cajuste who didn’t play or practice a snap in his rookie season may be in the mix to become the starting right tackle.

Even if Cam Newton wins the starting QB job, he’ll be 12 years younger than Brady will be in Tampa next month. Ja’Whaun Bentley, the third-year linebacker at just 24 is the most experienced linebacker in the Patriots system this year. He’ll be expected to provide the leadership to call the plays in the huddle, something Hightower has done.

Playing the balancing game between youth and inexperience and veterans and an aging roster is something Belichick has been outstanding at. But this year, due to circumstances beyond his or anyone else’s control, his hand may be forced, just a bit, to rely more on younger players than he’s accustomed to or even planned on. Just look at the linebacker position as a prime example of that. This isn’t the only time it has happened. In 2013, the Patriots got really younger and had just 11 players at the start of the season over the age of 30.

Belichick’s mantra has always been, “we’re going to do what’s best for the football team.” That isn’t just a catchphrase but a philosophy that they’ve stuck to. This year, that may just end up being best served by tossing many of the younger players in the deep end of the pool and seeing how well they can swim.

It is time to put the pads on and for training camp to really begin in earnest… “Let’s Go!”

“We’re still a long way from anything close to real football, but we’re doing more now than we were before,” he said. “Each day is an acclimation day, an adjustment day for them, and I think they’re just trying to keep their head above water and try to swim or paddle in the right direction knowing that they’re not able to keep up, but they’re doing the best they can, and they’re way ahead of where they were a week ago, two weeks ago, a month ago, two months ago. A lot of progress there, but a long, long way to go. They’re really all in the same boat. It’s a hard-working, conscientious, diligent group that just … they have a lot that they have to absorb. We’re gonna get a much better evaluation of where they are in the next week or 10 days when things start happening on the football field and we start playing some football.”

Bill Belichick on the hard work that the Patriots rookie class is exhibiting in the early going of a very different training camp this summer.

And happy birthday in Valhalla to the “red-headed stranger.”

Bill “Patton” Belichick: “The object of war is not to die for your country, but to make the other bastard die for his”. Who doesn’t think that this would not be his philosophy?

By: Robert Alvarez
Patriots Chairman and CEO Robert Kraft is honored by two organizations for his charitable and humanitarian work.
32 mins ago