Defense is the hallmark of Bill Belichick led teams and this year’s team will likely win or lose based upon how well the Defense plays.

The Patriots have a brutal schedule, the number 1 toughest schedule.  A far cry from the cream-puff schedule they had over the 1st half of last year.  Defensively they dominated (as they should have).  You can’t blame them, they played the schedule and opponents that were before them.  However in the second half it was a different story and they were exposed.

This season they play five of the top six rushing QB’s.  That doesn’t include Allen who they play twice and the possibility they may face Tua Tagovailoa once or twice.  What have the Patriots done to protect themselves against these running threats and high powered offenses?

Let’s start with the type of defense the Patriots play.  They play a hybrid defense that is based upon their excellent secondary play.  They play primarily a Cover 1 with a single high safety.  Occasionally, they will play the dangerous Cover zero with no safety.  The idea was to put pressure on the QB and force a throw by an inexperienced QB under pressure.  It worked well in the 1st half of last year.  By playing the Cover 1 they take away the middle of the field, and force the longer, tougher throws to the sidelines.

Up front they are a hybrid of 4-3 and 3-4 defenses.  The players they have and those drafted have flexibility in and out of those defenses without having to change personnel.  Let’s dive into the three areas of the Defense.

Secondary – There isn’t a better secondary top to bottom than the Patriots in the entire NFL.  Year in and year out the Patriots secondary players are either traded at the cut-down date or picked up by other teams because they are just that good.  That starts with Defensive Player of the Year, Stephon Gilmore.  He is a shutdown corner, enough said.  JC Jackson, an undrafted free agent, became a legitimate threat in the secondary.  When other teams are throwing away from Gilmore they are getting Jackson in their face.  In the slot there is none better than Jon Jones.  Jason McCourty is a valuable backup that would be a starter on most teams.  Last year’s second-round selection, Joejuan Williams, is a lanky 6’3” corner with good coverage skills, especially against those big WR’s.  Williams is reported to be playing some safety this year too.  Justin Bethel is listed as a CB but he is the other ace Special Teams gunner.  Myles Bryant, a smallish CB from Washington, was signed as a UDFA and will look to make an impression for a PS spot.

Devin McCourty is the high safety.  McCourty was drafted and played as a CB, then was converted to Safety.  He will be 32 this year.  A fact not overlooked in the draft when the Patriots made DII Safety Kyle Dugger their 1st pick at #37.  Dugger is a freak athlete with terrific Punt Return skills.  The Patriots traded away Duron Harmon and I see Dugger getting some of his reps.  Patrick Chung just received a surprise contract extension. He and the McCourty twins are 32.  Chung will actually be 33.  He may potentially be suspended by the league for the drug charges last season. Chung is best as a in the box safety / LB hybrid.  Dugger is projected as the same type of player, with even more physical gifts.

The Patriots had the oldest Defense (29.5 years of age) in the league.  They signed UFA Adrian Phillips from the Chargers and still have Terrance Brooks who is going into his 7th year at age 28.  Brooks played some at Safety last year but was relatively ineffective.  Brooks is a core Special Teams player that could be easily be replaced by Phillips.  Last year UDFA Malik Grant made an impression before getting hurt and put on IR for the year.  Cody Davis was signed as a UFA and is another player that plays all four Special Teams.  Don’t overlook the possibility of Joejuan Williams playing some safety too.

They are stacked in the secondary and this will allow them to remain in games while younger players at other positions on defense and offense learn how to play in the NFL. 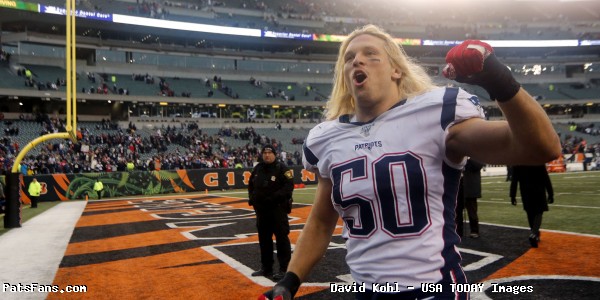 Winovich should be even better in 2020.

Linebacker / Edge –  This is a hybrid position that Willie McGinest made famous.  The Elephant.  Maybe he is a DE maybe a Linebacker.  John Simon and rookie Anfernee Jennings look to be starters at this position on either edge.  Second-year player Chase Winovich is expected to be even better in his 2nd year.  Rookie draft pick Josh Uche should get time at both the edge on passing downs and at Inside LB in a rotation with Ja’Whuan Bentley who is strictly a 2 down LB.  The Patriots lost Kyle Van Noy and Jamie Collins to Free Agency, but spent a 2nd and 3rd rd picks on Uche and Jennings to replace the Free Agents, who the Patriots didn’t have the cap space to re-sign.  Dont’a Hightower is the rock of the LB corp and is coming off his best season.  Patriots also lost back up MLB Elandon Roberts, but they have signed UDFA De’Jon Harris ($140K guaranteed) and Kyhava Tezino.   Brandon King is listed as a LB but is known more as a core Special Teams player.  Draft Choice Cassh Maluia may put King’s position at risk.  Maluia ran a 4.53 40 at the Wyoming Pro Day.  This for a MLB.  It may take some time for this unit to gel especially since they are not getting any reps in what would have been OTA’s going on this week.

Interior Line –   This was the Achilles heel of the defense last season.  They were in the lower half in defending the run.  This offseason they haven’t done much to improve themselves.  Danny Shelton was not resigned.  In his place they signed Beau Allen from Tampa Bay, another big body player at DT.  Lawrence Guy returns as their best interior lineman.  Adam Butler and 2019 5th rd selection UDFA Byron Cowart return, but neither have the girth to make an impact.  Dietrich Wise is in danger of losing his roster spot.  A couple of UDFAs are interesting.  Nick Coe, at 6’5 291 lbs, was projected a year ago to possibly break into the 1st round.  He fell all the way to being undrafted.  The player I am most interested in is Bill Murray.  He is a little light for a NT (280).  He is strong (30 reps at 225) and very fast, running a sub 5 forty.  He is relentless but played at FBS level competition.   His most outstanding stat is that he blocked 10 kicks in his college career.  The film I have seen of him reminds me of Joe Klecko of the Jets.  He has narrow shoulders and wears undersized shoulder pads and tight fitting shirt.

So this defense must keep the Patriots in games.  I think the offense will rely on the run game and try not to put Jarrett Stidham in 3rd and long situations.  Control the ball and clock, keep the defense off the field and/or give them plenty of rest.  This is the tried and true game plan of Bill Parcells (Giants) and Bill Belichick (early success when Tom Brady took over when Drew Bledsoe got hurt and Matt Cassel when Brady went down). Hopefully, it will lead to similar success in 2020.

Nice article. BB is retooling this D but it may take 2 years. Tough schedule. Buckle your chinstrap!