2 years ago at 5:30 am ET
Follow @MarkMorse5
Posted Under: Patriots News 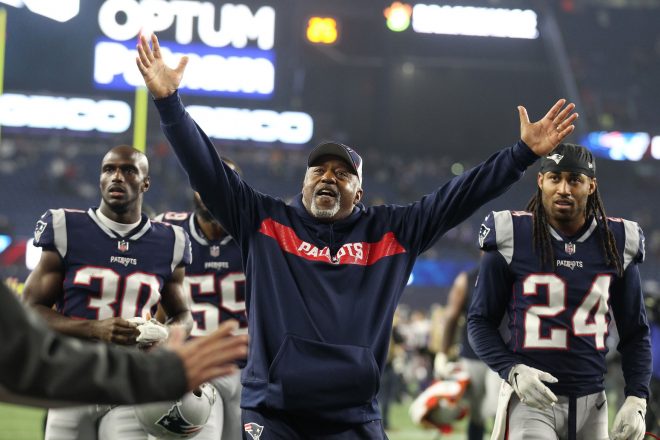 With Joe Judge taking the New York Giants Head Coach position, he poached few coaches from the Patriots and Dolphins.  Bret Bielma (DL Patriots) and Patrick Graham (DC former Pats and Dolphins coach).  Dante Scarnecchia retired.  So there are a few holes in the coaching staff.  Here is what I know about the staff as of today:

RB – Ivan Fears – Fears is the dean the assistant coaches, now in his 27th year.

WR – Mick Lombardi – He moves on from QB coach.  Lombardi is the son of Mike Lombardi, the former confidant of Bill Belichick.  Troy Brown is not listed as an official coach, but he is at all the practices and can be seen on the sideline during games.

TE – Nick Caley – Caley will have his work cut out for him this year with two and possibly three new TE’s.

QB – Jedd Fisch – The former LA Rams OC has joined the Patriots.  He has quite the history, which I will get into later.

OC – Josh McDaniels – I would think he either ascends to head coach next year or this will be his last with the team.

DL – TBD – I am thinking that DeMarcus Covington (OLB Coach) might be moved here.  I think James Develin will also have a role on the Patriots coaching staff too.  DL might be a nice place to start.  Develin played DT at Brown.

LB – Jerod Mayo – He has turned out to be a great assistant coach.  The players can really relate to him.  The story is that Mayo was able to teach Draft Pick Josh Uche the LB position for the Patriots in two days.

CB – Mike Pelligrino – This will be his 5th year with the team starting as an Intern, moving on to Coaching Assistant and now for the 1st time a position coach.  Pelegrino graduated from Johns Hopkins and was a two time All American Lacrosse player.  He even played for the Boston Cannons while coaching for the Patriots.

S – Stephen Belichick – This will be his 8th season.  He appeared to be calling the defensive signals last season.  Don’t be surprised if he is named DC.

ST – Cam Achord – Anchord will take over for Judge.  He practically ran the ST last year as Judge also had WR responsibility.  Former Alabama Safety, Vinnie Sunseri was signed to help with ST.

Coaching Asst – Brian Belichick – His exact role is unknown, but this is his 4th season

Special Asst to Head Coach – Eliot Wolf – He takes over the position that Mike Lombardi had.  Wolf was the former Asst GM for Cleveland and was ousted when new GM Berry came to CLE.  Wolf worked for SEA prior to the draft attending the combine.

Ernie Adams – Special Assistant – He is not listed on the coaching staff but has an office in the building.

– The Rams are reportedly upset with the League in the way the schedule played out for their home game with the Patriots.  The Rams are coming off a road game to play the Patriots on Thursday.  The Patriots are playing the LA Chargers in LA and staying on the west coast to play the Rams in the same stadium.  That is the only break the Patriots got with the #1 toughest schedule in the league.  I say to the Rams, shut your trap, prepare for the game and play 4 quarters.

– What a coincidence the Patriots and Tampa Bay Bucs only play at the same time twice all year.  These are both Eastern Time Zone teams, which means each club should have had more games at the same time.  The Patriots have 5 prime time games, several 4:30 games.  So what if the league wanted them playing at different times.  More power to them.

– Joe Tessitore and Booger McFarland are out for ESPN’s Monday Night Football.  Both will be retained by ESPN.  I liked both announcers and though they did a good job.  I will be following this to see who replaces them.  During the season, I will be reporting on the media and their delivery to the public.

– Do you remember the Commissioner, Roger Goodell, putting out a challenge and prize of watching a Monday Night Football game with him in his mancave?  The money raised as part of the Draft – A –Thon to raise money that would go to COVID-19 relief?  Well … the auction got a high bid of $250K.  Fantastic for COVID19 relief.  However, this just backfired on Goodell.  The winner was none other than the biggest critic of Goodell, David Portnoy of Barstool Sports.  Would love to be a fly on the wall for that game!  Hope Goodell follows through with hosting this.

– In an article written by Jeff Howe of the Athletic, he points out that Jedd Fisch was the WR coach at Michigan when Devin Asiasi was a freshman recruit.  The next season, Fisch took the OC position at UCLA under Jim Mora.  Asiasi transferred to UCLA.  Fisch moved on to LA Rams when Chip Kelly came on board at UCLA.  Supposedly, Belichick called Kelly while he was on the clock for the Asiasi trade and selection.  Think they had some inside information on Asiasi.  The article goes on and tells of Asiasi ‘s high character despite getting a three game suspension for breaking team rules.  Chip Kelly said Asiasi owned the incident and it made him a better person.  Coach Jim Mora said “He is a great pick for that place”.

– Justin Rohrwasser claimed in a pre-draft television interview that he was 14 for 14 in clutch situations.  He lied.  You would think he would know that.  He was only 4 of 6 in 4th quarter kicks and only one of those was in the last 2 minutes.  There were seconds left on the clock and was iced twice, when he made the 53 yard kick, in bad weather.  It was the homecoming game against Western Kentucky for the win.  What else has he lied about?

– Congrats to Richard Seymour for his selection to the Patriots Hall of Fame.  I am glad that Seymour was selected now, before he is actually elected to the Pro Football Hall of Fame.  He has been a finalist the last two years and I think he will get elected next year.  In his 12-year career, he was selected to the Pro Bowl 5 times while collecting three championship rings.   He is the 7th player to be selected into the Patriots Hall of Fame with 3 rings.