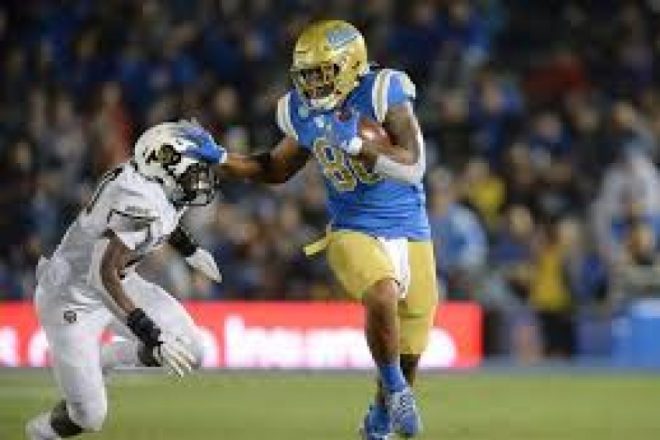 We’ve taken a look at a couple of linebackers, a safety, the defensive line and one tight end that may help out the team. Today we’ll look at another tight end. It is a position we feel that they could add two players easily.

To recap again, the Patriots since 2010 had made the tight end position a huge part of their offense and that was because Rob Gronkowski was such a weapon in both the running and passing games for the decade. He could attack the defense on all three levels and he opened up things for the wide receivers with the amount of the field that he would draw attention from. His retirement last year left a gaping hole in the offense that was never filled.

As of today, the Patriots have Matt LaCosse, Ryan Izzo and fullback/H-back James Devlin, Dan Vitale, and Jakob Johnson. There isn’t anyone who can stretch the seams and not a reliable red-zone threat. They need probably two tight ends in this upcoming draft.

So, let’s take a look at another one of the prospects that we feel would be a good fit for the Patriots. Devin Asiasi from UCLA is a very intriguing prospect who is just beginning to tap into his potential. He was a four-star recruit from California. He spent one year in Michigan and then sat out a year when transferring home to California.

Devin Asiasi from UCLA is another emerging prospect at tight end. He made only six catches for the Bruins in 2018 but quickly became a favored target with the offense in 2019 catching 44 passes for 641 yards and four touchdowns.

Asiasi is a powerfully built, very athletic tight end who moves quite well for a big man. A look at his highlight tape and you can see him hurdle a would-be tackler or just run right by them. He can attack all three areas of the field and is a matchup chess piece when attacking the deep seams of the defense.

While he’s still a little raw in his route-running, and his blocking technique, these are easily cleaned up with coaching. His fluctuating weight may be an issue. But he’s a naturally powerful blocker and has the soft hands to become a key cog in the offense.

– Good burst off the line

– Can attack the seams, averaged over 15 yards per catch

– Outstanding after the catch

-Weight fluctuation is an issue

– Needs to use his body better, shielding the ball from opponents

Asiasi will immediately challenge for the starting reps as the blocking tight end who can catch the ball.

Yes, in Year 2 he could easily be the starting “Y” tight end and providing solid in-line blocking and gaining more and more looks in the passing game.

He would push Ryan Izzo for a roster spot this summer. They may opt to keep three tight ends, but his value should be felt immediately.

NFL.com’s Lance Zierlein compares Asiasi to Captain Crump, Alge Crumpler.and wrote this, “His athleticism and speed really stand out in space. He’s a threat in the seam and with deep corners and over routes in a play-action based attack. Once he learns to attack throws and body defenders with his frame, he will offer value as a possession target on third downs. Asiasi’s areas of improvement are attainable and he projects as a play-making Y with future TE1 potential.”

Asiasi is built like an edge rusher and could be an outstanding blocking force in the NFL with some technique cleanup. He is a big man who already can use his body to shield from defenders, and is an area he should improve on as well. He is outstanding after the catch as evidenced by his career 15.2 yards per reception average. Everything about him is about potential.

Asiasi is a guy who could come in and produce from Day 1. But although he is good now, how far he develops is strictly on him. If he fully commits to an NFL program, the potential for him is quite high. He’s one of the few tight ends in this class that can be productive in both the running and passing games. If he’s around at the end of Round 3-4, he would be a very valuable pickup for the Patriots.