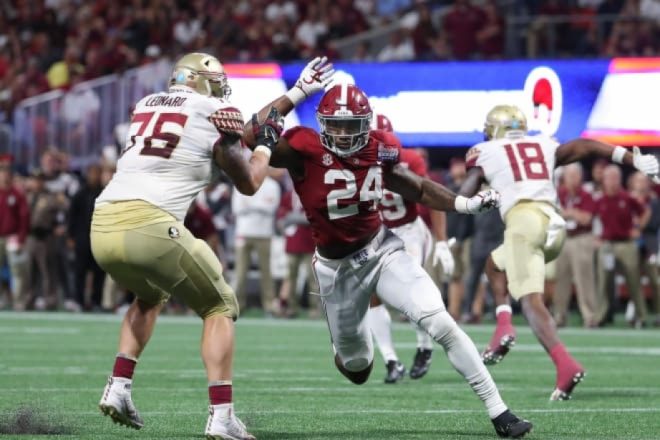 In my Sunday post, I touched upon the need at the linebacker position. The team lost an awful lot of talent of depth with Kyle Van Noy, Jamie Collins, Elandon Roberts all gone this spring. Not only were those players talented but they were versatile too. Van Noy and Collins, in particular, were like movable chess pieces who Bill Belichick could move around and create mismatches. That’s why the sack numbers were so high, especially early in the season when Collins was en fuego.

At the linebacker position, the team currently has Dont’a Hightower, Ja’Whaun Bentley and Terez Hall. The team also has hybrid edge rushers who can also play some linebacker with Chase Winovich, John Simon, Brandon Copeland, Derek Rivers, and Shilique Calhoun.

As I wrote for the Sunday column, a lot of people are enamored (and rightfully so) with players Patrick Queen, Zack Baun and a few others who are tremendously talented but are not the size the Patriots usually covet. The average size of a linebacker that the Patriots draft is over 6’2 and 245 lbs. So, while I’m not going to sit here and tell you that it isn’t going to happen for either of those guys but I’m not holding my breath.

We’ll take a look at a few of the prospects that we feel would be a good fit for the Patriots and vice versa.

Terrell Lewis from Alabama is an intriguing prospect that played in the SEC for Belichick’s good friend Nick Saban in Tuscaloosa. When talking about Lewis, however, his injury history is bound to be a concern. He missed significant time as a sophomore with an arm injury and then all of his junior season with a knee injury. But healthy in 2019, he showed the potential that he possesses. He led Alabama with 16 QB pressures while notching six sacks and 11.5 tackles for loss.

He is built like a prototypical linebacker, with a long frame, very well built and excellent footwork. He runs well for a big man at 6’5, 262. He has the versatility to either rush the QB off the edge or drop into coverage.

– Outstanding explosion off the snap

– Rare combination of speed and power

– Potential is far ahead of him

– Needs to get a little stronger in setting the edge

– Could use better use of his hands

Lewis will start out as a depth player, perhaps as a sub-package rusher, but by the end of his rookie season, he should be getting more and more reps

Yes, in Year 2 he should not only be earning starting reps, but could see his role blossom into one of the leaders of the defense.

Lewis is won’t be replacing anyone currently on the roster but could see his role evolve into a similar way the Patriots used Jamie Collins. .

Limited, but the team will probably use him on some of the coverage units taking advantage of his speed and athleticism

NFL.com’s Lance Zierlein in his draft profile wrote that Lewis, played in just 26 games, so he’s less technically sound than most Alabama defenders at this stage, but he was still productive and showed growth as a player in-season. With more coaching and development as a rusher, he should be able to pair traits with the skill to become a future NFL starter

Lewis’s future is tied up in potential. He is not yet the sum of his parts after playing in just 26 games in college. That combination of speed, power, and instinctive play should be an enticing look for the Patriots to take a flyer on. He is probably (if he can stay healthy) going to be a much better pro than he was as college player.

With the Patriots possibly trading down into the second round, Lewis should be around for them in the late 30s or early 40s.  The Patriots like their outside linebackers big, physical, and with the ability to either set the edge or drop their hand in the dirt and rush the passer. Lewis checks all of those blocks.

Lewis’ highlight reel tape from JustBombs can be seen here:

Listen to our Patriots 4th and 2 podcasts on Spreaker as the writers Russ Goldman, Derek Havens and I from PatsFans.com discuss the latest Patriots news and game analysis.