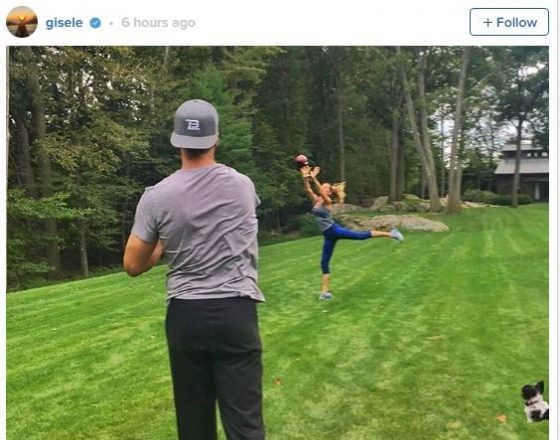 February 26 marks the eleventh wedding anniversary for Tom Brady and Gisele Bündchen. The lovebirds married on this date in 2009 in Santa Monica. Certainly a wise choice over Tara Reid.

February 26, 1990
General Manager Chuck Sullivan fired Raymond Berry over ‘philosophical differences’. The previous season the Patriots went 5-11 with Berry serving as his own offensive coordinator. His assistant defensive coaches shared the duties of defensive coordinator, while Sullivan wanted Berry to name an OC and DC. Berry commented that ‘when he doesn’t agree with my decision, his job is to fire me’. He had a humorous response to a reporter’s question about what the philosophical differences that Sullivan alluded to. Berry’s response was ‘I never heard any talk among us about any problems with philosophy’.

At the time Berry was the winningest coach in franchise history, leading New England to a 51-41 record over five seasons. He coached the Patriots to their first post-merger title game after the Pats became the first team in NFL history to reach the Super Bowl by winning three playoff games on the road.

Everything went quickly downhill after that. An exposé on rampant drug use by the players immediately followed the humiliating blowout loss to the Bears. In 1986 the Pats were one and done, then missed the playoffs in each of the next three seasons. A drop in attendance had to have been a major factor in the decision, even if Sullivan never mentioned that fact.

Berry made a couple of interesting final comments. He stated that the Patriots were ‘a football team that’s in need of some new talent and some physical healing. Then the team could contend.’ But if those two needs were not met, ‘it’s not reasonable to expect them automatically to be contenders.’

The team failed to achieve either of those two requirements, resulting in four consecutive seasons with double-digit losses.

The Pride of Marshfield

Boston College would not offer offer the south shore native a scholarship, leading to a giant chip on his shoulder that led to an 11-year pro football career. At Brown he set five Ivy League records, for career and single season receiving yards and receiving touchdowns, and career all-purpose yards. In 1999 the Patriots received a compensatory draft pick due to the loss of free agents Keith Byars and Sam Gash, and used that to select Morey.

Sean began 1999 on the practice squad, before being promoted to the active roster for the final four games. In February the Pats allocated Morey to NFL Europe with the Barcelona Dragons. Morey was waived at the end of the 2000 training camp and later that season rejoined the Patriots practice squad. The Patriots waived him one final time at the end of the 2001 training camp.

Morey overcame his lack of success with his hometown team and became a Pro Bowl special teamer, playing until age 33 in 2009. He played in 112 regular season games and 17 postseason games, winning a Super Bowl with the Steelers. Considering how Bill Belichick values special teams play more than any other NFL coach it is surprising that the one place things did not work out for Morey was in New England.

Rick Lyle was initially signed as an undrafted rookie from Missouri by Bill Belichick and the Cleveland Browns in 1994. Lyle played for Belichick again when BB was the defensive coordinator of the Jets, and then a third time when The Hoodie became head coach in New England. Lyle played in 21 games with three starts while with the Pats. He retired at the age of 33 after winning Super Bowl 38 as a member of the Pats. Since then he has worked as an assistant high school football coach and an assistant strength and conditioning coach for the Jets and Browns.

Justin Green spent most of 2013 on the practice squad, seeing action in two games. During the 2014 preseason the Patriots traded Green to Dallas for defensive tackle Ben Bass. Green re-signed with the Pats late in 2014 and was on the practice squad when the Patriots defeated Seattle in Super Bowl 49. He remained with New England throughout the 2015 offseason prior to being waived by the Pats one final time at the start of the 2015 training camp. Green finished his pro football career in the Canadian Football League in 2016.

Kennard Backman had two short stints on the Pats practice squad but was never promoted to the 53-man roster. Originally a 2015 sixth round draft pick from UAB by Green Bay, he also spent time with Detroit. Backman appeared in eight NFL games, all for the Packers in 2015. He is the founder and executive director of Innovation Pros in Atlanta.

Other 2/26 birth dates with a New England connection

Bill Cooke, 69 (1951)
Born in Lowell; Worcester Academy; UConn and UMass-Amherst
Drafted by the Packers in 1975, the defensive tackle spent six seasons in the NFL.

John Nolan (1926-1996)
Holy Cross
Nolan was the 14th overall pick of the 1948 NFL Draft, by the Boston Yanks. The tackle never missed a single game in his three seasons of pro football.