2 years ago at 6:00 am ET
Follow @AllThingsPats
Posted Under: Patriots Commentary

On February 12, 1969 the Boston Patriots held a press conference to announce the hiring of George Sauer as their new general manager. Sauer had worked with new head coach Clive Rush with the New York Jets as the director of player personnel. Both were viewed by Billy Sullivan as winners who would lead the Pats to glory, duplicating the results they experienced with the Jets defeating Baltimore in Super Bowl III.

Nobody would remember Sauer, but the press conference would proceed to become an unforgettable moment in the history of the Patriots franchise. It was also an omen of the Clive Rush era – or error.

Rush walked up to the podium and put his hand on the microphone – and immediately began screaming in anguish. Electricity from the live mike went up one arm, across his shoulders and down the other arm. The current temporarily paralyzed his muscles. As a result he was unable to let go, and the voltage continued to flow through his body. Rush staggered to the corner, still unable to make his hand release the microphone from his grap. Patriot board member Dan Marr jumped up and began ripping every wire he could get his hands on out of the sockets they were plugged into. That caused the current to finally stop flowing through Rush’s body, saving his life.

February 12, 2020:
The New England Patriots reportedly extend the contract of Nick Caserio. The Director of Player Personnel had been at the center of rumors for the past year in regards to taking a similar position with the Houston Texans. His contract with the Pats expires immediately after the 2020 draft.

A receiver that never actually played a single game for the Pats headlines the February 12 birthdays.

Bill Belichick is not the only head coach to ever make it a point of adding opposing players who he has witnessed perform well against his team. Sometimes it works out well, as in examples like Wes Welker, Mike Vrabel or Darrelle Revis. Other times it doesn’t pan out; Greg Lewis falls into the latter category. 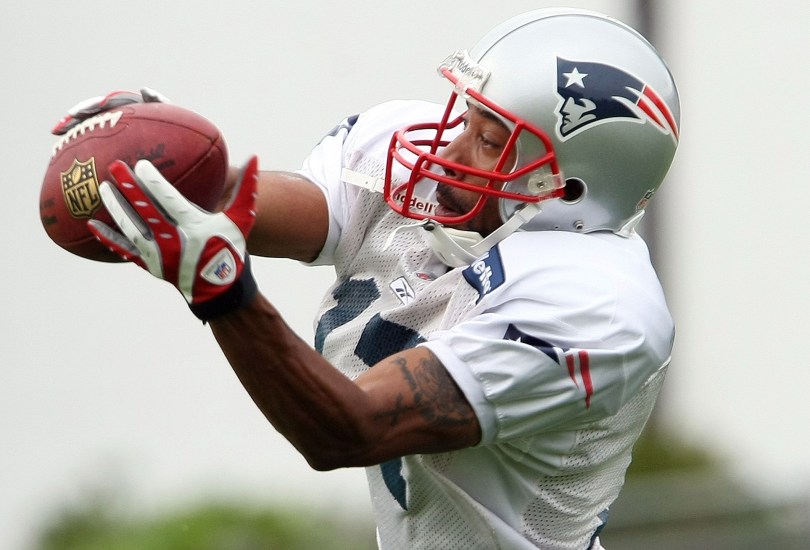 Bill Belichick found a way to stop receiver Greg Lewis from tormenting his New England Patriots — trade for him.

“Greg has always killed us,” Belichick said recently. “Every time we’ve played him, he’s killed us. We haven’t been able to cover him very well so that kind of catches your attention.”

Greg Lewis initially made the 2009 roster in New England but was released two days later on September 7, 2009. With the benefit of hindsight he was a poor fit. Lewis was primarily a lot receiver on a team that had Wes Welker, with Julian Edelman his understudy. Since retiring from the NFL Lewis has been a receivers coach with the Eagles and Chiefs.

Dion Lambert played in thirty games with four starts over two seasons for the Patriots. During that time he had one interception, one forced fumble, a fumble recovery and one sack. Lambert has most recently worked as an assistant high school football coach in Los Angeles. On April 27, 2003 the Pats traded down ten slots in the fifth round with the Titans, picking up an additional sixth round pick. The Patriots used those three draft picks on Dan Koppen, Kliff Kingsbury and Ethan Kelley. Kelley spent 2003 on the practice squad, then finally got on the playing field in the final game of the 2004 season. The Pats waived him at the beginning of training camp in 2005 and he was picked up by the Browns. Kelley appeared in 35 games for Cleveland and was inserted into the starting lineup in 2007 by Romeo Crennel after Ted Washington went on injured reserve. Kelley suffered a knee injury in week 16 that required microfracture surgery, ending his NFL career.

The Patriots added the former Seahawk after Pete Brock tore cartilage in his knee in a late season game against Miami. Art Kuehn played one season in the WFL and seven with Seattle prior to arriving in Foxboro. He played in two games with the Pats, then finished his pro football career with two seasons in the USFL. The native of Palo Alto and UCLA graduate played in 100 NFL games.

Two other players from wayback that were born on this date with a New England connection:

Walt Williams (1919-1990)
Boston University; Boston Yanks
Williams was a defensive back, halfback and punter in the late forties.