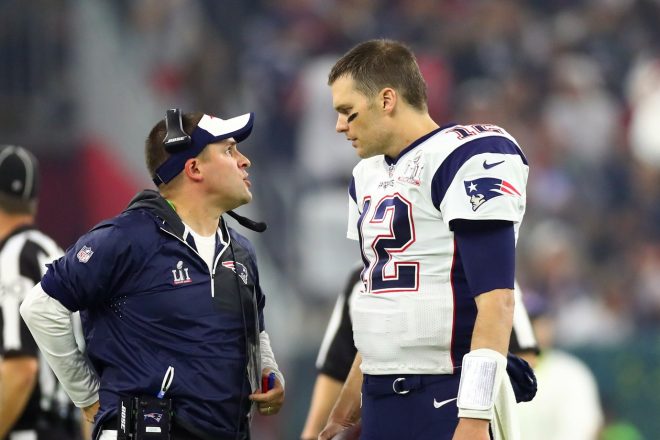 With the Patriots out of the playoffs, it is strange without a football game to play in the divisional round. It is a reminder to how blessed we’ve been around here since Belichick and Brady took over the playoff landscape in 2001.

There are a lot of variables in play this year and the 2020 team may look quite different. But don’t be throwing dirt on this team just yet.

Tom Brady – The Patriots QB (and yes…he still is until we hear different) addressed his Instagram post from earlier this week on the Westwood One radio show with Jim Gray. Brady spoke about his comment that he still has a lot to prove in this league.

“Well, it’s always been proving it to myself. and being motivated internally to push myself to the limits,” Brady said.

“And sometimes the limits push back, I’ve experienced that, but I also think I’m inspired by so many people who push the limits. You know, I watch a lot of movies, I love watching documentaries of incredible human feats, and they’re inspiring when people climb these mountains and do things… things people never thought were possible,” he added.

“And I’m at a certain point in my career where people think what I’m doing is, to a degree, impossible. For me, it’s about continuing to prove to myself that I can lay it all on the line and we can still try to achieve the ultimate goal, which is winning Super Bowls.”

Brady added a quote about his contract status with Gray, stating, “The contract things, a week after the season, I would say these things haven’t even started to pick up. It’s really not my concern at this point,” he said.

Andy Dalton – Really? Bart Scott started this Dalton to NE narrative, with no real basis but then a few others in print and on the air…say “it is a fit” For whom? And now it is being reported as a possibility. Yeah right, and Bill may hire me as a coach on the special teams too.

Julian Edelman – The Patriots WR needs surgery on both his shoulder and knee but we thought that a while ago. But Edelman is (not surprisingly), the Patriots 2019 recipient of the 2019 Ed Block Courage Award. The honor is bestowed annually upon a player who best exemplifies the principles of courage and sportsmanship while also serving as a source of inspiration. Watching him play through those injuries this year, that honor is no surprise… Well deserved.

Joe Judge Takes Over the Giants:

With every passing year, it always seems that Bill Belichick’s coaching staff is getting picked through as many of his coaches, move up and move on. The latest was STs Coordinator/WR coach Joe Judge.

When we heard he was being interviewed for the Giants’ open head coaching position, we put him pretty low on the possibility chart of getting the nod. We were wrong. Judge dazzled the Giants owner John Mara during the interview and got the job. Having worked for both Nick Saban and Bill Belichick, Judge got to learn from some of the best.

But while he takes some of the same philosophies from his mentors, he is definitely his own man. Anyone who watched him in the spring/summer workouts would see that. And in his introductory press conference, despite what some hot takez bobos have said, he nailed it.

“I want teachers, not presenters,” Judge said of his coaching staff. “I don’t want someone who looks fancy in front of the screen that can say it with a lot of different sales lines. I want teachers, I want old school people who can get to our players and give them the mental image of what it’s supposed to look like. I want them to demonstrate on a daily basis the work ethic of what it’s going to take to do it successfully day in and day out.”

The Cleveland Browns vacant head coaching position is still open as of Saturday evening… but perhaps the Browns saved the best for last. Josh McDaniels was the last candidate to interview and he and his wife spent seven hours at the Browns HQs.

Whoever does get the job will have to work the analytics team of Paul DePodesta closely. They’ll have a say in coaching and personnel decisions. McDaniels is from the area and would no doubt try to bring some more New England people with him. One name being thrown about is Director of Pro Player Personnel Dave Ziegler who may become a candidate for the vacant GM job.

McDaniels was a huge fan of Baker Mayfield when he came out in the NFL Draft and visited with him three days before the draft while urging the Patriots to move up and take the QB. It will be intriguing to see if McDaniels gets the job, who the next Offensive Coordinator of the Patriots will be. The Browns are expected to make their decision within the next few days.

NFL Schedule Divisional Weekend, Who Are Your Winners:

How are you feeling about the games this week? We have a post on our PatsFans Forum where our readers can predict the slate of games for that week. Here is the link if you’d care to pick your own: https://www.patsfans.com/new-england-patriots/messageboard/picks/

The Buffalo Bills Offensive Coordinator Brian Daboll is one of the candidates for the vacant Cleveland Browns head coaching position. While Buffalo’s offense remains very much a work in progress, it is easy to see how Daboll is changing the offense from the awful unit that it was a few years ago to one that is definitely on the upswing.

Daboll’s good work begins with QB Josh Allen, who made big strides in Year 2 and is trending upward. Buffalo’s offense still has a long way to go, but if they lose Daboll, it may set them back.

Also on the Browns’ radar is assistant GM Joe Schoen who is one of the candidates for Cleveland’s vacant GM position.

Dolphins DC Graham May Be the Giants Choice for DC:

The Miami Dolphins were rebuilding in 2019 but finished strong going 5-4 down the stretch. But now the New York Giants have requested to speak to Miami’s DC Patrick Graham. The Giants new coach Joe Judge would like to add Graham to his staff as the Defensive Coordinator, a lateral transfer.

Graham coached with the Giants in 2016-17. Miami has already fired OC Chad O’Shea and if they lose Graham, they will be putting a lot of pressure on Head Coach Brian Flores to rebuild his team and start from scratch with his coordinators.

With Flores trying to build a winning culture into the program, losing both coordinators after just one season would not be the best scenario for Flores.

The New York Jets quarterback Sam Darnold was banged up physically in his sophomore season, and he had some needed surgery to repair the damage the toll of the 2019 season did to him.

Darnold underwent a surgical procedure Tuesday to repair a ligament in his left thumb. The surgery was performed by the Jets team doctors, and he should be ready to go when the Jets begin their offseason workouts.

Darnold had to deal with this thumb injury for the final two months of the season. He originally injured it in a loss to the Jaguars on Oct. 27. However, he played through it and wore a brace under a glove on his left, non-throwing hand.

“Honestly, look, I know it’s out there, just like there’s a lot of other things out there. We could bring up 50 questions just like that one, and I told you what my state is on that. You can ask all 50 of them and it’s going to be the same answer 50 times, Ben. We’ve been working on Tennessee, it’s 12 hours after the game, not going to talk a lot of things about the future because it’s not – I’m not prepared to talk about it.” – Bill Belichick on if he’d like to have some clarity on Tom Brady’s situation.