3 years ago at 9:35 am ET
Follow @IanLogue
Posted Under: Patriots News

After losing two in a row the Patriots got back on the right track with an impressive 34-13 win over the Bengals on Sunday.

Here are a few thoughts on the win, which improved New England to 11-3 on the season.

1) With the Patriots as depleted as they are at the wide receiver position, Sunday’s performance by rookie wideout N’Keal Harry was certainly impressive but more importantly, it was much needed.  The rookie finished the afternoon catching two of Brady’s four targets thrown his way including a terrific grab in the back of the end zone for one of New England’s touchdowns.  What’s even more impressive was the fact they both came on 3rd down, which clearly shows how far he’s come in recent weeks.

The rookie was also used as part of New England’s ground game, with Harry carrying twice and accounting for 22 of the 175-yards the Patriots put up against the Bengals defense rushing the football.

However, it was one of the receptions he made that didn’t show up in the stat sheet that gave fans a glimpse of what he’s capable of, with Harry making a terrific diving reception early in the game that would have gone for 36-yards but was negated by a false start by Julian Edelman.

Coming into the game, offensive coordinator Josh McDaniels had said that he planned on getting the rookie involved more in the offense.  That seemed to be the plan on Sunday and it was a nice step forward Harry, who will potentially be a big key here down the stretch as New England begins their push for a top seed over these final two games.

2) Wide receiver Julian Edelman was a game-time decision and after watching him Sunday afternoon, he definitely appeared to be significantly hampered during this one.

Edelman finished the afternoon with two receptions for just 9-yards and really labored through the contest, which wasn’t really a big surprise.  Reports coming into the game said he’s dealing with both a knee injury and a significant shoulder injury but he continued gutting it out.

The veteran was targeted five times on Sunday and didn’t look close to like himself, but he battled through.  There’s no rest for the weary as New England faces a tough test with the Bills coming into Foxboro on a short week next Saturday and Buffalo is still playing well, having beaten the Pittsburgh Steelers 17-10 in a hard-fought game Sunday night.

In their last meeting, New England barely escaped with a 16-10 win out in Buffalo and were actually playing better offensively at that point compared to where they are currently.  Hopefully, things go a little differently this weekend and they’ll be able to get out in front early and limit Edelman’s time on the field.  He’s been critical to their success in the past and they’ll definitely need him healthy here down the stretch if they hope to have success in the postseason. 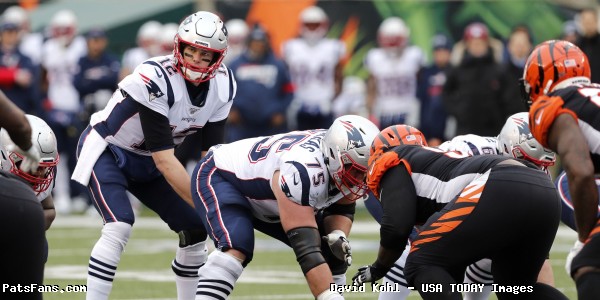 Brady had decent protection on Sunday in Cincinnati.

3) It was another nice step forward for the Patriots’ offensive line who, for the most part, did a pretty decent job in the running game on Sunday.  They helped open up holes for New England to put up 175-yards on the ground, 89 of which came from Sony Michel.  Michel carried 19 times and averaged 4.7 yards per carry, looking more explosive than we’ve seen him all season as he broke through several tackles and managed to make some tough yards after contact.

Rex Burkhead also played well, with Burkhead coming in and putting up 53-yards on 6 carries, including a touchdown.

Despite two sacks, Brady also got relatively good protection and had time to throw, which helped New England pull away in the second half after the defense pulled off a couple of turnovers.  That was important because like Edelman, Brady clearly appears to be dealing with some pain of his own as he missed some throws he normally makes.

The Patriots’ success is likely going to depend on how this group performs and it remains a work in progress as the team continues dealing with injuries.  This has been a difficult year to say the least but they’ve at least taken steps forward.  Hopefully, they’ll take another next week against the Bills. 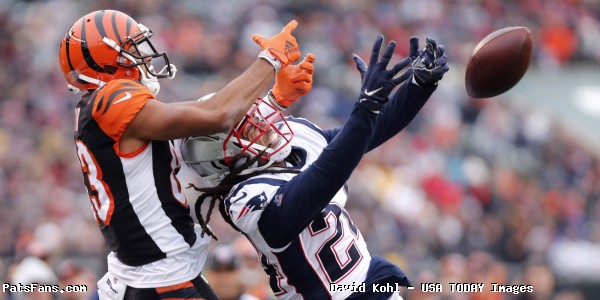 Gilmore has had one of his best seasons this year.

4) Watching Stephon Gilmore on Sunday was a reminder that the Patriots clearly made the right decision when it came down to investing their future in the former Buffalo Bills defensive back in lieu of former Patriot, Malcolm Butler.

At the time, that was one of the more heated debates of the offseason and most fans had seen little of Gilmore, who the Patriots had had some success against in their previous meetings prior to his signing.  Gilmore received what at the time was one of the largest contracts given to someone at that position by the team, but he’s earned every penny during his tenure with the team and Sunday was another great example of his value.

As we’ve seen several times this season, some of the interceptions made by New England’s defenders have simply come from being at the right place at the right time and being alert enough to make a play.  But both of Gilmore’s turnovers Sunday due to the defensive back showing off his athleticism, with each instance seeing him run the route stride for stride with the receiver and then break in front of the football to make the reception.

That was the most obvious on the interception where Gilmore scored.  On the play, he made a terrific move to cut off the pass and snatch away the football, taking it 64-yards the other way for the touchdown.  Both of those plays solidified that Gilmore is clearly the best cornerback in the game right now and the Patriots’ success may hinge on how he continues to play in the weeks ahead.  In the postseason, turnovers and big plays matter and New England is fortunate that despite an already impressive season, Gilmore appears to be peaking even more at just the right time.

5) One of the most important aspects of Sunday’s game was quietly the fact kicker Nick Folk looked much more like himself, which comes one week where he didn’t see much action but didn’t quite appear to have recovered from the emergency appendectomy that had sidelined him.

Against the Chiefs, Folk hit one of two attempts and had one blocked, but did connect on his only extra point attempt.  He didn’t look comfortable and it was apparent that his range was also limited given how it affected their offensive decisions that afternoon.  On Sunday he looked much better, hitting each of his two field goals right down the middle, although long kicks appear to be his only weakness.

The absence of Stephen Gostkowski has been one of the issues plaguing this football this season but the fact Folk appears to at least be getting healthy is a positive sign given how important the kicking game is as they continue trying to make their push toward the postseason.  While extra points have been a problem, Gostkowski’s prowess when it came to field goals has always been an asset and it’s been frustrating to watch how not having that has affected some of their decisions this season.  Adding into it the fact that the offense has struggled, the timing of Gostkowski getting hurt certainly hasn’t helped.

Fortunately, Folk has at least been serviceable and appears like he might give them enough to do some damage in tight games.  The big question at some point could come down to whether or not he can come through with a key kick to win a game.  We know Gostkowski had it in him but Folk has yet to really be put into that situation.  Hopefully, the offense will get it together and if all goes well, we won’t have to find out.

The Patriots will now spend this week preparing for a visit from the Bills, who will be looking to keep New England from clinching the AFC East when the two clubs meet in a key showdown on Saturday afternoon at 1:00pm.