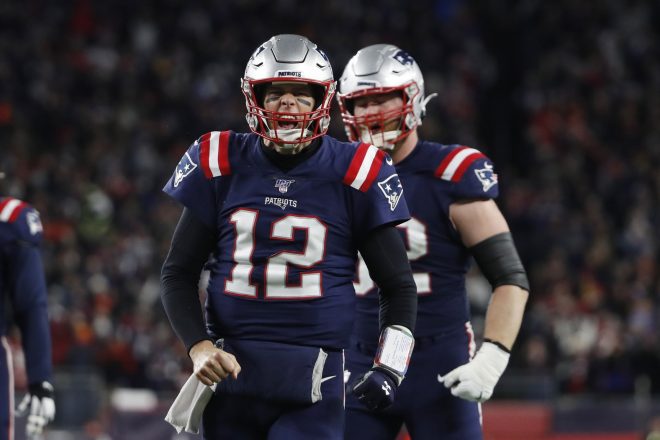 FOXBOROUGH – Enough complaining from opponents who claim that the Patriots get all the calls.

Despite the fact that the Kansas City Chiefs basically outplayed the Patriots for most of Sunday night at Gillette Stadium, it felt in the end that the officials screwed the Patriots out of perhaps 14 points, and in the end the 23-16 loss was more regrettable than meets the eye. Several calls went against the Patriots that turned out to be rather consequential, which in the end might have at least sent the game to overtime.

A loss is still a loss, and the Patriots are now hoping that they can at least finish with the two seed and a first-round bye, which is well within reach with three games left. But Kansas City exposed to the world that the Patriots did indeed run up an 8-0 record thanks to weak competition, both on offense and defense. The three losses the Patriots have suffered this year have been to all three of the other AFC division leaders. The Chiefs shook off a slow start and basically took it to the Patriots on the road, and only until the Patriots cracked the defensive code of the Chiefs in the fourth quarter did things finally get interesting.

Take away any officiating transgressions, and the bottom line is this: The Patriots as currently constructed are not built for winning a championship this year. The offensive line was weakened with the loss of David Andrews, the offense still misses Rob Gronkowski and James Develin, and the receiver corps is still too green around the gills to make big time plays. The defense plays very well against weak opponents, but against top quarterbacks like Lamar Jackson, DeShaun Watson and Patrick Mahomes, the defense looks more pedestrian. The Patriots have been hurt also by the season ending injury to kicker Stephen Gostkowski, and the kicking game has influenced some in- game decisions.

That said, the Patriots can rightfully say that the officials took away some impetus in trying to erase a 23-7 third quarter deficit. Credit the Patriots for being in a position to tie the game late in the fourth quarter, but some plays along the way had a direct impact on the end of the game and the Patriots’ ability to tie the game with just under a minute left.

The first such controversial play took place towards the end of the third quarter. On third down and four at their own 35, Mahomes was able to hit Sammy Watkins on a left slant route. Devin McCourty hit Watkins right at the down marker and pushed him backwards, but the officials spotted the ball at the 40, a yard further than where McCourty hit Watkins. Bill Belichick was forced to throw the challenge flag, and replay showed that McCourty hit Watkins at the 39, not the 40, but the call stood and the Chiefs had a first down at the 40.

This turned out to be inconsequential, because of how the drive ended. However, the end of the drive led to the second controversial call.

Facing third down and two at the Patriot 37, Travis Kelce caught a slant pass and was covered immediately by McCourty. Kelce retreated backwards, behind the line to gain for a first down (the 35), then was stripped of the ball by McCourty. Stephon Gilmore picked up the loose ball and took off towards the end zone. But the officials blew the play dead, saying that Kelce was down by contact.

Belichick was again forced to throw the challenge flag. On replay, Kelce clearly fumbled before he hit the ground. The Patriots were awarded the ball, but they got it at their own 43, where Gilmore picked up the ball. Watching the play live, Gilmore had a path to the end zone and a scoop-and-score, with only Mahomes and offensive lineman Austin Relter in his way. Perhaps one of those two guys stop Gilmore, but the chance of him running by them both was rather good. This play may have taken away a touchdown. Worse, Belichick had no more challenges left by using up two and winning one and losing one.

In the end, this proved to be costly. The defense kept Kansas City off the scoreboard for the last quarter and a half, and a blocked punt by Nate Ebner set up a Brandon Bolden touchdown run in the third quarter to make it 23-13. After getting the ball back following the Gilmore fumble recovery, the Patriots drove to the Kansas City 15. On first down, Tom Brady hit N’Keal Harry in the left flat. He found a sideline route to the end zone and dove for the pylon. He was marked out of bounds at the three-yard line. Replay showed that Harry had actually hit the pylon without ever going out of bounds, which was a touchdown. But since Belichick was out of challenges, he was powerless to appeal to the officials and the Patriots had to settle for first and goal at the three.

One more egregious bad call was yet to come. The Patriots did get the ball back with a chance to tie the game. Facing second down and fifteen at the Kansas City 38, Brady lofted a pass deep left to Philip Dorsett. Dorsett was literally held by Kendall Fuller, but no pass interference was called. Since the two-minute warning had not yet occurred, again Belichick was powerless to challenge the call. The interference on Fuller was obvious, and replay made it clear and easy to overturn the call.

Like the missed first down mark, this call again was largely inconsequential as the Patriots eventually made it to the Kansas City five-yard line. On fourth down and three, down to their final play, Brady was able to find Julian Edelman in the left corner of the end zone. Just as the pass reached Edelman, Bashaud Breeland knocked the ball away at the last second to cinch the win for the Chiefs.

The Patriots can run the table from here. They are at Cincinnati next week, then home against Buffalo and Miami. The Bills’ game will be a stiff test, but the Patriots will be at home and that should be the deciding factor. They would finish at 13-3 and get (presumably) the second seed in the AFC, just like last year. It is unlikely that the Patriots will pick up 2 games on Baltimore from now until the end of the season. Baltimore survived a tough test at Buffalo on Sunday, and they look like the team to beat in the AFC this year.

The officials were tough. But the Chiefs were a little bit better. The Patriots have a lot of work to do, and worrying about the zebras shouldn’t be on that to-do list.

READ NEXT:
After Tough Loss, Patriots Remain a Team Full of Questions
Posted Under: Patriots News