3 years ago at 4:00 am ET
Follow @bob_george
Posted Under: Patriots News 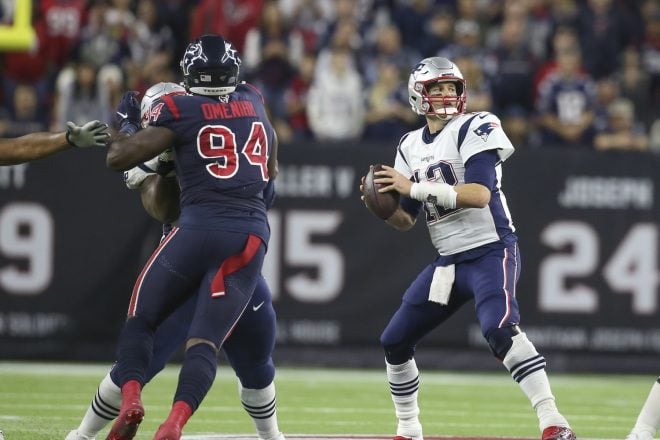 HOUSTON – Sunday, November 8, 1987 was an historic night in NFL history.

A new tradition began that night: Sunday Night Football. Halfway through a strike-marred season, ESPN began televising a third game on Sunday with an evening battle to finish the day. The NFL already had a Monday night game, still on ABC back then and still popular going into its 18th season back in 1987. But the NFL felt that another weekly night game was a perfect fit for the doting football public, even with the game being on cable.

ESPN was in its 8th season back then, and was nowhere near the Worldwide Leader it is today. But the sports broadcasting giant created by two guys from Wilbraham took a major step towards what it would become by delving into the most visible and substantive sports league in the USA, then and now. The first game featured the Patriots and the Giants from the Meadowlands, with Mike Patrick and Roy Firestone at the mike, along with a weekly guest commentator.

In an eerie harbinger of things to come many years hence, the Giants beat the Patriots 17-10. These Giants were the Super Bowl champs who had someone named Belichick as their defensive coordinator. The Patriots started off on the wrong foot on Sunday nights, and not much has changed since.

Actually, a change did happen. In 2006, a seismic shift happened in terms of television coverage, not unlike when Fox took over the NFC in 1994. ABC, after building Monday Night Football into a national cult event, walked away from broadcasting NFL games completely. ESPN took over the Monday night package, and NBC, who lost the AFC to CBS when Fox took the NFC from them, got back into NFL coverage with a major splash. They took over the Sunday night package, and over the years built the program into a bigger primetime event than ABC ever did on Monday nights. With glitzy opening songs from Carrie Underwood (and now alongside Joan Jett), former ABC Monday night icon Al Michaels took over as lead broadcaster. He worked with John Madden for many years and now is paired with Cris Collinsworth. The productions are almost like celebrations of the sport rather than the game itself.

Most all of the nation loves these events. Nielson ratings bear that out. But you the Patriot fan should think otherwise.

Since NBC took over the package in 2006, the Patriots at least have a winning record, but given a team of its dynastic stature, the record for the Patriots on NBC is only 18-12, counting both the loss Sunday night at Houston, and the earlier loss this season at Baltimore, 37-20. Despite the winning percentage, a team like the Patriots should have a much better win percentage. Instead, the Patriots generally play their worst game or games of the season on Sunday night.

In 2006, things started badly on NBC for the Patriots with home losses to both the Denver Broncos and the Indianapolis Colts. The Patriots won all three games in 2007; of course, that was the 16-0 season that ended badly in the Super Bowl against the Giants. They lost the next four games on NBC, including the famous “Fourth and two” game at Indianapolis in 2009.

Things got a little better over the years, but 2012 wasn’t great. They lost on a walkoff field goal at Baltimore, and lost a shootout at home against Colin Kaepernick and the 49ers. On Thanksgiving night that year, they did beat the Jets thanks to the Mark Sanchez “butt fumble”, but that was Thursday night, not Sunday.

The Patriots saw a little Sunday night prosperity the next few years, with the Jonas Gray game and the “We’re on to Cincinnati” game mixed in. But then there was the overtime loss at Denver in the snow in 2015 which ended a perfect season and eventually foreshadowed a playoff loss at Denver in January. Seattle came to Foxborough the next year and won a tough 31-24 decision, avenging the Super Bowl loss (that Super Bowl was on NBC, the only Big Game the Patriots have won on the Peacock).

You would think the Patriots had Sunday night figured out with a big win in Denver in 2017. But then they cut a bad stinker at Detroit last year against former defensive coordinator Matt Patricia. They won a ghastly shootout against Kansas City at Gillette later that year, then later beat the Chiefs in the AFC Championship at Arrowhead back in January.

Despite the Texans having the worst red zone defense in the league, the Patriots had to settle for a chip shot field goal after their first offensive drive of the game stalled at the Houston 5-yard line. On their second offensive possession, the game changed permanently as Tom Brady was intercepted by Bradley Roby trying to hit N’Keal Harry in the left flat. Two plays later, DeShawn Watson hit Duke Johnson on a wheel route in the right flat with Kyle Van Noy in futile pursuit for 14 yards and a touchdown. On their next drive, Houston drove 88 yards in 13 plays which took just under seven minutes. While Brady screamed and yelled at his offensive teammates on the sideline, the Patriot season basically went up in smoke as Baltimore took over the top playoff seed in the AFC and might not let go of it.

Credit the Patriots for not giving up. They did manage to pull off a first down in the third quarter despite facing first down and 30. Brady did manage to rally the Patriots in the fourth quarter with two touchdown passes. But the Patriot defense, perhaps weakened by the flu, allowed Watson to take over the game. Watson finished with 18 of 25 passing for 234 yards, three touchdowns, and also scored a touchdown reception on a pass from DeAndre Hopkins. Watson’s passer rating was 140.7. Brady had 24 of 47 passing for 326 yards and three touchdowns, but had a passer rating of only 85.9.

The game did come down to a late onside kick with 50 seconds left. Jake Bailey managed to pull off an onside kick that bounced over every Houston defender, with Brandon Bolden streaking downfield to make the recovery. But the ball rolled out of bounds before Bolden could recover the loose ball, and the game was over.

Kansas City comes to Gillette next week, bring Patrick Mahomes, Tyreek Hill and Travis Kelce with him. Last year the Patriots eked out a 43-40 win against the Chiefs, but the Patriots may not have the material to pull off a win like that this year.

Fortunately, the Patriots won’t be flexed into Sunday night. They’ve been on NBC three times now, and that’s it. The Patriots need to just secure the division, and worry about all the other stuff when the time is right.

Somewhere along the way, the Patriots need to get their passing game back. And make Brady happy again. If not, never mind Baltimore jumping ahead of the Patriots. Buffalo will be next.