3 years ago at 7:33 am ET
Follow @SteveB7SFG
Posted Under: 2019 Patriots Regular season 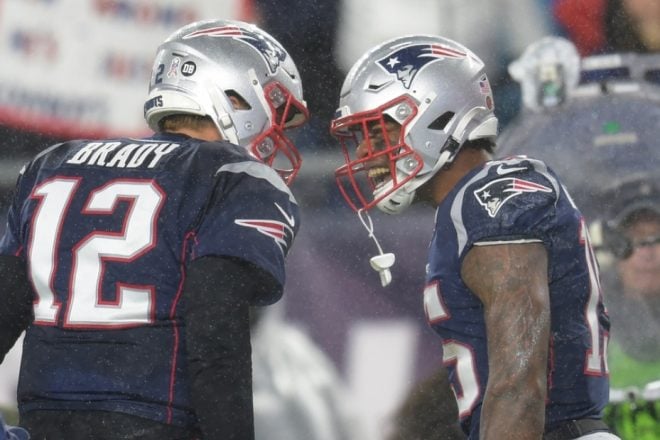 Sunday afternoon was a time for the defenses to shine, with the weather conditions difficult at best for the offenses to get untracked and the Patriots and Cowboys defenses pretty much dominated the action. But in the end, the Patriots made a few more plays than Dallas did and came away with a hard-fought 13-9 in a wet, windy and miserable Gillette Stadium.

The effects of the weather can’t be minimized, there were times when the rain was driving sideways, making ball handling difficult, the kicking game a crapshoot and throwing the ball on-target hit or miss. It isn’t a coincidence that all three missed field goals were all toward the open end of the stadium where the wind at times was whipping intermittently.

With the Patriots banged up physically entering the game and having over a quarter of the active roster questionable for this game, coaching played an even larger part in this one. Bill Belichick put together a tremendous game plan to slow down the #1 offense of the league and they did. Dallas had three field goals to show for their efforts on the afternoon.

On the flip side, Jason Garrett did things there were head-scratchers, but it has become what we’ve come to expect from the Cowboys coach. Facing several 3rd and 1 situations and with Ezekiel Elliott in the backfield, he chose to throw against the #2 pass defense in the league. And down seven with just over six minutes to go in a game where his offense had scored six points, he opted for another field goal attempt knowing he’d still need a touchdown… Game over. Thanks for flying Belichick Airlines, be sure to place your tray tables in the upright position.

Yes the Patriots swept the East this season… the NFC East.

Can there be any doubt any more who is the best corner in football? Gilmore was absolutely brilliant as he held the Dallas wide receiver and Dak Prescott’s go-to guy without a catch for the first time in a Dallas uniform.

Cooper was Prescott’s first read and with Gilmore blanketing him, it through Prescott off all game long and he struggled to find his second read. Gilmore had an interception on a beautiful play where he trailed Cooper, baiting Prescott into throwing the ball on a drag route, believing him to be open, but then Gilmore undercut it and picked the ball off.

Two of Prescott’s go-to guys in this game were basically taken out of the game completely. Cooper had zero catches with an interception while being targeted, while Jason Witten had one catch for five yards on four targets. Outstanding job by the Patriots coaches and defense taking those two right out of the game and relegating them to a milk carton.

We’ve been beating the dead horse since the spring that Harry, the Patriots big 1st round draft pick could be a viable red-zone target for the offense. The rookie WR had his development delayed due to an injury, putting him on IR but he played in his first game last week. This week Harry scored his first NFL touchdown, in the red zone.

From the 10-yard line, Harry ran a fade route and Brady put the ball up where only Harry could get it and he did a great job, snatching the ball out of the air, coming down and just getting his feet inbounds with possession.

They went back to him later in the game, but he couldn’t come up with that one as the ball went through his hands. It will be something we should see more of as the season winds down.

Fellow rookie WR Jakobi Meyers had a pretty solid game with four catches for 74 yards including a big 32 yarder where he shook off a tackle and got about 25 yards after the catch.

In a very solid effort, the defense slowed down the Cowboys big running back and limited his effectiveness at influencing the game at key points of the game. We pointed out in our pregame notes, the Patriots weren’t going to shut down Elliott and they didn’t, Elliott had 86 yards on 21 carries for a 4.1 average.

But Elliott and the Dallas offense never got the running game going to the extent that they were controlling the line of scrimmage and the tempo of the game. (See our comments above on the 3rd and 1 situations)

Running behind one of the best offensive lines in the NFL, the Cowboys ran the ball fairly well but the Patriots defensive line did a good job at slowing them down at the point of attack. Lawrence Guy had another strong game inside and having Pat Chung back was huge for the defense as he always has a strong presence in the box.

Meanwhile, the moribund Patriots rushing attack had a good game of running the ball and especially when they HAD to run the ball at the end of the game. Was it perfect? Obviously not. But in a year where they’ve struggled to run the ball at all, it was a good first step. Getting Isaiah Wynn back was a big plus and it wasn’t a coincidence that Michel’s big run on 2nd a 5 at the end the game that iced it was behind his big teammate at Georgia.

Michel ended up with 85 yards on 20 carries, a solid 4.5-yard average. At this point, the Patriots will take that, and give them something to build off of moving forward.

Brady Plays Solid With a Banged Up Group of Receivers:

Oh, the talking heads on those hot take shows that overpopulate the media now will no doubt disagree but if you watch those bobos and subscribe to that drivel…shame on you. With an offensive line that has underperformed this season, a running game stuck in neutral and entering the game with his top WR who can’t raise his left arm over his head, they did well enough to win. And BTW, his #2 and #3 wide receivers were out.

Julian Edelman gutted out another tough game and it seemed after every play, he was trying to loosen that banged-up left shoulder. But he caught eight passes for 93 yards. After that, Brady had undrafted rookie Jakobi Meyers and rookie WR N’Keal Harry playing in just his second game of his career.

The Patriots had six drops by my count and several others that were contested and they couldn’t come down with. With those 10-11 passes going their way, Brady’s numbers would have looked much more impressive.

His best throw? Facing a 3rd and 20, Brady slid in the pocket to avoid pressure from the inside and unleased a dart to Edelman, who had just enough yardage to move the sticks. Dallas was in a Cover 2 shell, and Edelman found the soft spot.

Where is James White?

It is beginning to look like James White may be dealing with something physical because in the past few weeks his production and usage are way, way down. White had just two carries for five yards against the Cowboys and a single catch for -6.

We’ve become so accustomed to seeing him be a big part of the offense, especially in the passing game, it is surprising to say the least for him to be relegated to a non-factor for several weeks in a row.

He may be fine health-wise but it definitely seems like something is amiss with the Patriots “Swiss Army Knife” on their offense. With just three targets and one catch for negative yardage (great play by former Patriot Michael Bennett), it is becoming worrisome, especially for a passing game that is already missing some key pieces.

Regardless of style points, the Patriots won a close one and are now 10-1 on the season. They maintain a two-game lead in the AFC East, where the Bills are now 8-3 (for all my Dallas friends who complain about the AFC “Least”, the Bills would be leading your division by two games…just sayin’)

And they maintain at least a one-game lead over Baltimore in the AFC (pending their game on Monday Night Football). We’re on to Houston.