3 years ago at 7:32 am ET
Follow @SteveB7SFG
Posted Under: 2019 Patriots Regular season 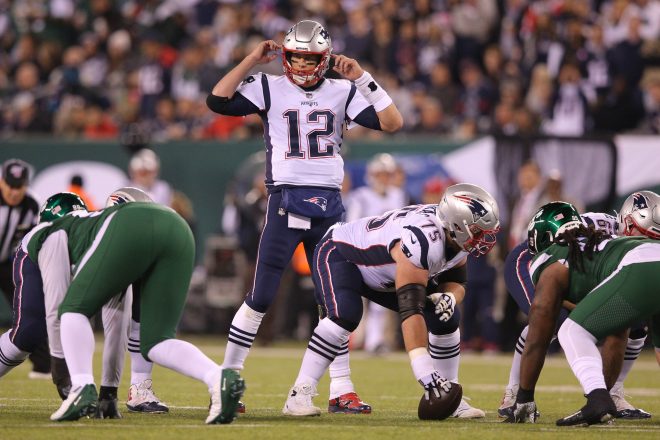 In the end, it wasn’t any more contested or closer than the first meeting. The Patriots’  defense flummoxed, frustrated, and dominated the Jets from the opening bell. They throttled the Jets in a 33-0 embarrassment in front of a national television audience on Monday Night Football.

Just a week after Sam Darnold made a triumphant return from an illness and was the AFC’s Offensive Player of the Week, the Patriots had him literally “seeing ghosts” in the first half, forcing him into 5 turnovers. Darnold, who is one of the up and coming young quarterbacks in the NFL was left tonight looking silly and quite unprepared.

But if Darnold was left seeing ghosts or Boogeymen in his sleep tonight, he didn’t have the worst game on the New York side. Head Coach Adam Gase was taken to the woodshed by Bill Belichick, his team looked completely unprepared and Gase made no adjustments that could be seen and left his young quarterback in far too long in a game that was decided in the first 30 minutes.

The Patriots put a stamp on this one early. After receiving the opening kickoff, Tom Brady led a methodical, perfectly executed, time-consuming, soul-sucking drive that covered 14 plays and ate up nearly nine minutes of the first quarter. The much-ballyhooed return of MLB C.J. Mosley was nonexistent as Brady and the offense converted 3rd downs of 7, 10 and 5 yards before Sony Michel finished it off with a 3-yard touchdown on 3rd and 2.

The Jets’ first possession took just two plays for the defense to force its first turnover of the night, one of six in total, five of which belonged to Darnold (four interceptions and a fumble). On 2nd and 8 from the 10-yard line, the Patriots overloaded a blitz on the right side and Darnold, under pressure lobbed the pass too high and it was easily picked off by Devin McCourty.

What a difference a week makes. After Darnold picked apart the Cowboys, the confidence level was running high in New York. Darnold was talking about finding the weaknesses in the Patriots’ defense and exploiting them. He even added that once  TE Chris Herndon returns the Jets offense would be “unstoppable.” Not exactly bulletin board material, or overly cocky, but he and the Jets offense had no answers to what was to come.

Gase, in another move that will be dissected for a long time to come, allowed his young quarterback to be mic’d up before the game, perhaps allowing himself the fleeting thought that after last week, this was to be the changing of the guard in the AFC East. Late in the first half, ESPN ran a clip of Darnold on the bench where he looked lost and admitted he was “seeing ghosts out there”. That clip, unfortunately, will follow him for a long time to come.

What the Patriots did on defense was simple in its plan and yet brilliant in its execution. They blitzed the woeful Jets offensive line with the linebackers (Boogeymen) running free and forcing Darnold to throw off his back foot all game long. Or they would show the blitz and drop seven into coverage and give him nowhere to throw the ball.

The Jets never adjusted, and never found an answer. While the Patriots only had one sack for 13-yards last night, the pass rush was the biggest factor for the defense. They had Darnold throwing off his back foot where the ball was continuously sailing on him. Darnold finished the game just 11 of 32 for 86 yards with four interceptions and a fumble. His passer rating for the game was just 3.6. He threw as many interceptions as the Jets were able to pass for first downs. They averaged just 2.7 yards per game.

Le’Veon Bell had a nice game with 15 carries for 70 yards including a couple of really nice runs where his patented patience allowed him to bust a few where it appeared he had nowhere to go. But in truth, he was a total non-factor.

Robby Anderson, fresh off his big game against Dallas was once again relegated to a milk carton by Stephon Gilmore. Anderson had one catch for 10 yards while being targeted eight times. Gilmore had one of the Patriots’ interceptions. Demaryius Thomas who was chirping at the Patriots and Bill Belichick last week, made it sound like a big revenge game fell flat on his face. Targeted nine times, he had just three catches for 42 yards.

If there was one downer on the defense, it had to be that cornerback J.C. Jackson was being singled out by the referees for flags. He was whistled for three penalties on the night.

But back to the offense. For all the hand-wringing the fans and much of the media are doing, they scored 31 points, (the defense scored two on a safety), and when the game was still in doubt, put 17 points on the board in the first quarter.

Was it a well-oiled machine? Hardly. But missing two key offensive linemen including the left tackle, two fullbacks who are key to the running game, both tight ends, their “X” wide receiver (Josh Gordon) and their most productive running back (Rex Burkhead), they did what they had to do.

The Patriots’ two tight ends hadn’t played a snap this year but despite the lack of playing time and timing, both Ben Watson and Eric Tomlinson played a significant amount of snaps. Jakobi Meyers is building his trust factor with Brady more every day and was targeted five times and had five catches for 47 yards. He also drew a pass interference penalty on Trumaine Johnson that would’ve been a touchdown. Johnson bit on a double move and had to grab him or get burned. The usual suspects, Julian Edelman and James White each had seven receptions.

Tom Brady had a so-so night number wise but ran the offense efficiently and utilized everyone at his disposal, completing passes to eight different receivers. His two best throws were a nice 28-yard back-shoulder throw to supersub Brandon Bolden and a beautiful 26-yard touchdown pass to Phillip Dorsett who dusted Johnson in coverage.

Sony Michel had little running room, finishing with just 42 yards on 19 carries, but added three short touchdown runs. Edelman chipped in with a few jet sweeps. And linebacker Elandon Roberts, known for his downhill run-thumping style, was pressed into service as a blocking fullback for goalline and short-yardage. He did very well.

So while the pundits will continue to decry about the Patriots opponents or lack thereof, they don’t care. They’ve enjoyed this one for a moment and are already moving on the Browns.  After that they will face the Ravens, Eagles, Cowboys, Texans and the Chiefs. One at a time. Those games will ultimately define their season. But they are 4-0 in the division, including 3-0 in the division on the road, 4-0 on the road overall where they were just 3-5 last year.

Sleep well Patriots fans, and even though Halloween is still 10 days away (nine since it is officially after midnight), but remember Boogeymen do exist. I think they’ll be haunting the dreams of Mr. Darnold for many nights to come.