The Patriots improved to 7-0 after embarrassing the Jets in front of their own crowd and the world Monday night, demoralizing a New York team that had been riding fairly high coming into the game after beating the Cowboys the week before.

With Jets quarterback Sam Darnold back under center, New York seemed to be poised to turn things around and potentially give New England their first loss of the season.  Unfortunately for Darnold, the result was quite the opposite and here are some thoughts on the Patriots’ seventh win of the season.

1) It’s hard not to wonder how we’ll someday look back on this defense given the performance they’ve put forth so far through the first seven weeks of the season.  As Patriots fans, most people look back on the days of Ty Law, Willie McGinest and Tedy Bruschi as the glory days of this group, but the 2019 version has been far more dominant than anyone could have ever expected.

Monday night was certainly a terrific example of how good they could be after they forced six Jets turnovers, including 4 interceptions by Darnold.  It started right away after Devin McCourty nabbed the first, picking the Jets signal-caller off on just his second snap of the contest and setting the tone for the rest of the night.  The turnover gives McCourty an NFL best 5 on the season and it was a good job by the safety who made a nice play on the football.

They kept Darnold off balance all night and came at him from all angles, putting him under constant duress and forcing quite a few errant throws.  Darnold, who was mic’d up for the game, was spotted on the sideline saying, “I’m seeing ghosts” and that quote would come back to haunt him for the rest of the evening as New England refused to take the foot off the gas the entire night. 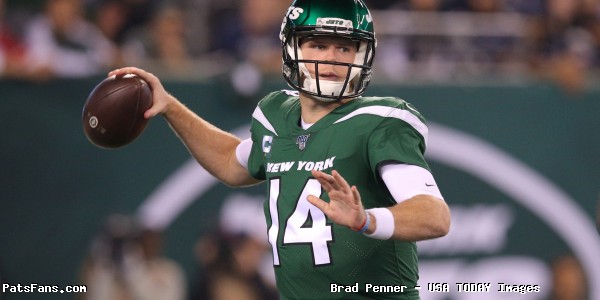 As Mike Reiss pointed out last night, according to ESPN Stats and Info, it’s the second-highest interception total through the first seven games in the last 30 seasons.  The only team with more is the Packers, who had 20 during their Super Bowl season in 1996 (unfortunately, most of us remember who they beat to win it).

The critics will point to the competition this group has faced so far, but good teams are supposed to beat up on inferior clubs and the Patriots did more than beat up the Jets, they absolutely annihilated them.  This is a group who collectively right now is playing so well as a unit and they didn’t back down all night.  In fact, despite the lopsided score, this game even had a strange feel as if it was still much tighter than the scoreboard showed given the fact they never let up and were playing just as hard in the fourth quarter as they were when the game started.

Needless to say, while it’s hard to believe, we’re witnessing history each week.  With 9 games stil left to go, this unit definitely appears poised to potentially write themselves further into the NFL record books and at the rate they’re going, it should be fun to see how it plays out.

2) With the Patriots without Josh Gordon Monday night, it was Jakobi Meyers who stepped up and had another solid outing.  Brady was 5-of-5 targeting him, with their chemistry starting on the first drive of the night after the Patriots faced a 3rd-and-7 at midfield.  Meyers hauled in a 9-yard pass to extend the drive, but then made a further impact on the ensuing 3rd-and-10 play where he made a key block to allow Julian Edelman to pick up 14-yards.

Both of those moments were big as it helped extend the drive and set up the eventual 3-yard touchdown run by Sony Michel.

It was good to see and Brady clearly appears to be finally getting some confidence throwing to him.  He also went to him on early downs, connecting on 3-of-3 targets for 34-yards on second down, including a 23-yard reception early in the second quarter that helped put them near the goal line to take advantage of a Darnold strip-sack.  That play eventually led to another Michel touchdown.

Overall, games like these could pay dividends down the road and with the addition of receiver Mohamed Sanu, who the Patriots acquired from Atlanta on Tuesday, this is a group that could suddenly become even more dangerous if Meyers can continue to grow into the speedy threat he already appears he can be. 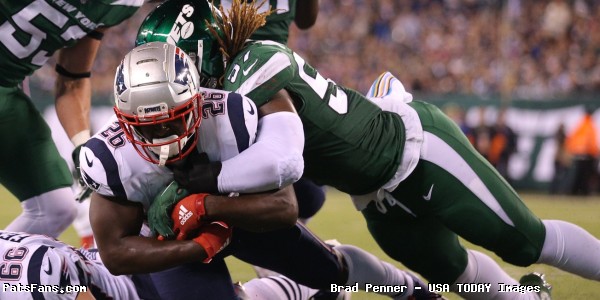 3) It was another tough night for Sony Michel, who despite his 3 touchdowns had to, once again, battle for nearly every yard.

It’s no secret that the Patriots are still trying to work things out up front on the offensive line and as a result, things aren’t coming easy for the second-year running back.  He carried 19 times for 42-yards Monday night, averaging a mere 2.2 yards per carry.  The frustrating part of last night is the fact that he failed to gain a yard 9 times, including 3 for a loss and 6 for no gain.

It’s been a difficult year for Michel, who coming into the game had 100 carries on the season, which isn’t far off from the 91 he had heading into week 7 in 2018.  But he certainly had better luck breaking through the line last season.  He had 15 carries last year through six games where he didn’t pick up a yard after he was dropped for a loss 7 times and ran for no gain on 8 others.

This season, that total was at 24 heading into last night, with 10 negative carries and 14 where he was stopped for no gain.

It’s not that hard to figure out knowing how injuries have caused shifts in the line-up compared to last season and it’s a further reminder of just how good David Andrews was in providing that middle push to open things up, as well as the effect the absence of James Develin is having.

It was interesting to see the Patriots experiment with several players last night to try and address the issue, with Elandon Roberts and James Ferentz as two players who saw action at fullback against the Jets and both did a decent job with their first opportunities.

Give Michel credit, as he’s remained pretty even-keeled so far this season and is still managing to have a productive year.  But we’ll have to see how things play out in the coming weeks as unfortunately, this quietly still remains an area to keep an eye on. 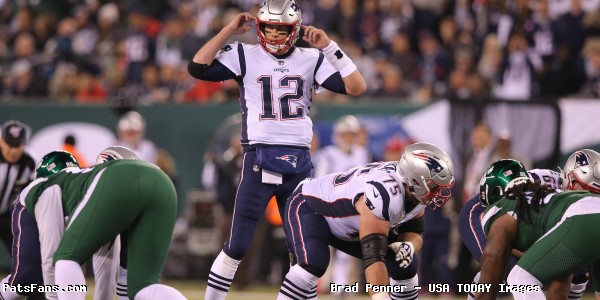 It wasn’t Brady’s best game, but he was certainly the better QB Monday night.

4) Tom Brady may have not had his best game last night but he was on point in the first quarter after completing 13-of-17 (76%) for 118-yards and a touchdown as New England pulled ahead of the Jets while building an early 17-0 lead.

Two of his best throws of the night came on their third possession where he threw a perfect back-shoulder strike to Brandon Bolden for 26-yards, which helped set up another flawless 26-yard scoring strike to Phillip Dorsett, which Brady dropped in perfectly in the back of the end zone where only Dorsett could come down with it.

The early down success was key as Brady was 11-of-15 (73%) for 57 yards on first down, along with 15-of-20 (75%) on second down.  That kept them out of long-yardage situations as they only faced 3rd-and-9 or longer on just 6 of their 16 third-down attempts.  That allowed them to continue moving the football and sustain drives, holding the football for over 38-minutes and giving their defense plenty of time to recharge and make Darnold’s life miserable.

But after the game Brady was happy but still appeared frustrated as he likely knows the offense remains a work in progress.  Hopefully, Tuesday’s addition of Sanu will start making things a little easier.

5) One player who managed to stay off of everyone’s radar Monday night was Mike Nugent, who quietly had a good game.

Nugent was a perfect 4-for-4 on extra points Monday night, as well as hitting a 34-yard field goal.  Each kick was straight and never in doubt, which is a stark contrast to his first outing where he was erratic and didn’t look anywhere near close to comfortable out there.

It’s a good sign as with the colder months coming, the kicking game tends to be a key part of the offense given how scoring tends to drop as the elements become more difficult for offenses to operate in.  Seeing Nugent settle in was a pleasant surprise and the fact he was able to go out there and get it done should have most fans feeling a little better since the Patriots will still need to soldier on without Stephen Gostkowski, who is lost for the rest of the season.

6) We’ll end on this note, which saw one of the most hilarious sequences in Bill Belichick’s tenure happen last night and it was pretty funny to watch how it all unfolded.

With just over 10-minutes to go in the game and leading 33-0, the Patriots saw their offense stall at the Jets’ 33yd line.  With the punt team on the field and facing 4th-and-2, the Patriots took a delay of game penalty, likely looking to give punter Jake Bailey a little more room to work with to pin the Jets in deep yet again.

From there, cameras caught Belichick smile, knowing he was still out-thinking Gase even at this point in the football game.  It was an absolutely terrific sequence and certainly will likely go down as a moment that will be mentioned years from now once he walks away.  Fortunately, all of us got to watch it happen in real-time.

It was all-in-all a great night and the Patriots will now return home to get to work as they’ll next face the Cleveland Browns at Gillette Stadium this weekend.