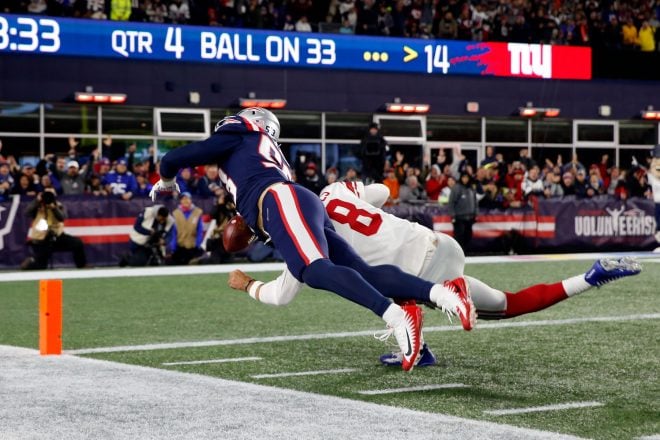 The Patriots took on the New York Giants last Thursday at Gillette Stadium, check out all the best sights and sounds from social media as they aimed for their sixth win of 2019.

📹 Bill Belichick in full Emperor mode checking out the field before #Patriots vs Giants #WBZ pic.twitter.com/5QEyZmhvZN

"You wanna know why Julian @Edelman11 calls himself the squirrel? That's because he IS A SQUIRREL." 🤣🤣@RobGronkowski: The greatest hype man! (@Patriots) pic.twitter.com/xuPeXSZr1y

Brady’s weekly single sip of water after running onto the field is a very sports guy thing. pic.twitter.com/GHuFK2uUXT

The pass that passed Peyton.

Brady tried to tackle after he threw his pick 🤔

After a sloppy start for the offense in the first quarter, it was the Patriots special teams unit that once again provided points.

Not that we're counting, but the #Patriots defense & special teams have scored four touchdowns this season.

Matthew Slater waited 12 damn years to score a TD and Chase Winovich gets one in his sixth game.

A 7-0 NE after one quarter courtesy of Brandon Bolden and Chase Winovich.

In the second quarter, Brandon Bolden found the end zone for the third consecutive game.

Three consecutive games with a touchdown for Patriots do-it-all back Brandon Bolden.

Leading 14-0, a few Patriots miscues and a little luck lead to a Giants comeback.

Golden Tate hauled in a 64 yard touchdown pass from Daniel Jones to get the Giants on the board.

SCORING UPDATE: Jones completes a 64yd pass to Tate, who battles with Jones & comes away wi/the football as he takes off for the TD. Longest pass play of the year given up by the defense, eclipsing the 45yd completion back in Week 1 vs Pitt. Pats Lead 14-7 w.6:05 left in the half

Markus Golden then recovered a Tom Brady fumble and returned the ball 42 yards to tie the game at 14 all.

From @ESPNStatsInfo: This is the first time since Week 12 of 2017 that Tom Brady has thrown an interception and lost a fumble in the same game.

Needing a rally, the Patriots responded with a Tom Brady rushing touchdown to regain the lead before halftime.

The Patriots would never again lose the lead on this night.

Leading 21-14 at the half, the Patriots honored team Hall of Famer Rodney Harrison one final time.

Stephen Gilmore by far is the best corner in the game right now. #shutdown #numberone

He knows what that looks like 💯 ✊🏾.
Spell check Stephon https://t.co/lHaATloY19

The greatest sin in football. pic.twitter.com/8DBkuawXRJ

Disappointing end to a solid drive. The Patriots ran 16 plays for 60yds, burning 9:25 off the clock. Nugent just couldn't finish after missing the 40yd field goal.

Tough night running the football. The Patriots have been stopped for no gain or a loss a total of 8 times tonight:

Here's a look at a chart with similar numbers coming into tonight. pic.twitter.com/mFrMS0YSj5

With the offense unable to get much going, the defense made more big plays.

Kyle Van Noy returned a fumble 22 yards for a touchdown to push the Patriots lead back to 14 .

Most receptions in Patriots history:

With five minutes remaining, the offense put the game away when Tom Brady became the oldest quarterback to rush for two touchdowns in a game.

With that TD run Tom Brady becomes the first 42-year-old QB to run for two touchdowns in a game. Impressive.

At 42 years, 68 days old, Tom Brady is the oldest player to have multiple rush TD in a game in NFL history.

Stephon Gilmore has been targeted six times. He has an interception and four pass breakups. One of those PBUs led to John Simon's interception.

You are who you choose to be… #OnToNY

The Patriots have now won 11 consecutive games including the 2018 postseason. Their average margin of victory is more than 20 points in that span.

Brady’s Ladies in the house last night! Just missing you Julie, Maya, Jordan, and @gisele! We all reviewed film together for 3 hours after this…

What do you mean we don’t get to play until next Monday?

Three INTs, a fumble to the house AND just seven points allowed.

By: Steve Balestrieri
“I think they’re a 12-win team,” Ninkovich said on Greg Hill’s morning show. “Listen, six months ago I thought they were a nine-win team.
2 hours ago