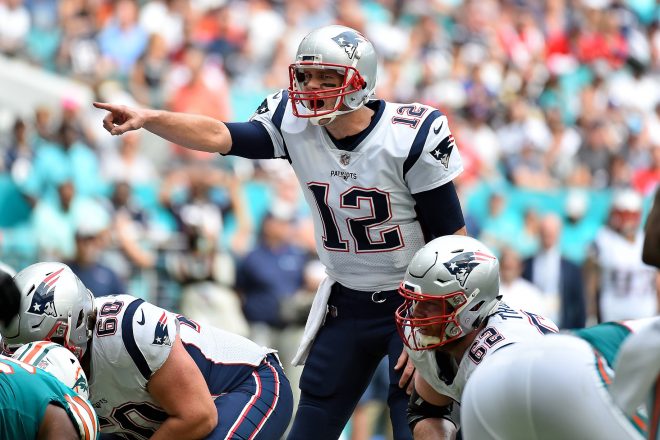 The Patriots head out on the road for the first time in 2019 as they travel to South Florida, to take on the Miami Dolphins. The Patriots are looking to get off to a 2-0 start and put behind them the slow starts that have earmarked earlier seasons.

This week’s game will be broadcast by CBS on Sunday, September 15 at 1:00 p.m. and can be seen locally on WBZ-TV Channel 4. Ian Eagle will handle play-by-play duties with Dan Fouts as the color analyst. Evan Washburn will work from the sidelines.. The game will also be aired on the Patriots flagship radio station 98.5 The Sports Hub with Bob Socci and Scott Zolak on the call, produced by Marc Capello.

The Patriots (1-0) are coming off a convincing 33-3 victory over the Pittsburgh Steelers on Sunday Tom Brady threw for 341 yards and three touchdowns.

The Patriots and Dolphins have been playing each other since 1966. Miami holds the overall edge 55-52 with each team holding a huge edge in home games. Miami is 38-16 at home against New England while the Patriots are 36-17 all-time at home against the Dolphins. Bill Belichick’s record versus Miami with the Patriots is 24-14. In games in Miami, Tom Brady is 7-10, and the team is just 1-5 in their last six games there.

The teams split last year’s contests with the Patriots blowing out Miami 38-7 at home and then losing 34-33 in December in the “Miracle in Miami” game.

The Patriots running game didn’t have a great game last week, but it wasn’t all bad either. The team ended up with 99 yards on the ground against a very good Pittsburgh front seven. They’ll be looking to get Sony Michel untracked this week as he was bottled up against the Steelers last week.

Miami was gashed badly by the Ravens in the opener to the tune of 265 yards and 5.8 yards per rushing attempt. They were overwhelmed at the point of attack and will be looking to do a much better job. They’ll need their big men up front, nose tackle Davon Godchaux, and ends John Jenkins and Christian Wilkins to be much better. If the Patriots big men in the middle, Ted Karras, Joe Thuney and Shaq Mason can get a push to the second level, the ground game will be successful.

Look for plenty of the two-back sets with Michel, Rex Burkhead, and James White rotating in with James Develin leading the way. It will be interesting to see if the team activates Damien Harris this week, as he was removed from the injury report and having Brandon Bolden limited with a hamstring issue.

The Patriots passing game looked really good passing for 374 yards in the opener against the Steelers. Tom Brady was sharp and was getting everyone involved in the passing game. The pass protection against the top team in sacks from 2018 held up quite well. Isaiah Wynn shined in his first game but the team lost Marcus Cannon to a shoulder injury in the second half. His absence will be a place to watch this week. The team did sign veteran tackle Marshall Newhouse this week.

The Dolphins pass defense was arguably more miserable than their run defense was last week. Lamar Jackson had a perfect passer rating and threw five touchdowns along with 324 yards passing. His backup RG III came in and was 6-6 for 55 yards with a touchdown. Ravens’ QBs were 23-26 for 378 yards with six TDs. The secondary has some good pieces there with Xavien Howard, Minkah Fitzpatrick, Reshad Jones, and Bobby McCain with a bunch of ex-Patriots, Eric Rowe, Johnson Bademosi, Jomal Wilz, and Ken Webster.

The Patriots running game should open up play-action passing in this one. Seeing how the Dolphins choose to match up with Josh Gordon, Phillip Dorsett, and Julian Edelman with White and Burkhead out of the backfield will be an interesting part of the chess match. Flores knows the Patriots weapons well and he’ll be trying to counter their moves. The pass rush for Miami is key here. If Brady has time to throw, he should light them up again. It is unknown right now whether Antonio Brown [on Wednesday evening] will play. It may depend on how much of the offense he can learn in practice this week.

The Dolphins rushing attack was put on the backburner early last week when they fell behind so far, so early. They have Kenyon Drake and Kalen Ballage toting the rock behind an offensive line with new pieces everywhere.

Jesse Davis was moved to left tackle from the right side. Michael Dieter and Daniel Kilgore at LG and C respectively are the only carryovers. Right guard Danny Isadora and right tackle Julien Davenport are both new and started last week after coming to Miami after the initial 53-man cutdown.

Although Drake has had success against the Patriots in the past, with this patchwork offensive line, it is tough to see Miami getting much going on the ground without them getting really creative here.

Miami has surprisingly gone with veteran Ryan Fitzpatrick in the early going after they brought in second-year QB Josh Rosen earlier this year. Fitzpatrick has the capability to get really hot for a few games, as we’ve seen in the past, but overall he’s 2-9 in his career with the Bills and Jets against the Patriots.

The skill players are good with DeVante Parker as their possession guy with Albert Wilson and Jakeem Grant as their outside guys with speed to burn. Tight Mike Gesicki will be someone to watch. But this offensive line will decide this matchup. Can they hold up?

The Patriots defense was outstanding against the Steelers, with the secondary of Stephon Gilmore, Jonathan Jones, and Jason McCourty taking away the outside threats. Look for Pat Chung to cover Gesicki and that will be a great matchup to watch.

The Patriots Stephen Gostkowski had a really solid game after an uneven preseason. He hit on all three extra points and all four field goal attempts. Jake Bailey hit one boomer and one dud last week. But his holds on the field goals were spot on, something they struggled with a bit in preseason. The coverage units were solid and Gunner Olszewski had a nice debut with punt returns of 20 and 15 yards.

Miami’s Jason Sanders booted a 54-yard field goal last week in one of the few bright spots of that game. Punter Matt Haack averaged 53.7 yards per punt. Their return game didn’t net much on the day.

Another year heading to the Patriots House of Horrors? New England is just 1-5 in their last six games in South Florida, including the past two. They always seem to save some of their worst football for games in South Florida. Can they turn that around and start the year off 2-0 and avoid the slow starts that have plagued the team in recent years?

Be Aggressive and Get After Fitzpatrick – Look for the Patriots defense to be aggressive and attack the Miami offensive line here, while they try to set the tone of this one from the outset. Fitzpatrick isn’t the most mobile of QBs and the OL hasn’t played together for very long. Show them different fronts [Amoeba look with one down lineman] bring pressure and try to generate some turnovers.

Jamie Collins, Michael Bennett, and rookie Chase Winovich are the players to watch here. They don’t want to lay back and allow Fitzpatrick to get into a rhythm. This secondary has shown it can play blanket coverage across the field, take advantage of it and force the issue.

Run the Ball to Open up Play Action: The Patriots running game is looking to get untracked this week and this is a perfect time and place to do so. Miami hasn’t sorted things out yet and the ground game can set the tone for this one early. Michel, Burkhead, and White should give them plenty of yardage to open things up in the passing game. With play-action, Brady will have more open room across the middle and allow him more time to hit Gordon and Dorsett on the perimeter. It will be interesting to see if they give rookie Jakobi Meyers more snaps this week. We’re not counting on Antonio Brown playing in this one, but we’ll have to see how that plays out.

Put Them Down Early: The Patriots have had a bad habit of letting the Dolphins hang around in games down in Miami and those have come back to haunt them. Sunday, they need to come out firing and put the Dolphins in the rearview mirror early. The confidence can’t be high there right now after last week’s debacle.

Bill Belichick needs to get the team coming out fired up like this is a playoff game and approach it in that way. A couple of quick scores early and have the Dolphins on their heels. They have done that at home against the Dolphins seemingly every game, it is time to do so down there.

So, a lot of Patriots fans and some media have been playing up the familiarity idea that the Dolphins’ coaches know the Patriots and their system and know exactly how to attack them. And they point, successfully at the Lions and Titans games from a year ago. And it is a valid point…to a degree.

But this New England team is a better one than took the field last year, and this Dolphins team is frankly, one that is going to struggle to win 3-4 games in 2019. The only thing holding the Patriots back this week is themselves. They should establish dominance early in this one. There won’t be any miracles this time.  Patriots 42-13

The “Knocking on Sevens’ Door” tour moves back to New England next week to take on the Jets.