3 years ago at 9:10 am ET
Follow @SteveB7SFG
Posted Under: 2019 Patriots Regular season 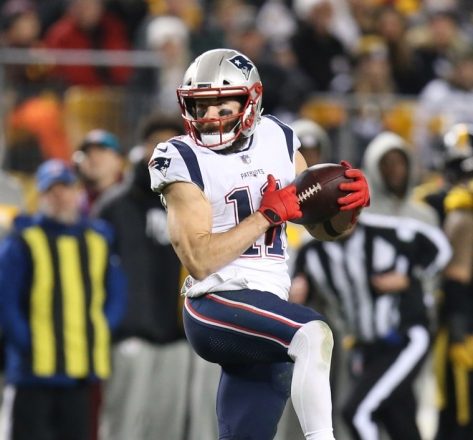 The Patriots begin their 2019 regular season with a very familiar foe as they take on the Pittsburgh Steelers at Gillette Stadium for the first Sunday Night Football broadcast of the year. Prior to kickoff, the team will unfurl their sixth Super Bowl banner as only the Patriots and Steelers have won as many Lombardi Trophies during the SB era.

This week’s game will be broadcast by NBC 10 in Boston. Al Michaels will handle the play-by-play with Cris Collinsworth doing the color commentary while Tracy Wolfson will work the sidelines. The game will also be aired on the Patriots flagship radio station 98.5 The Sports Hub with Bob Socci and Scott Zolak on the call, produced by Marc Capello.

The Patriots (11-5) are coming off last year’s Super Bowl win over the Rams after beating the Chargers at home in the divisional round and the Chiefs on the road in a dramatic overtime win.

The Steelers (9-6-1) had another late 4th quarter comeback and pulled off a dramatic 39-38 win over the Baltima disappointing 2018 where they missed the playoffs and finished second in the division to the Ravens.

The Patriots running game should be a key strength of the team moving forward in 2019, as they were fifth in the NFL in rushing a year ago. Sony Michel looked strong in his only preseason cameo and is backed up by James White, Rex Burkhead, Brandon Bolden, fullback James Develin and rookie Damien Harris. They have depth and versatility here to be very effective.

The offensive line took a big hit when center David Andrews was placed on IR with a blood clot in his lung. Ted Karras takes over and he’ll be a focal point in both the run game and in pass protection. Isaiah Wynn, last year’s top draft pick takes over at left tackle and will be playing in his first NFL game

The Steelers were stout against the run in 2018 finishing 6th best. It starts up front with Stephon Tuitt, Cameron Heyward, and Javon Hargrave who stop things at the point of attack which allows the linebackers to clean up and make plays.

Look for a lot of two-back sets as the Patriots will try to move the defense around and hit them with runs between the tackles. Michel, Burkhead, and Harris should see plenty of play here. Develin will play a key role as he may line up as a TE or H-back in some of the different formations.

The Patriots passing game on paper looks daunting for opponents to stop. Josh Gordon and Demaryius Thomas have traditionally given the Steelers trouble in the past. But those two and Julian Edelman had virtually no training camp reps and very little preseason action. Their timing with Tom Brady, may not be as crisp as they want on Sunday night. Phillip Dorsett was the only WR to get a lot of time working with Brady this summer. He may see a lot of snaps here.

James White, Burkhead, and Harris may see plenty of reps in the passing game as well. This was an area that the Patriots tried to attack during the December game last year. But the Steelers defended it well holding White, Burkhead, and Develin to 10 catches for 61 yards. They are better suited now to counter those moves with rookie Devin Bush and Mark Barron who they signed from the Rams.

The Steelers led the league with 52 sacks a year ago. They are more than capable of bringing pressure right up the middle which doesn’t allow Brady to step up and slide in the pocket. This will be a key area to watch. With Joe Haden and Steven Nelson at the corner, the Pittsburgh defense can play more man coverage than the Tampa 2 zones which Brady has traditionally eviscerated, especially in Foxboro.

The Steelers replaced Le’Veon Bell with James Conner a year ago and haven’t looked back. Conner rushed for 973 yards and a dozen touchdowns in essentially 12 games and gives the offense a nice weapon running and receiving. He’s back by Jaylen Samuels who roasted the Patriots for 142 yards on the ground last December. The Pittsburgh offensive line is outstanding and always presents a tough challenge.

The Patriots look much better prepared to stop the run this year. Danny Shelton had a very good summer. He, Lawrence Guy, and Adam Butler are the anchors inside. This allows the inside linebackers Elandon Roberts and thumper Ja’Whaun Bentley to clean up and make plays at or behind the line of scrimmage.

The Steelers were badly skewed in the run/pass ratio a year ago, running the ball on just 33.4 percent of the time while passing 66.6 percent. So, stopping the run early will be a priority and then forcing them into a more predictable pattern.

Ben Roethlisberger lost one of the more talented wide receivers in the league in Antonio Brown and although he may not admit it, he is probably happier for it. Brown has immense talent, he’s also an immense pain in the ass. His on-field production will be missed but the Steelers have a knack at developing quality WRs.

JuJu Smith-Schuster is the team’s go-to guy, he had 1426 yards a year ago. He’s backed by Donte Moncrief, who is now their #2, James Washington, Ryan Switzer, TE Vance McDonald as well as Samuels and Conner out of the backfield. And they drafted Diontae Johnson in this spring’s draft.

The Patriots have plenty of cornerbacks in Stephon Gilmore, Jason McCourty, J.C. Jackson, Jonathan Jones, and rookie Joejuan Williams. It will be interesting to see who they match up with Smith-Schuster [Gilmore seems to be favorite], but we’ve seen in the past where they’ll put their 2nd corner on the top WR with safety help and then try to take away the #2 with their best coverage man.

The Patriots pass rush, which was outstanding this summer is key here. They can’t allow Roethlisberger to extend plays and hit secondary targets down the field. But that offensive line won’t be an easy nut to crack.

The kickers for both teams Stephen Gostkowski for New England and Chris Boswell for the Steelers had their issues a year ago. Gostkowski had some misses in the preseason which may have been an issue with going to a new holder, rookie punter Jake Bailey.

But Gostkowski is very solid and at home gives the Patriots the edge in the kicking game. It is going to be intriguing to watch Bailey in his first NFL action. He has a tremendous leg and can flip field position which is the reason he was brought here.

The return game will feature Ryan Switzer for the Steelers while it isn’t clear if Julian Edelman or rookie Gunner Olszewski will handle punt returns for the Patriots. The UDFA looked good enough to carve out a role for himself this summer.

Another year, another Patriots-Steelers classic. Both teams want to start the season well, something even more important to Pittsburgh as they’ve traditionally been slow starters under Mike Tomlin. The Patriots too have started slowly in September.

The first games of the season are always the hardest to get a feel for as no one really knows how all the pieces are going to fit together once the rubber hits the road.

Run the Ball Effectively, Especially Early: The Patriots are going to lean on the ground game and with the passing attack trying to find their feet, it is especially true early this season. The offense has to get into third and manageable situations in this game. Pittsburgh’s defense has a lot of speed and can get after the QB. Third and long situations play right into their ability to get after it.

Therefore, Michel and Burkhead will be key players to watch in this one. If they can keep the chains moving and the defense on the field, it will slow the pass rush and possibly wear them down in the second half where conditioning may play a part. No one has played an entire game during the preseason. Then the passing game may start having more success with Brady having more time to throw. Pre-snap penalties? Last year in Pittsburgh, they had far too many…can’t have it.

Third Down Defense is Key This Week: The Patriots are going to try to take away Smith-Schuster and force Ben Roethlisberger to look elsewhere. Last year they did a pretty fair job of it, holding him to four catches for 40 yards. But with Moncrief, Washington [who had a solid game a year ago], Switzer et.al. they have a lot of weapons to bear.

Two players to watch in this one are Vance McDonald and Samuels. It would easy to see both of them becoming very valuable third-down targets this year with Brown gone. And consequently, it will be important for the Patriots to play solidly on third down and get off the field.

Jamie Collins is a key player to watch this week. The Patriots brought him back this spring and he’s got the ability to be a huge chess piece that they can move around and influence the play.

Finish Drives: Against the Steelers last year, the Patriots had plenty of opportunities to put points on the board and failed to do so. After a horribly blown coverage which resulted in a way too easy and early Chris Hogan touchdown, they managed three points the rest of the way.

Finishing drives is always important but especially against this team, as you don’t want to be playing from behind with their pass rush. Brady and Josh McDaniels will have to use the big men Gordon and Thomas [if he plays], down in the red zone to take some of the routes that Gronk ran in the past.

This one won’t be as high scoring as some people think, both teams may not be executing at the level that they will later on down the road. The Steelers may have an adjustment of their own for a bit with no Brown on the field. It should be another excellent football game between two of the best teams in the past decade. The Patriots are dropping banner #6 and hold serve at home. Patriots 24-21