3 years ago at 7:30 am ET
Follow @SteveB7SFG
Posted Under: NFL Commentary 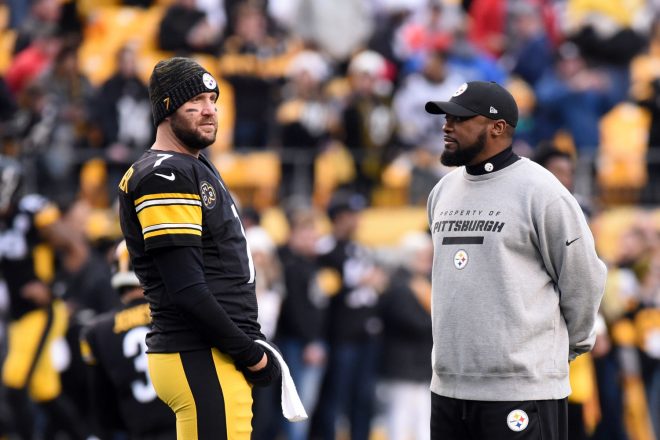 The NFL regular season is back. The 2019 NFL season is finally here. This is the first meaningful game for New England since the Patriots – Rams Super Bowl. Every year we begin the week with a quick overview of the Patriots opponent and this year will be no different.

The Patriots 2019 season begins with a very familiar foe coming to Foxboro. Although the Pittsburgh Steelers reside in the AFC North, it seems like a date with Pittsburgh is slated for every year, to where the two teams are now almost in the realm of divisional opponents. With both teams being annual front-runners to represent the AFC in the Super Bowl, this one will begin with the Patriots unfurling their sixth Super Bowl banner, and the only other team to have six? The Steelers.

Last year, the Steelers rode a tremendous defensive effort and the running of Jaylen Samuels, who roasted New England’s defense for 142 yards on 19 carries to down the Patriots 17-10. That was the last game that the Patriots lost, winning their final two regular-season games against Buffalo and the Jets and then winning all three playoff contests to nail down Super Bowl LIII.

So, here are our first impressions of the Steelers of 2019:

JuJu Smith-Schuster is the Unquestioned “Go-To Guy” in the Steelers Offense:

Antonio Brown is now a Raider and LaVeon Bell is a member of the Jets. While many were predicting the demise of the Steelers’ offense with those two gone, it may end up being addition by subtraction. This summer, the Steelers training camp was all about football and none of the drama that surrounded them in recent years.

Smith-Schuster capped off a fantastic season in 2018 with 111 catches for 1426 yards and seven touchdowns. He has developed a fantastic rapport with Ben Roethlisberger and is now clearly the top receiver on the team. He received gushing praise from Bill Belichick before the game last season that was entirely warranted.

He and Roethlisberger can work the short or deep game depending on how the defense is lining up and he’s primed to be even better in 2019. If there is any slight concern for this season, it is without Brown on the field, Smith-Schuster should now be facing the top corners for each team. While it may make his job a little bit harder, it makes the matchups that much more intriguing.

Lining up mainly against rookie J.C. Jackson last year, the Patriots did a good job of holding him in check [4 catches for 40 yards on 10 targets], this year, it will be intriguing to see who the Patriots matchup with Smith-Schuster. Stephon Gilmore would be the obvious choice but with James Washington, Donte Moncrief, slot receiver Ryan Switzer, and Diontae Johnson, Pittsburgh has a tremendous amount of speed outside.

Look for More Balance This Year in Pittsburgh’s Offense:

With Bell now far in the rear-view mirror, the running game is now the sole responsibility of James Conner. Conner had a very solid 2018, appearing in 13 games with 12 starts and carried the ball 271 times for 973 yards [4.5 yard average per run] with 12 touchdowns. He was also targeted 71 times in the passing game and caught 55 for 497 yards and another touchdown. He missed the Patriots game but the Steelers, as we mentioned above gashed the run defense with Samuels.

The Steelers had the worst run/pass ratio in the league last year, throwing the ball on 66.6 percent of the plays and running just 33.4 percent of the offense plays. One of the things they look to do this season is to mix things up and run the ball a bit more to keep opposing defenses off balance. And Conner, entering his third season is primed to make that happen with little loss of offensive production. If anything, it should improve their offensive efficiency.

Conner while not a burner, has shown to be explosive, averaging a 20-yard run in every 24 carries and very reliable in the red zone. While Bell held out for a big dollar contract with the Jets, it was still less than what the Steelers had offered him. But in his last four years with the Steelers, Bell had 19 touchdowns. Conner had 12 last year alone.

Devin Bush and Mark Barron Are Transforming the Middle of the Defense:

The middle of the field has been the kryptonite for the Steelers defense since Ryan Shazier was injured. But the Steelers addressed this area of their defense this spring. They picked up Mark Barron in free agency from the Rams, the 29-year old hybrid linebacker/safety is undersized but very athletic and can cover in sub-packages The Steelers gave him a two-year contract worth $12 million dollars. Then they moved up in the draft and selected Devin Bush, the linebacker from Michigan with the 10th pick in this year’s NFL Draft.

Bush has impressed the man the Steelers were looking to replace in Shazier, who was severely injured in 2017. “You’ve seen the way he plays. He had 10 tackles in the first half (against the Buccaneers). Sometimes it’s hard for people to get 10 tackles in two games,” Shazier said.

“I think he’s going to make a lot of splash for us. He’s going to be a big-time player for us. I don’t want to put too many expectations on him but I know one of his goals is to win defensive MVP, and I want to do whatever I can to help him out. I think he’s not gonna be that far away from it. I think he’s gonna have a great year.”

They also added FA Steven Nelson from the Chiefs who should be an upgrade from Coty Sensabaugh and Artie Burns.

Having these playmakers on defense should help the one area that the defense really struggled with…turnovers. For a team that led the league in sacks, the secondary had only eight interceptions. Usually, those two things go hand in hand. But in 2018, they didn’t. By adding those two in the middle of the defense, look for Pittsburgh to force more picks this year.

With the loss of solid tight end Jesse James in free agency this year, [we were calling for the Patriots to show interest there], the Steelers aren’t deep at TE, but in Vance McDonald, the Steelers have a very good option to attack the middle of the field and get more looks in the offense now that Antonio Brown is in Oakland.

McDonald had 50 catches last year, good for 610 yards and four touchdowns. He’s backed by blocking tight end Xavier Grimble and rookie Zach Gentry who the team picked up in the 5th round of the 2019 NFL Draft with the 141st overall pick.

McDonald and Jaylen Samuels should see a big uptick in third-down snaps this year with plenty of opportunities to increase their productivity this season. I’d look for both to get lots of looks from Roethlisberger, starting on Sunday night.

Tuzar Skipper is the Steelers Feel Good Story of the Summer:

This summer Patriots fans got behind the efforts of UDFA Gunner Olszewski, a defensive back from tiny Div.II Bemidji State who they turned into a WR/KR. Pittsburgh fans were treated to a similar story. Tuzar Skipper was a UDFA from Toledo who went for a tryout with the Kansas City Chiefs but was turned away. The Steelers invited him to tryout at their rookie minicamp and signed him to their 90-man offseason roster.

He came into training camp at the very bottom of the depth chart but consistently impressed the coaches every day with solid play, which should also sound familiar. In his first preseason game, he registered a sack of the QB against the Buccaneers. Against the Chiefs, he added another. He finished the preseason with 5 sacks, the most in the league.

Skipper leapfrogged several players and has earned a spot on the 53-man roster. And like Olszewski with the Patriots, he’s quickly become a fan favorite of the Steelers faithful.