3 years ago at 7:30 am ET
Follow @SteveB7SFG
Posted Under: Patriots Commentary 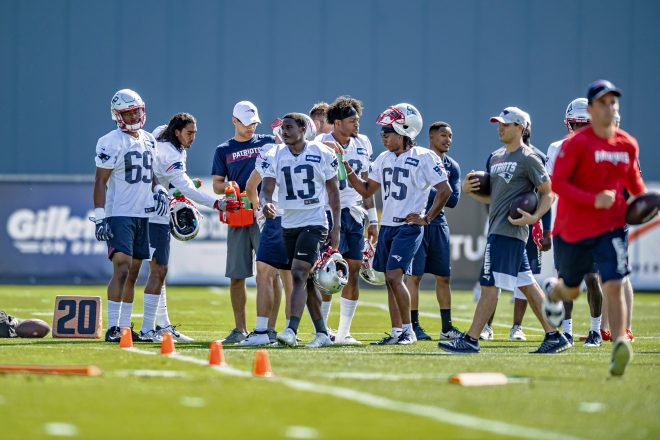 With the Patriots now halfway thru their preseason slate, we’re going to take stock of the roster once again and take a stab at predicting a 53-man roster projection. The preseason games in Detroit and Nashville along with several joint practices conducted with both teams have given the coaches much more information and play against an opponent to evaluate.

What is different about this particular projection is that several established veterans may now find themselves on the roster bubble as the coaches now find that the depth of this roster will make them face some really difficult decisions moving forward.

No changes here. The Patriots could feel that Stidham can handle the backup duties for Brady, much like they did in 2009 when Brady was returning from his ACL injury and Brian Hoyer was a rookie backup. But Hoyer’s value lies in his experience, he is a sounding board for Brady and does a valuable and underrated job of running the scout team offense during the practice week. This could change, but for now we’re sticking with three QBs.

A big change this time around. Develin could be lumped in with the tight ends but regardless of where he is, he’s not going anywhere. The Patriots are deep here and after the game in Nashville, Harris showed his versatility of being able to run the ball and made five catches out of the backfield. Something he shares with Burkhead.

Could the increased versatility of Michel and now Harris, plus the return of Gordon mean that the Patriots cut Burkhead? Due to the depth and decisions, they have to make on the other side of the ball, [see more below], some very tough decisions will have to be made, and this one won’t be easy. Watch who is playing late in preseason games 3-4 and we may have our answer

Brosette has played well in limited action and lands on the practice squad. Johnson got a number of reps in Nashville who is automatically granted an extra spot on the PS due to his NFL International status

This all depends on how serious LaCosse’s injury situation is. If he’s going to be out for a while, this could open the door for one of the other veterans to step in. LaCosse has had a solid summer. Izzo is a good inline blocker, remember he made the 53-man roster last year before landing on IR.

Edelman, Harry, and Gordon project to be the top three. Gordon’s reinstatement puts him right smack on the roster in a lock status. They know his value.

Meyers has been extremely impressive all summer and is now a lock. Harris was having a terrific spring/summer but he got injured and Tom E. Curran from NBC Sports Boston has reported he could be out “for a while”. So this is where the Pats will place him on IR with the possibility of returning later this season. Dorsett is injured as well. His position seems a bit unsure right now as well.

Berrios goes from out in our last projection to making the roster by virtue of his ability to return kicks and punts. Although they could tag Dorsett/Bolden for that. Thomas, although seen running full speed this week, along with Meredith begins the year on PUP.  With Gordon’s addition, the team will have to carry an extra wide receiver to protect themselves in the event that Gordon’s inner demons resurface.

Wynn’s return to action and his performance in the game against the Titans has to be a big relief for the coaching staff. The team keeps Skipper as the swing tackle for now as Cajuste gets a red-shirt IR year. Froholdt and Ferentz battle it out for the final backup spot. But the team could opt for keeping just seven OL as they did at cut-down time a year ago.

Rivers makes the cut this time around after very solid play this summer with a big caveat. He was hurt and helped off the field in Nashville. The severity of his injury may come into play here. Hopefully, he’s not injured badly this time around.

Winovich has been very impressive this summer, Bennett, Simon, and Wise are established veterans. Harris has played well as a sub-rusher and could sneak in if Rivers is hurt more seriously.

No changes. Guy and Pennel should be the Week 1 starting combination inside. Shelton returns, as the backup nose tackle. Guy and Butler offer versatility in either inside DL in a 4-3 or as 3-4 DEs playing a five-technique. This is a solid group and Mike Pennel should be an immediate early downs producer. Cowart is playing really well and although pushing for a roster spot will end up on the practice squad.

Big changes here, once again difficult decisions force the team to part ways with Roberts and King who is a special teams ace. Sam and Munson have looked good in limited availability but are victims of the numbers crunch. Calhoun has gotten better all summer long and brings good pressure off the edge.

Another area where changes are made. Gilmore, McCourty, and Jackson give the team three very good outside corners. Jones has clearly outperformed Dawson and will handle the slot. Williams has really come on and has played very well in the past few weeks.

Will the Patriots cut ties with a 2nd round player [Dawson] who has never played a down? Unfortunately, that is the case.

Ebner is back and edges out King for the STs slot. Toughest cut here is Melifonwu who has played well all summer long. The top three are locked in and Brooks has gotten a lot of work with the top unit.

No changes here. Gostkowski and  Cardona faced no camp competition, although Gostkowski has missed kicks in consecutive games. Bailey has a huge leg and also can kickoff, he still gets the edge over the established solid veteran in Allen, who won’t be unemployed for long. Slater is tremendous as the Patriots gunner.

By: Robert Alvarez
The best social media postings in response to the news of Tom Brady's retirement from the NFL after 23 seasons.
5 mins ago