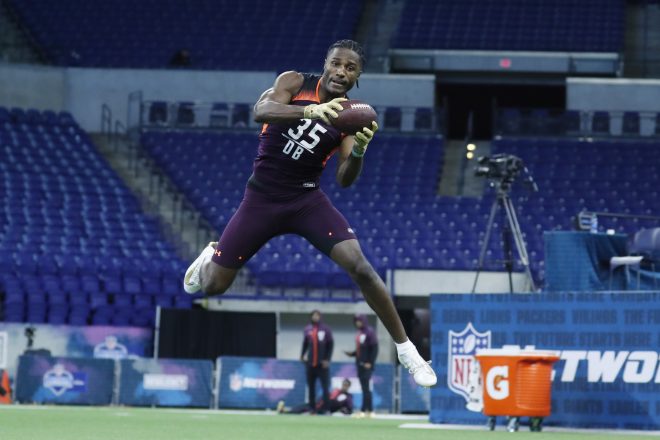 As night two of the 2019 NFL Draft continued Friday night, Bill Belichick and the Patriots turned to the defensive side of the football with their first pick of the evening, which included a trade to go up and get him.

New England made a trade with the Rams to move up from the 56th overall slot to 45th overall in order to take Vanderbilt cornerback Joejuan Williams. They reportedly gave up their 56th pick and a 3rd round selection (101st overall) in the transaction.

It was a good move for the Patriots, who add another big defensive back to their secondary alongside standout Stephon Gilmore. Williams is 6’3″, 210-pounds and is a guy who was projected as an early round pick but slid after a not so impressive NFL Combine performance where he ran twice in the 4.6 range. But he’s a player who scouts say has a good ball skills and that type of height allows the Patriots to have a player who can deal with opposing team’s taller offensive skill players.

Williams finished last season with 14 pass breakups, which was an SEC-high. His addition is a nice infusion of youth into a secondary that now has a player who can develop into a role alongside Gilmore, Jason McCourty and Jonathan Jones, along with up and coming players like J.C. Jackson and potentially Duke Dawson.

But his length is something that’s rare, with Bill Belichick actually recently discussing the importance of having a player to deal with the bigger receivers in the league, which he pointed out are becoming more common these days.

“Usually you sit there at the end of the year and say, well, we had a lot of trouble blocking this player or defending this type of player or whatever it is, and then that kind of becomes a need for you,” said Belichick earlier this month. “Either we have to change our scheme to do this, which probably isn’t that easy or you would have already done it, or we have to have another certain type of player on our roster that we don’t currently have that has a certain type of skillset. So, this is another year where there’s a lot of big receivers – 6-4, 225, 230, whatever they are – I mean, somebody’s going to have to cover those guys one of these days. I don’t know if it’s all going to be this year or not, and there’s plenty of them in the league right now that fall into that category.”

After the pick of Williams, he hopefully now has that player.

Meanwhile, the Patriots traded down their next pick in round two, sending away pick 64 to Seattle for the Seahawks 77th overall pick and the 118th selection.  Their next pick, barring another trade, will come at #73 overall in the third round.  The Patriots have three selections in round 3, picking at 73rd, 77th and 97th overall.

How Was This Article?
Posted Under: 2019 Patriots Draft