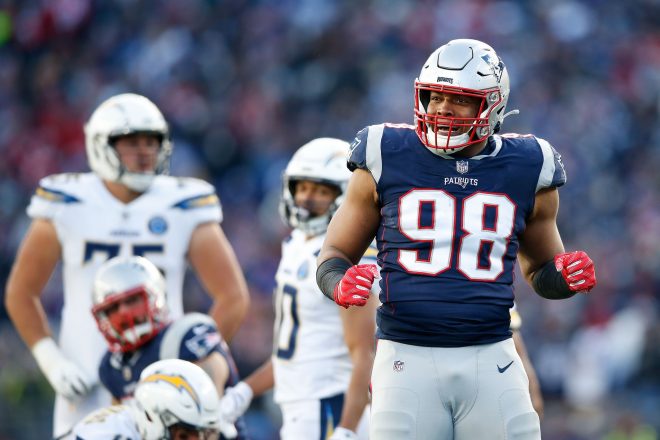 Which of the Patriots Free Agents Return in 2019?

The Patriots are facing a ton of potential turnover in their roster in the upcoming 2019 season and to go along with a slew of coaching changes, it presents a difficult challenge in the days ahead.

Most Super Bowl winners suffer a turnover of more than 20 players from the Super Bowl to Week 1 of the following NFL season. This year’s Patriot team will no doubt be any different.

So, now that the post-Super Bowl celebrations are over and we’ve had a chance to let the dust settle, we are going to take a look at some of the Patriots free agents and try to get a feel on who may return and who may be moving on. And let’s start with the two biggest of them.

The Patriots defensive end was a fourth-round pick from Arkansas just four years ago and at 25 is just now entering the prime of his career. Flowers led the team in sacks the past three years but he’s much more than just a sack specialist.

In the varied scheme that the Patriots run on defense, they ask their edge players to do a lot of different things. And Flowers can do them all. He sets the edge, rushes the passer from the outside, can kick inside as an interior pass rusher and drop occasionally into the passing lanes in the flat.

Flowers has arguably been the Patriots’ best defensive player for the past several years and they know and appreciate his value. How will the rest of the league value Flowers? In an increasing fantasy football mindset, many fans and writers may not believe that he’s a top-tier defensive player. But the coaches see what he brings, especially two ex-New England coaches in Detroit and Miami.

The chances of Flowers returning are probably less than 50/50, and if they can’t get anything done by the time the signing frenzy begins, it will probably be less than that. Flowers would look awful in teal…

My, my, my, (Joe Kenda voice), what a difference a year makes. When the Patriots got Brown in a trade with the 49ers there were a lot of very unconvinced people (including right here) that wondered why the Niners would let him go if he was as good as Von Miller proclaimed him to be.

Miller, the Broncos pass rush specialist, called Brown the best right tackles in the NFL and considered him one of the best tackles …period. Brown is absolutely enormous at 6’8, 380-pounds but for a man so big, he moves incredibly well. He took over the starting left tackle position in the first days of training camp and never looked back.

He started all 16 regular season games and all three playoff games and was simply outstanding. So, yes… he can play left tackle in the NFL, and do so at an elite level. Having feet as quick as his for such a large man allows him to keep pass rushers at bay and he can be a road grader in the running game.

Will another team throw a boatload of money at his feet this spring? With the protection of QBs blindsides always at a premium, the answer is probably yes. Will the Patriots match? Probably not. They invested their top pick last year in Isaiah Wynn who ended up on IR with a torn Achilles last year. Marcus Cannon is under contract for the next three years. The Patriots believe Wynn is more than capable, however, they’ll want to take him along slowly with his injury.

If the Patriots do re-sign Brown, then swing tackle LaAdrian Waddle will probably go, if not he’ll return for another year. The chances of Brown returning are far less than 50 percent in 2019.

Both of the Patriots kicking tandem are free agents this season. Gostkowski has been with the Patriots since Adam Vinatieri left in 2006, (the Patriots have essentially had two kickers since 1995), and Gostkowski has been remarkably consistent for a very long time. Last season he was 27-32 on FG attempts, three of his misses were beyond 50 yards and 49-50 on extra points. His work on kickoffs is a subject that Bill Belichick has long complimented on as exemplary.

Allen has been outstanding at angling punts to the sidelines and dropping them inside the 20-yard line of opponents. During the Super Bowl, he pinned the Rams deep three times inside their 10-yard line. And don’t forget, it is Allen that does the holding on all of the extra points and field goals.

Both are extremely valuable and trusted. The odds of each returning is well over 50 percent for 2019.

J-Mac was a very valuable contributor in 2018, his solid play, experience, and leadership were all key factors in the team’s success in the secondary. And playing in the playoffs for the first time in his career, was an experience that McCourty relished, a valuable teaching point to the younger players to never take anything for granted. Especially for a player who went from 0-16 to a Super Bowl win.

The Patriots have a lot of depth at the cornerback position with Stephon Gilmore, J.C. Jackson, Jonathan Jones (RFA), Duke Dawson, Keion Crossen and Eric Rowe (UFA). McCourty’s veteran presence would be very valuable in 2019, but much of his future may be tied into his brother’s retirement consideration. If Devin decides to return for one more year, Jason would be much more inclined to remain. He’s a 50/50 proposition to return.

The Patriots three complementary wide receivers are all unrestricted free agents this spring. Hogan has spent the past three seasons here after signing a three-year deal bringing him over from Buffalo. Hogan was a key contributor on the two Super Bowl teams his first two seasons but this year, he seemed to be frozen out of the offense, where he was forgotten for very long stretches. A classy vet, on and off the field. He’s a great teammate who works hard every day and can be a valuable complementary piece in any offense.

Dorsett seemed primed to have a nice role in the offense after a really strong training camp. But when the team signed Josh Gordon, he saw his playing time slashed. However, when his number was called, he contributed some big plays, most notably the touchdown pass in KC during the conference championship game right before the half. He never lived up to his first-round draft pick expectations but can be a nice role player.

Patterson remains one of the premier kick returners in the game and the opening kickoff in the Super Bowl showed how dynamic he can be, nearly breaking it for a TD. The Patriots installed a package on offense to take advantage of his blazing speed and he chipped in with three receiving touchdowns. He also jumped into the mix at running back when injuries piled up at mid-season and acquitted himself pretty well there. That concept of doing whatever the team needs you to do wasn’t lost on the coaching staff.

The belief here is that Hogan is gone and Dorsett is slightly less than 50 percent to be returning, probably looking for a spot that will allow him more playing time. Patterson seemed to really like it here and if the Patriots offer him anything close to what he gets on the open market, then his chances of returning are better than 50 percent.

The two big men in the middle both had the team decline fifth-year options for each in 2019 which says that they are prepared to move away from either or both unless the money is right. Brown had a good but unspectacular 2018 season and like his previous four years, had bouts of inconsistency. He was much better down the stretch and into the playoffs. But in truth, he never really lived up to his first-round draft expectations.

The Patriots picked up Shelton from the Browns last spring and he too was plagued by consistency problems. He was a healthy scratch for three late-season games including the AFC Championship Game but was active and very good in Super Bowl LIII.

The belief here is that the team could easily bring one of the two back on a team-friendly deal, but the chances that either return are under 50 percent.

The Patriots love their special teams’ guys and in a year when the normally stellar STs units were struggling with their consistency early in the year, they brought these three into to the fold to steady the boat.

Simon proved to be a valuable role player on the defense first and STs second. He did a very good job when called upon in setting the edge and getting after the passer as well as dropping into coverage. In the sub-packages the team runs, he provided a valuable role and fit in well.

McClellan was an outstanding addition to the STs and blocked a couple of kicks, forced a key fumble. But in the punt coverage teams? Before McClellan’s arrival, the team was allowing nearly 13 yards per punt return. After he came on board, it was cut in half. That isn’t a coincidence.

Humber is another STs maven and he’s terrific on kick coverage and recovered a blocked punt. The chances of these three returning are better than 50 percent, it would be nice to see the team re-sign all three this spring.