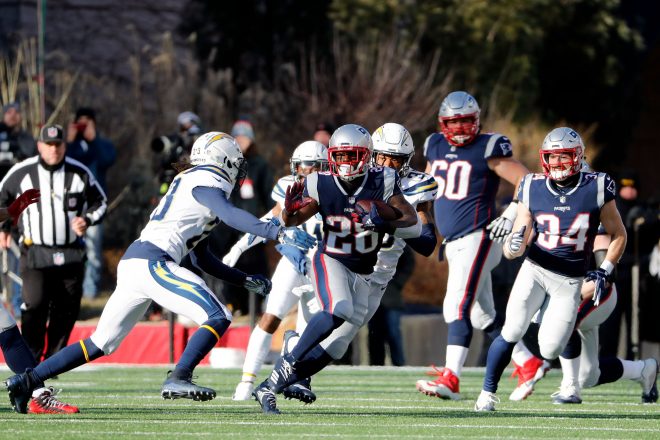 The Patriots are leaving on Sunday to take part in their third Super Bowl in a row and their fourth in the past five seasons. While much of the talk and deservedly so centers around the relationship of Head Coach Bill Belichick and QB Tom Brady who are competing in their ninth Super Bowl together, one other player will be critical to the Patriots success next Sunday. Running back James White.

It is a given that if you took a poll of the best running backs in the NFL, White wouldn’t sniff the top 15 or possibly even further. But in this Patriots offense, White’s role is such that he can be the mismatch that the coaches are looking for to ignite the rest of the offense. White doesn’t carry the ball much in the running game. They have rookie Sony Michel and veteran Rex Burkhead to handle the majority of those duties.

No, White’s value in mostly in the passing game where he is simply outstanding. That’s why he’s our “X-Factor” in the Patriots offense next week in Atlanta. The Rams have struggled to cover running backs out of the backfield and tight ends all season. And the Patriots will be looking to continue that trend next week.

And in 2018  White has been terrific. He’s averaging 6.5 yards per every touch he gets either in the passing or running game. That is 2nd best in the entire NFL. He averages about 47 yards per game receiving, which was 3rd best.

White is a movable chess piece. Often Tom Brady will put him in motion to find not only a mismatch against a linebacker but will often get the defense to declare what coverage they are in. And when the lights are the brightest, that’s when White shines the most. In the Super Bowl two years ago against the Falcons, he was immense. He carried the ball six times for 29 yards, (4.8 yards per rush) and two touchdowns, including the game winner in overtime. In the passing game, White was even better catching 14 passes for 110 yards and another touchdown.

In White’s career he’s played in 10 postseason games, he has 33 carries for 128 yards but with five touchdowns. And he’s caught 53 passes for 439 yards and three more scores. A total of eight touchdowns in 10 games.

This year, it has been more of the same. In the Patriots two playoff victories over the Chargers and Chiefs, White has caught 19 passes for 146 yards. Against the Chiefs, we looked at the box score after the game and were frankly amazed that his numbers didn’t jump off the charts. Six carries for 23 yards and four catches for 49 more.

While watching the NFC Championship Game, RB Alvin Kamara was a matchup nightmare for the Rams defense gaining 96 yards on 11 catches. No doubt Brady and Josh McDaniels watched that tape too.

The Patriots have a deep and diverse backfield of Sony Michel,  Rex Burkhead and White. Michel is the workhorse in the running game while White is the go-to player in the passing game. But Burkhead can do a little bit of both quite well and it just makes the defense’s job that much harder.

White was raised by a talented athlete in his father who became a law enforcement officer as well as his coach. And the elder White taught his sons about committment, teamwork and hard work. He was thrilled when James was drafted by the Patriots and Bill Belichick in the 4th round of the 2014 NFL Draft.

“He’s a great kid,” said Belichick. “He’s smart, he works hard, very tough, dependable, his ball security, his decision-making, situational football — I mean, he is one of those guys that almost always does the right thing. Sometimes things come up that aren’t exactly the way they were practiced or doesn’t exactly follow the rule that you’ve outlined, but he has to make a decision quickly, whatever the circumstances or situation is, and he almost always makes the right one. Some of that’s just instinctive and good judgment on his part that’s, I’d say, beyond coaching.”

The Patriots will be looking for Super Bowl win #6 against the Rams next week and White will be a big part of the offensive game plan. It will be interesting to see how the Rams decide to cover him. In the current postseason, White leads the all NFL backs with 2.81-yard average for every route run.

White isn’t quotable, he’s humble, down-to-earth and takes nothing for granted. He’s always prepared and has the utmost confidence from Brady in the offense.

He has “Only the Strong Survive” tattooed on his chest, and that is fitting. Because when the chips are on the line in the Super Bowl, Brady and the Patriots won’t hesitate to call White’s number.