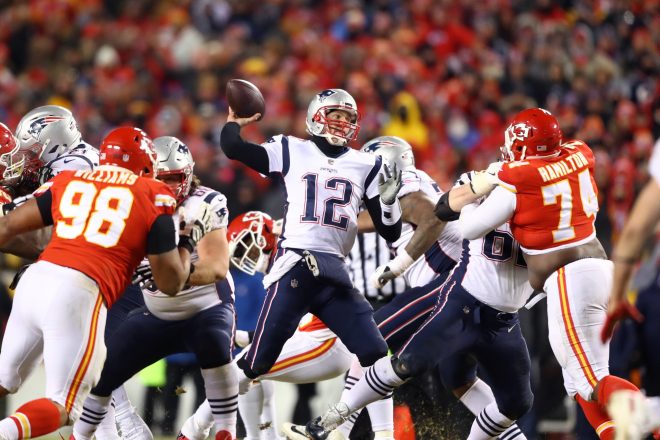 Patriots players are used to the motto “ignore the noise” and there certainly is plenty of it out there following New England’s terrific overtime AFC Championship win over the Chiefs Sunday night.

One of the frustrating parts of Sunday’s game for Chiefs fans was the fact Patrick Mahomes was nothing more than a spectator during the overtime period, which saw Tom Brady march down the field and drive the dagger into their hearts with a walk-off touchdown drive.

That moment silenced the fans who had screamed their lungs out all night, with those who were still on hand forced to watch the Patriots celebrate on their home field as the Chiefs’ fairy-tale season came to an end.

It was a tough Monday.  They’re trying to grapple with the reality that any shot they had for a magical finish is over, which now sees them rooting against the Patriots with a vengeance alongside a Rams fanbase that will need all the help they can get after even their own supporters didn’t show up in force to cheer them on against the Cowboys two weeks ago.

Sunday’s loss is a gut punch, we know, we’ve been there.  You grasp at straws and intermittently even forget that there’s no time machine to bring the game back to a moment where they can possibly do it over and erase what just happened.

With Kansas City not touching the football in overtime, they’re upset that things came down to a coin flip, believing the sudden death rule of scoring a touchdown should be changed.  Many throughout the national media believe the same, with quite a few talking heads also hoping that that rule gets some consideration this offseason.

Just think, if the Chiefs had won, we wouldn’t be having this conversation. Fans in New England would instead be evaluating all the plays they didn’t make and the missed opportunities.  Those would be the topics of conversation.  We’d be talking about the interception in the end zone in the second quarter that destroyed a key scoring opportunity for the Patriots, which played a part in allowing the Chiefs to get back into it.  We’d be talking about the missed fourth down conversions.  You know, things like that.

But the Patriots came out on top, so let’s skip things like logic and reason and let the “unfairness” begin.

It’s ridiculous.  They’re trying to make the argument (and they’re wrong) that the Chiefs should have gotten one more chance after squandering countless others all night to match New England’s touchdown.  However, when you have a defense who can’t stop anyone and a quarterback who was the real reason the Chiefs got as far as they did, you tend to freak out and join all the other opposing fans around the league and start beating the drum for a rule change.

Disagree?  Well, all you need to do is take one key factor into consideration and realize that what happened to close this one out is the reason why the NFL already made the right call when they decided to force teams to have to score a touchdown to win the game instead of a field goal to begin with.

In order to win this football game, the Patriots had to put together their second-longest drive of the night, with Brady forced to dig deep one last time and put together a 13-play sequence in order to punch it in for the game-winner.  They also had to convert three 3rd-and-10s along the way, each of which required precision throws and terrific plays by Julian Edelman and Rob Gronkowski to keep it going, with the Chiefs giving up plays of 20, 15 and 15 yards respectively.

It’s really simple.  When you give up plays of 15+ three times on third down in overtime, you deserve to lose.  That would be the narrative if the roles were reversed and Patriots fans know that better than anyone given past experience.

In the meantime, that won’t stop anyone from complaining about the outcome and the rule in place they feel took away their shot.  Maybe they can spend the offseason watching the film and realizing there were bigger reasons why they lost the game.   Maybe they’ll realize that had Kansas City managed to put up a single point with their high-powered offense in the first half, things might have turned out differently.

Sunday night saw the Chiefs put together just two drives of more than five plays, relying on big plays to help put them in position to score.  On the other side, the Patriots offense consistently sustained drives, with 7 of their 12 drives lasting 8 plays or more, including four that went for 10+ as they ate up the clock and kept the football out of Mahomes’ hands.

Holding onto the football requires precision and execution to move the ball down the field and keep the chains moving. Sony Michel, who rushed for 113-yards on the night against the Chiefs defense, credited the Patriots offensive line for allowing them to put those drives together and set the tone early.

“We just went out there and executed our game plan,” said Michel after the game. “Guys did their jobs and it helped us drive the ball down the field. That’s what we needed. We needed a fast start and they kind of helped us.”

Meanwhile, despite Kansas City’s 24-point fourth quarter, New England held the ball for 11:47 compared to just 3:13 for the Chiefs.  While the Chiefs eventually made some big plays down the stretch, as explosive as they were, it came down to execution as the reason the Patriots came out on top.

Chiefs linebacker Dee Ford admitted as much after the game.

“They executed, and we didn’t at the end of the day,” said Ford. “Execution trumps everything, especially in overtime being what’s at stake at this time of the year.”

Good teams find a way to win in big moments.  Give the Chiefs credit, they forced this one to come down to the wire and gave the Patriots all they could handle.  Fortunately, Brady and the offense maintained their poise and executed at a championship level, especially when it mattered most.

And as much as it might hurt all the Patriots haters to admit, that, not the overtime rule, is the real reason why the Patriots are moving on to Atlanta.