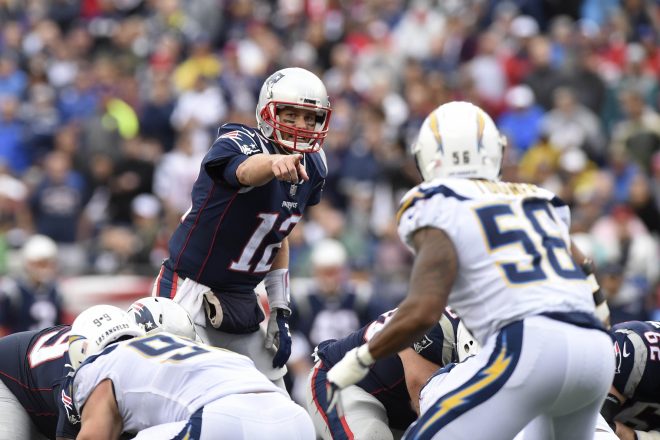 Patriots-Chargers Key Matchups, Who Has the Razor’s Edge?

The New England Patriots take on the Los Angeles Chargers at Gillette Stadium in Foxboro on Sunday afternoon as they play in the Divisional Round of the 2018 playoffs.

This week’s game will be broadcast by CBS on Sunday at 1:05 p.m. and can be seen on WBZ-TV Channel 4. Jim Nantz will handle play-by-play duties with Tony Romo as the color analyst. Tracy Wolfson will work from the sidelines. The game will also be aired on the Patriots flagship radio station 98.5 The Sports Hub with Bob Socci and Scott Zolak on the call, produced by Marc Capello.

The Patriots (11-5) beat the Jets two weeks ago but as the #2 seed were idle during the bye week. They are hoping to win on Sunday and move on to their 8th straight AFC Championship Game.

The Chargers (13-4) beat the Baltimore Ravens 23-17 on Sunday in Baltimore. The Chargers dominated the game and were comfortably ahead 23-3 when the Ravens scored two late touchdowns to make it interesting.

The Patriots and Chargers have a history back to the beginnings of the AFL and will meet for the 42nd time in their shared history. The Chargers beat the Boston Patriots in the 1964 AFL Championship Game and the two teams met two more times in the playoffs following the 2006 and 2007 seasons. New England holds the overall lead in the series 24-15-2 including the playoffs.

The Patriots running game (127.3 yards per game, 5th NFL) is now a three-headed committee with Sony Michel getting the lion’s share on the ground with Rex Burkhead and James White also getting in some work. But a large portion of what makes the ground game go is the use of wide receivers in Jet Sweeps with Cordarrelle Patterson and Julian Edelman.

The Chargers have a good run defense are were the 9th best unit against the run in 2018 allowing just 105.8 yards per game. They stuffed the powerful Ravens running game by utilizing a smaller defense consisting of seven defensive backs. This week they get back a big, big piece of their interior defensive line with Brandon Mebane who missed last week due to the tragic death of his daughter.

I think the Patriots will be able to run some at this defense by mixing things up. Look for the Patriots to run the pony formation with two backs on either side of Brady. I think the Jet sweeps would be of particular use when the Chargers line up in their Wide 9 look with some cutback lanes that they’ll try to exploit.

The Patriots passing game (266.1 yards per game, 8th NFL) will miss the speed, size and sure hands of Josh Gordon in the playoffs now that the pretenders have been wiped away from the schedule. While Patterson has the size and speed, he’s nowhere near the accomplished route runner or receiver that Gordon is. They still have a good, but not great group with Julian Edelman, Chris Hogan, Phillip Dorsett out wide with Rob Gronkowski at tight end and White and Burkhead out of the backfield. The key for them is to utilize everyone, which makes them much harder to stop, something they’ve haven’t always done this season.

The  Chargers have also the 9th best unit against the pass this season, allowing just 227.9 yards per game thru the air. It starts up front with the pass rushers Melvin Ingram and Joey Bosa. Those two can disrupt the passing game of anyone. They frequently slide Ingram inside and line him up on a guard which can be a mismatch, and overload one side with both on one side, which frees up rushers on the opposite side to make plays.

Derwin James the rookie out of Florida State has been huge for the defense leading the team with 105 tackles with 13 passes defensed, 3.5 sacks, and 6 QB hits. Expect him to be lined up with Gronkowski and I like James to win that matchup.

Look for Brady to get the ball out quickly and target the Chargers LBs in the passing game. If they have a weakness it is there. Last year, Brady completed 14-15 for 163 yards against the Chargers when targeting his running backs. Protection will be key here. Look for Josh McDaniels to use uptempo too to keep the Chargers from substituting personnel. It won’t be an easy game on either part of the Patriots offense against this group, but if they play the way they have all season at home, they should find some success.

The Chargers running game is 8th in the league averaging 117.1 yards per game. They lean heavily on Melvin Gordon who gained 885 yards, averaged 5.1 yards per rush and had 10 touchdowns in 2018. They have Austin Ekeler as their secondary back and he too averaged a very good 5.2 yards per rush and had 552 yards with three scores. Patriots fans will long remember the 87-yard run he made in Gillette during the first quarter of the game last year, when they didn’t properly set the edge.

The Patriots run defense is ranked 11th in the league allowing 112.7 yards per game, but it has been very inconsistent. At times this season, they were gashed badly up the middle between the tackles. However, the last two regular season games they were much better, albeit against the Bills and Jets. Setting the edge will be a big factor in this one. As well as doing a good job of clogging the middle of the field at the point of attack.

I’m still not sold on this run defense between the tackles and believe Gordon and Ekeler will have some success running inside. Look for Brian Flores to roll the dice a bit and try to send ILB Elandon Roberts on some run blitzes to try to hit Gordon at or behind the line of scrimmage.

Philip Rivers had an outstanding season, passing for 4300+ yards, 32 touchdowns and just 12 interceptions for a 105.5 passer rating. He has plenty of weapons to throw to with Keenan Allen, 96 catches, 1196 yards, and six TDs, Mike and Tyrell Williams who each had about 650 yards receiving and Gordon and Ekeler out of the backfield. The venerable Antonio Gates is still a third-down target and they’ve activated Hunter Henry this week, he tore an ACL this spring and is ready to go.

The Patriots gave up an average of 246.7 yards thru the air this year but the secondary, particularly the corners are a position of strength. Stephon Gilmore is now one of the top corners in the league and with rookie J.C. Jackson playing very well, Jason McCourty and Jonathan Jones, the team is in good shape there. Pat Chung and Devin McCourty anchor the safety position with Duron Harmon.

The key for the Patriots is to get pressure on Rivers and force the Chargers to keep their running backs in for pass protection. If Gordon has a weakness it is his pass blocking. Both he and Ekeler are very good receivers and would present mismatches to the Patriots linebackers in the passing game. Look for the Pats to try to condense the inside and rushing the A-gap and try to cut down on Rivers’ time to throw downfield.

It will be the backs and tight ends that will either win or lose this matchup for New England. They have the corners to match up and be very competitive with the Chargers WRs. But if Antonio Gates, Gordon, Ekeler and Hunter Henry, who no one knows how effective he’ll be, have big days then it will be a long afternoon for the NE defense.

The Patriots have a very reliable tandem in the kicking game in Stephen Gostkowski and Ryan Allen. The Chargers Michael Badgley had a tremendous game last week against the Ravens and was the difference in the game. But Donnie Jones had a punt blocked in Baltimore and that could be an issue against the Pats who’ve blocked a few down the stretch.

Both teams have big-play returners in the kicking game. Desmond King had a 72-yarder last week. The Pats answer with Patterson and Edelman. Look for NE to come after a punt early in this one.

This one should be the best game of the weekend. The Charger provide a very capable opponent on both sides of the ball. They don’t have blazing speed on offense, like New England but have a plethora of playmakers that can keep a defense on their heels.

The Keys from a Patriots perspective are:

The Patriots will have to run the ball effectively enough to keep those pass rushers on their toes and Brady, in particular, will have to spread the ball around to all of his receivers. That means running out of 11 personnel and passing out 21 personnel.

Keep the Pressure on Rivers and Keep the Backs In:

The Patriots front seven will have to mix things up and bring pressure on Rivers while forcing the RBs to remain in for pass protection. If they can do that and keep them out of the stat sheet in the passing game, it should go a long way.

There will be some points to be had in STs this week. Ryan Allen and Gostkowski are good at keeping the ball away from opponent’s return men. On the other hand they’ll have to get some production out of their own returners. And attack the punting game and get after a kick. They’ve blocked three kicks down the stretch, and could use another one this week.

This one will go down to the wire. If this game were in LA, I’d easily reverse this score, but the Pats have proven to be a much better team at home this season. Brady and Co. get it done and move on their 8th straight AFC Championship Game.  Patriots 27-24