4 years ago at 6:42 am ET
Follow @SteveB7SFG
Posted Under: 2018 Patriots Regular Season 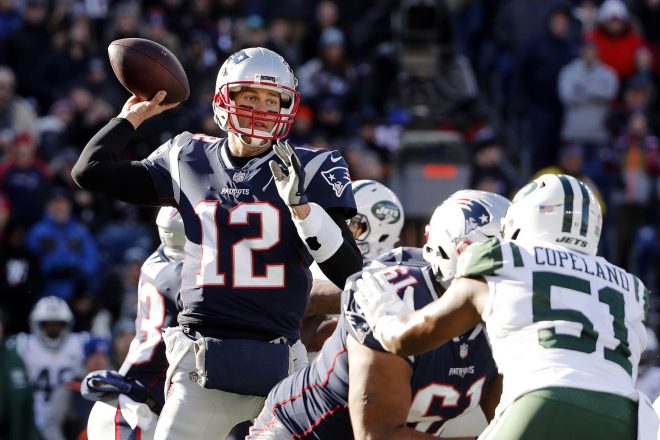 We’re on to the bye week… isn’t it crazy how perceptions change? The Patriots are considered to have had a downer of a season. And yet they’ve won 11 games are getting a bye in the first round of the playoffs because of their thumping of the Jets this afternoon in Foxboro.

Yes, before any of Negative Nancy’s are quick to remind everyone, which I’m sure the hot take artists already are…the Jets mailed this one in. This had none of the intensity we’ve come to expect from the Patriots-Jets games, however, that isn’t what’s important.

What is important, is that the Patriots had a job to do today and that was they had to take care of business, win the game to secure a bye week for the team and then prepare for the Divisional Round. Check and check.

Bill Belichick was happy, he was giving much longer answers than normal and despite his normal dour expression, knew that the team performed exactly as they should have. He said it best when discussing the game in his post-game presser when he asked about the significance of the win and the season.

“There were some good things, and there were some things that could’ve been better – but in the end, we are where we are,” Belichick said. “Essentially we won next week because we won today.” Boom… mike drop.

We don’t know how far this team will go, but we say that every year because the playoffs are a one-game elimination where anything can happen, but in the end, as Belichick said, they are where they are. That is one win away from an eighth consecutive AFC Championship Game.

On Friday we posted our keys to the game and key matchups where we broke down the game positionally. And we hit on some and missed on others.

But here are our observations from today’s game:

Brady Spread the Ball Around:

That doesn’t seem like a big point because it seemed like he always did that. But lately, he’d been too locked into certain players. Not so on Sunday. There was a much more even spread to things and that ended up with one of Brady’s best games in a while.

Brady finished 24-33 (72.7%) for 250 yards with 4 TDs and 0 INTs with a passer rating of 133.8, which was his highest rating since Week 3 of 2017 against Houston. Other than overthrowing a wide-open Chris Hogan in the end zone, he was very sharp and made several really nice throws, his best was the touchdown pass to Rex Burkhead for an 18-yard touchdown.

Chris Hogan, who we were about to put on a milk carton, was rediscovered in the offense today and was targeted 11 times and had six catches for 64 yards. He was wide open in the left half of the end zone where Brady badly overthrew him from the 18, or his numbers would have been even higher. But today was a very welcome sight.

Julian Edelman and Phillip Dorsett each had five catches, James White chipped in four as the production was spread around pretty evenly. Rob Gronkowski had two catches for 24 yards but had a 30-yarder wiped out by a penalty.

We said we wanted to see the ball spread around more…and they did exactly that. And when they do that, this offense is much harder to game plan around.

The Jets had a sound game plan this week, they knew the Patriots were going to try to run the ball, as they did against the Bills last week. And with the passing game scuffling, they were going to take their chances there. So, they were bringing a safety up into the box at the snap and by bringing that extra body up, made it harder for the running game to find the room at the line of scrimmage. But it opened up room in the passing game, where Brady (as we mentioned above) was very efficient.

But regardless, Josh McDaniels kept things moving along and still found ways to keep the running game going. The Patriots were still able to grind out 131 yards on 30 carries and before three Brian Hoyer kneeldowns, they were averaging 4.96 yards per rush. That creativity is what they’ll need in two weeks and beyond.

While Sony Michel had just 50 yards on 14 carries, he once again came very close to breaking a couple of deep runs. He finished off a very solid rookie regular season with 931 yards rushing and that was with no preseason action and in just 13 games.

The Jet sweeps called by McDaniels were once again very effective, a total of four for 40 yards. Two by Julian Edelman for 24 and two by Dorsett for 16. James White added a really nice 21-yard run in the mix.

Defense Did a Good Job of Keeping the Jets Out of the End Zone:

The Jets were banged up at wide receiver but Sam Darnold threw for nearly 350 yards and three scores last week against Green Bay. And regardless of who is on the field, you still have to make plays.

The run defense was solid all day, the only aberration was a scramble from Darnold that went for 28 yards. Elijah McGuire was bottled up for the entire first half, at one point having nine carries for nine yards, one of which went for 17, so he essentially had eight carries for -8 yards when the game was still in doubt. He ran better in the 2nd half but by then the Pats had gone to lighter fronts to get after Sam Darnold who was forced to throw more.

Darnold finished 16-28 for 167 yards with 0 TDs, 0 INTs and a passer rating of just 74.6. The Patriots were blanketing his WRs, especially Robby Anderson who was covered by Stephon Gilmore (3 catches, 24 yards). After that absolute stinker in Miami, the defense held Pittsburgh to 17 points, Buffalo to 12 (with a garbage time TD) and the Jets to three. That’s trending in the right direction.

Gilmore and Trey Flowers have had outstanding seasons. And the Pats secondary has been one of the strengths of the team this year. There is still some question about the middle of the DL in the running game, but with Danny Shelton back inside, we’ll see how that works out.

In the six games since they came off the bye, they’ve held all of their opponents (except Miami) to 17 points or less.

Turnovers Are Always a Welcome Sight:

The defense has been pretty opportunistic this season forcing 28 turnovers (18 interceptions, 10 fumble recoveries) the most the team has had since 2013. They forced three more on Sunday, Trey Flowers punched the ball out of McGuire’s hands in the first half, which they turned into a touchdown shortly after. Adam Butler knocked the ball out of Darnold’s hand which Kyle Van Noy scooped up and returned 46-yards for a TD (which will thrill a certain 2-6 radio show) and Jonathan Jones stripped the ball on the Jets final offensive play before Hoyer’s kneeldowns.

This is important because these things to tend to snowball one way or the other. When a defense isn’t getting any turnovers, they seem to go a long time without one. When a defense starts to get a bunch, that trend also seems to snowball…in a good way.

Another stat to consider is that the defense also had another 10 turnovers by stopping the opponent on downs.

Now We Wait …and Watch:

The Patriots came out of the game relatively unscathed, Devin McCourty suffered a concussion, but he’ll have two weeks to get ready for whoever gets the nod, and that game will be here in Gillette Stadium on Sunday, January 13 at 1:05 p.m.

The games should be interesting to watch this week, but we’ll be watching and trying to look at how this crazy 2018 NFL season continues to play out.

We’re on to the bye week…