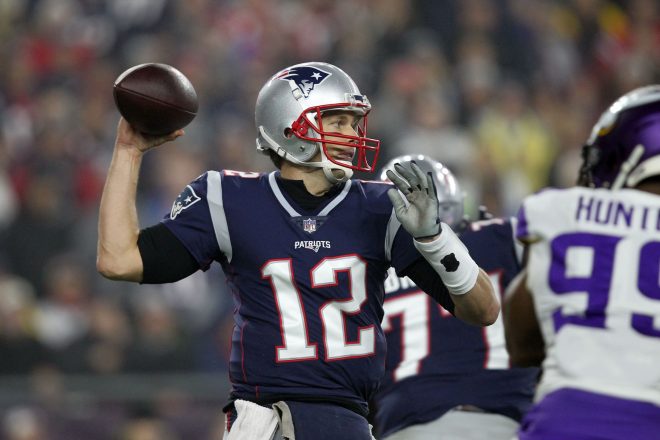 Last Chance For Tune-Up Before Postseason

The New England Patriots close out the regular season just where they began it, at Gillette Stadium in Foxboro where they take on the Jets at 1:00 p.m. with a chance to secure a first-round bye in the playoffs.

A Patriots win guarantees them a ticket straight to the divisional round and while they still have a chance at the #1 seed, that would require both the Chargers lose on the road in Denver and for Chiefs to lose at home against the Raiders, which while not impossible,  are pretty remote.

The Jets come in at 4-11 and it is probably the last game for Todd Bowles as their head coach. But a bright spot has been the play of QB Sam Darnold, who has turned it on since coming back from an injury the past three weeks.

Normally this would be kind of low-hanging fruit but with the passing game uncharacteristically scuffling late in the season and questions persisting that Brady is playing with a hurt knee, this late-season game puts some of the focus directly on #12.

Last week Brady had season lows in attempts, mainly because the running game was tooling up the Bills defense for 275 yards until a couple of kneel-downs at the end. At one point they ran the ball ten straight times. But with a ground game gashing the Bills as such, one would think the play-action passing game would have been wide open. But it was not and on top of that, the pass protection wasn’t as good as we’ve come to expect.

The Jets have the 26th rated run defense and the 26th rated pass defense, however, they are #2 in 3rd down defense in 2018, so there is that to consider. And Brady has been bailing out of some of his throws, which has led to the injury questions. We’ll be watching pass distribution, movement in the pocket and to see if they can generate any kind of passing game this week.

The Patriots best defensive lineman may be playing in his last regular season game as a Patriot on Sunday. Flowers is a free agent and will no doubt draw plenty of interest around the league, however, right here and now, the problem is getting pressure on Darnold without overcommitting and allowing scrambling lanes.

The Jets offensive line has been doing a much better job of protecting Sam Darnold lately and the Patriots will be trying to get some pressure on him and trying to force some mistakes.

We’ll see how the team does overall at getting after Darnold tomorrow, but they’ll look to Flowers, who does a lot of things very well to lead the way there.

The Patriots rookie running back still has an outside shot at rushing for 1000 yards but would need another big game against the Jets this week. Michel has 881 yards rushing in 12 games this season and would need 119 tomorrow.

Regardless of personal accomplishments, Michel is the key cog in the Patriots offense right now. With the passing game struggling, the Patriots have leaned on the running game to get things going and that is primarily on Michel’s shoulders.

While the Jets run defense hasn’t been great, they know the Patriots are going to try to run the ball, so they’ll be trying to do what the Patriots normally do, make their opponent one-dimensional and it will be up to Michel to ignite the ground game.

The Patriots have found another gem in the UDFA market with Jackson. He has come on in the second half of the season and playing some very impressive football at corner for the Pats. The tall (6’1) rookie from Maryland has been steadily improving during the season and has impressed his teammates and coaches, starting the past four games.

Bill Belichick was asked about his ascension this week and was praising Jackson’s work ethic. “Just steady grinder, one day at a time, just trying to get better,” Belichick said. “If he makes mistakes, he’ll try to correct it. He works at it, usually shows some improvement in that area, go on to something else. But, his durability, his consistency and just being out there every day practicing, doing things, getting corrected, getting better, working on them the next day. I mean, that’s really how you improve. So, practicing and being durable and being consistent, it goes a long way.”

Opposing QBs are completing just 43 percent of the passes they attempt in his direction and their passer ratings when targeting Jackson is just 31.3 which is tops in the league at his position. With both Quincy Enunwa and Jermaine Kearse out for the game, covering the Jets top WR Robby Anderson will fall to Stephon Gilmore. Jackson may draw speedy return man Andre Roberts, UDFA Deontay Burnett or STs player Charone Peake.

The Patriots wide receiver was initially looked at as one of the guys who would take up the slack once Josh Gordon was gone. However, last week while playing more than 60 snaps on offense, Hogan wasn’t targeted once.

Hogan hasn’t caught more than two passes in a game for more than two months. He’s suffering thru the biggest freeze out “since the big man joined the band” and it doesn’t show any signs of easing. The Patriots need to get everyone left involved in the passing game. That includes Julian Edelman, Rob Gronkowski, James White, Cordarrelle Patterson, Rex Burkhead, Phillip Dorset as well as Hogan. Once the playoffs start, targeting only one or two of those players isn’t going to get it done.

We’ll be watching Hogan this week, who has been getting open, but will the QB and offensive coordinator?

By: Robert Alvarez
Julian Edelman appears on the Barstool Sports "Pardon My Take" podcast, reacts to Bill O'Brien's hiring, and more.
21 hours ago