4 years ago at 7:35 am ET
Follow @SteveB7SFG
Posted Under: 2018 Patriots Regular Season 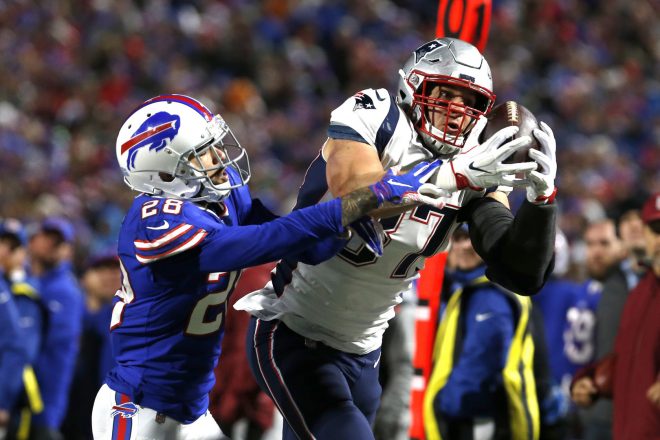 Patriots-Bills Week 16, Key Matchups, Who Has the Razor’s Edge?

The New England Patriots are sailing in some uncharted waters this week. When we looked at this game on the schedule back in the spring, we expected that the division would be wrapped up and this game would only figure in whether New England was still playing for the top seed. And….we were wrong.

This game is extremely important to the Patriots this week because the division isn’t wrapped up and they need a win to do just that. The team can still get the #2 seed and a bye but now they no longer control their own destiny. They need to win their final two games at home this week against Buffalo and the Jets next week and hope that the Texans lose to either the Eagles or the Jaguars. Uncharted waters indeed.

The Patriots (9-5) lost to the Pittsburgh Steelers 17-10 last week as the offense only scored 10 points and made a ton of mistakes. Dropped passes on third down, penalties (14) and breakdowns at key times was the story as they dropped their second in a row.

The Bills (5-9) beat the Detroit Lions 14-13 as Josh Allen hit Robert Foster with a 42-yard touchdown pass early in the fourth quarter to come from behind.

Tom Brady’s record against the Bills in games where he’s started and finished the game is 29-3. The Patriots won the last meeting between the two teams 25-6 on October 29 as the teams met on Monday Night Football.

This week’s game will be broadcast by CBS on Sunday, December 23 at 1:00 p.m.and can be seen locally on WBZ-TV Channel 4. Greg Gumbel will handle play-by-play duties with Trent Green and Bruce Arians as the color analysts. Melanie Collins will work from the sidelines.

The game will also be broadcast on the Patriots flagship station 98.5 The Sports Hub with Bob Socci doing the play-by-play, with former Patriots quarterback Scott Zolak, who will provide color analysis. The games are produced by Marc Cappello.

The Patriots running game has sputtered the past two weeks on the road as the play of the offensive line has been consistently, inconsistent. Sony Michel is leading the way for the Patriots along with Rex Burkhead and James White. Fullback James Develin has been getting the ball more in short yardage and goal line.

Buffalo is 10th in the league allowing just 104.8 yards per game on the ground and just 4.0 yards per rush.  It starts up front with the big men, Kyle Williams, and Adolphus Washington with the linebackers, Matt Milano and Preston Brown being very active. However, with Milano suffering a broken fibula against the Jets, it is a blow to the defense.

In the first meeting, the Patriots didn’t have either Sony Michel or Rex Burkhead who were both out with an injury. However, look for the Bills to put pressure on the Patriots on early downs to try to force them into third and long situations.

The Patriots passing game just lost a huge piece as Josh Gordon’s mental health issues are forcing him away for the game, possibly for good this time. He averaged 65 yards per game receiving in his 11 games with the Patriots and it won’t be easy to just say, “next man up” as they have around here in the past.

In the first meeting, Tom Brady threw for 324 yards in Buffalo. It will be difficult to throw for that much this time around despite still having Julian Edelman, James White, Rob Gronkowski, Chris Hogan, and Phillip Dorsett.

The Bills defense is #1 against the pass allowing just 187.4 yards per pass play. They’re getting very good play from their corners and linebackers and safeties in coverage. The Bills have 31 sacks on the season.

With Gordon gone Brady will have to lean on everybody else now to pick up the slack. I would expect him to go both Julian Edelman (9-104) and James White (10-79) as he did in the first meeting to keep the chains moving.  The Bills did a good with their safeties on Rob Gronkowski in the first meeting and I’d expect more of the same. Buffalo is outstanding at not allowing big pass plays and I’d expect Brady to keep the ball in the short passing game.

As yes as strange as this sounds I expect the Patriots run defense which has been awful for the past few weeks to be better this week. The Bills running game has been struggling with their backs running the ball. LeSean McCoy and Chris Ivory have averaged just 3.3 and 3.4 yards per rush respectively in 2018. Part of the reason is the offensive line was bad earlier in the season but has been playing better of late.

However, Josh Allen has transformed the running game. He’s rushed for 506 yards on the season and without him, the Bills rushing average of 124.7 would transform to just 90.9 yards per game.

With the issues the Patriots have had stopping the run, I’d look for Danny Shelton to make a return this week. Buffalo has the 31st rated pass offense and they want to run the football. The Patriots need a player over the nose that can two-gap. He’s been a healthy scratch the past few weeks but this week, I’d expect him back.

The Bills passing game has been really struggling as Josh Allen has struggled in his rookie season. But he’s gradually learning his craft and he’s cutting down his mistakes. But overall, they average just 168.7 yards per game, 31st in the NFL. He has Robert Foster who is becoming the Bills big play WR, he’s averaged 25-yards per reception this year. Zay Jones is their leading receiver with 49 catches.

The Patriots pass defense is currently 23rd allowing 256 yards per game, however, the secondary has been playing quite well and it seems that they’ve found another quality UDFA in corner J.C. Jackson. The Patriots don’t generate a ton of sacks but are tied in the league at pressuring the QB without blitzing.

The Bills like to run deep crosses using a rub route to get Foster open deep across the middle of the field. For the Patriots, they’ll look to bring pressure and force Allen to throw from outside the pocket without allowing him to run…More of this below.

The Patriots tandem of Stephen Gostkowski and Ryan Allen have a slight edge over Stephen Hauschka and Corey Bojorquez in the kicking game, especially being at home. But their numbers are pretty similar. But with Cordarrelle Patterson in the kick return game, the Patriots get the edge in there, although in the first meeting Micah Hyde had a 31-yard punt return.

This one will be closer than people are predicting. The Bills defense is tough and knows the Patriots well. They played them very tough in the first meeting back in October. I would expect this game to be much of the same.

Three keys to the game from a Patriots perspective include:

The Bills are -8 in the turnover department. Buffalo QBs have thrown 20 interceptions this season, with Allen tossing nine of them. They are the 31st team in the league in scoring averaging just 15.4 points per game. They don’t have the kind of offense that can afford to give away points. If the Patriots can play a clean game, they will put pressure on the Bills offense to take some chances.

Force Allen to Throw From Outside the Pocket:

Allen has played better of late as his pass protection has improved. But if the Patriots can generate pressure while keeping a spy on Allen and not allowing him to run, his numbers throwing outside the pocket are not good. ESPN’s Mike Rodak just posted some stats when Allen is forced to throw outside the pocket.
Completion percentage- 20 (33rd in the league)
Passing Yards per Attempt- 3.1 (30th in the league)
Off Target Throws- 40 % (most in the NFL)
Interception Percentage – 6.9 % (4th most in the NFL)

If the Patriots are successful in getting some pressure on Allen, they’d need to put a spy on him. I really don’t believe that their linebackers are fast enough to do the job…possibly Kyle Van Noy. But one possible piece would be to go to their “Big Nickel” with Obi Melifonwu substituting on obvious passing downs. He’d have the speed to keep up with Allen.

Spread the Ball Around:

The Patriots are at their best when Tom Brady spreads the wealth equally among the players. They need to run the ball better and will need a lot better effort from the offensive line. I’d expect to see the uptempo offense with the Pony formation with Burkhead and White a bit on passing downs.

This one will be close but eventually, the Pats will pull away and they’ll finally be able to break out the Hats and T-Shirts. Patriots 27-17

By: Robert Alvarez
Robert Kraft lends the Patriots team plane to the University of Virginia so its players can attend the funerals of fallen teammates.
12 seconds ago

By: Robert Alvarez
Sideline mic'd up sights and sounds during the New England Patriots' Week 12, thanksgiving matchup with the Minnesota Vikings.
30 mins ago