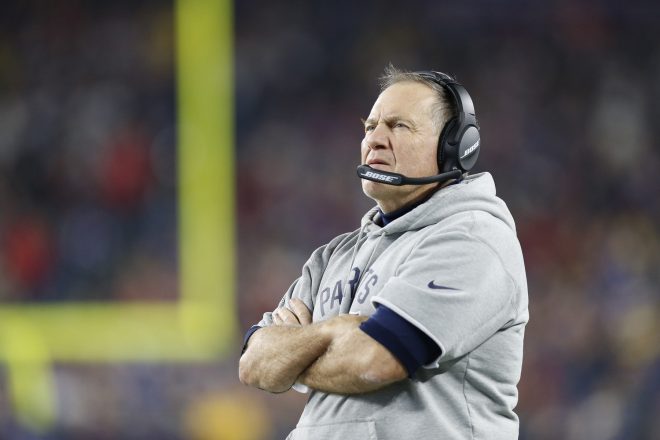 Steelers Down Patriots 17-10, Knock Them Out of a Bye

Dropped passes, missed opportunities and generally, poor play has the team now on the outside looking in for one of the two teams earning a bye in the AFC. The Patriots, like a week ago in Miami, earned that loss this afternoon in Pittsburgh. They were outplayed, and once again were owned at the line of scrimmage in the Steelers 17-10 win.

Their second loss in a row drops the team to 9-5 and the #3 seed, forcing them to now have to beat the Bills next week at home to win the division. After that, they close out against the Jets and they have to hope that they win out at home while hoping for the Texans to stumble against either the Eagles or the Jaguars in the final two weeks. Other than that, they will be playing on Wild Card Weekend.

The Steelers went to an empty formation early in the game so that the Patriots couldn’t effectively double their wide receivers. It was a great tactic and they easily sliced and diced the defense by mixing in well-designed runs and scored easily on the opening possession.

The Patriots answered when the Steelers totally blew a coverage and left Chris Hogan all alone on a cross from left to right. Brady hit Hogan in stride and he cruised 63-yards without a Steeler in sight. It looked like it was going to be another shootout.

But only one more touchdown would be scored, a Roethlisberger 17-yard pass to Antonio Brown one play after a horrible pass interference penalty on the Patriots for 26 yards set the Steelers up inside the red zone. Pittsburgh went 92 yards in eight plays to take a 14-7 lead. The teams would just trade field goals for the rest of the game.

The game against the Steelers can be summed by the A. Penalties, B. Red Zone and C. Run Defense. And all three of those areas, the Patriots rate A’s this week. Eh…you say. Yes, A’s as in Appalling, Awful and Atrocious.

Penalties: A as in Appalling

The Patriots had 14 penalties on Sunday….That is totally unacceptable on any level. Sony Michel had a 25-yard run wiped out by a holding call at the line of scrimmage after he was clearly past the line and into the second level. That just isn’t smart football.

Another holding call pushed them from the 2-yard line on a Michel run on first and goal at the 5-yard line to the 15. Two plays later Brady was picked off by Joe Haden when trying to throw the ball out of bounds.

On the final drive, facing a 2nd and 5 at the Pittsburgh 11-yard line, yet another holding call pushes them back to the 21. On third down, Brady throws it out the back of the end zone and misses James White standing all alone in the flat. He had an easy 8-10 and would have made the 4th down pass much more manageable.

Red Zone:  A as in Awful

When you go 0-3 in the red zone and a combined 3-11 on third and fourth down attempts, you’re not going to win many football games. The Steelers were getting good pressure on Brady and were intent on taking away the middle of the field….which they did. Which begs to the question, why didn’t Josh McDaniels adjust?

Josh Gordon was MIA in this one, he wasn’t even on the field for the final series inside the Pittsburgh red zone. After his big TD catch, Chris Hogan was rendered invisible as well. Very curious play calling in this one.

Run Defense: A as in Atrocious

Jaylen Samuels sliced and diced the front seven to the tune of 142 yards and a 7.2-yard average. Pittsburgh has been awful at running the football, just like Miami was before last week. And once again the offensive line of the Steelers totally dominated the point of attack all game.

The Patriots front seven doesn’t travel well because in every loss this season, they’ve been blown off the ball. This doesn’t bode well for a team on the outside looking in for a bye in the playoffs.

The Patriots limp home after an abbreviated by disastrous 0-2 road trip. Instead of fighting for the #1 seed and locking up the division, now they are no closer to the division and any chance of the #1 seed are gone.

The run defense is scary to watch…and not in a good way. And the offense is still searching for an identity after 14 games.

By: Mark Morse
The final installment of my roster evaluation focuses on the Defensive Backs.
1 day ago

By: Ian Logue
With training camp now looming, the vast majority of remaining players are set to arrive at Gillette Stadium on Tuesday, with players set to go…
1 day ago

By: Steve Balestrieri
Kyle Dugger is the next star waiting in the wings. As a rookie, he was already being used as a movable chess piece by the…
2 days ago

Best Of Social Media: The Patriots Takeover Rivalry Weekend Between The Red Sox and Yankees

By: Robert Alvarez
Members of the 2021 New England Patriots throw out honorary first pitches at Fenway Park before games between the Red Sox and Yankees.
2 days ago

New England Patriots 2021: Bounce Back Season or More of the Same?

By: Chris Smith
The 2020 season will live long in the memory for many fans of the New England Patriots, sadly for all the wrong reasons. Suffering a…
2 days ago