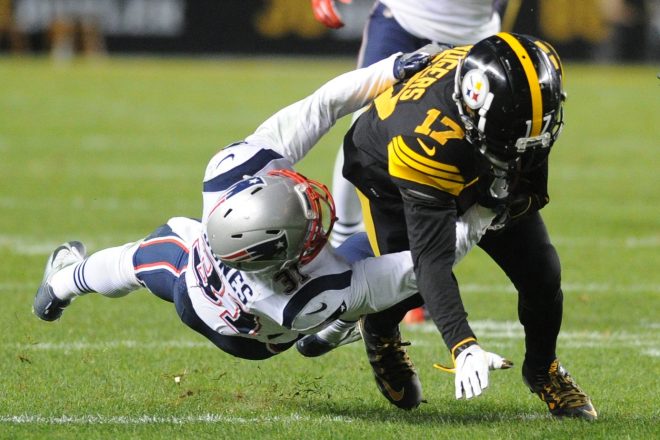 Sunday’s 17-10 loss to the Steelers was both disappointing and frustrating, with the Patriots yet again coming away with another self-inflicted defeat thanks to their performance down in Pittsburgh.

Here are some thoughts as the Patriots find themselves still without an AFC East title and an unsettled postseason situation:

1) This one stung but unlike last week in Miami, you could see it coming – Last week’s defeat might have come in shocking fashion, but Sunday’s outcome was more like a slow twisting of the knife after fans had to endure a death by a thousand cuts, some of which ended up being self-inflicted.

Oddly enough, it didn’t feel that way in the beginning. While Pittsburgh put together a strong drive to open the game, the Patriots offense gave everyone hope that it would be business as usual after Tom Brady found Chris Hogan wide open for a 63-yard touchdown on just their third offensive snap of the game.

Unfortunately, that was the only highlight of the contest and things started to unravel a bit in the second quarter thanks to a phantom pass-interference call on Jonathan Jones that helped set up the Steelers’ second touchdown, which put Pittsburgh ahead at 14-7.

From there, the two teams battled back and forth yet despite the close margin, it never felt like the Patriots were ever able to get a handle on the game. Following the jubilation people enjoyed watching Hogan score and even with the two interceptions by Duron Harmon, the rest of the game felt like an uphill battle with the Patriots pushing a boulder up a hill that kept rolling back at them.

Hogan’s touchdown would be the only time they would see the end zone after they managed just three points the rest of the way. For a team that felt like they might have been figuring it out and finally coming together on the offensive side of the football, Sunday was an unsettling reminder that they still have their work cut out for them with just two weeks left in the regular season.

2) They definitely had their chances – The worst part was, they had their chances to win this one. But for a team that’s normally among the best in the NFL when it comes to playing disciplined football, Sunday’s match-up certainly proved otherwise. They committed an astounding 14 penalties for 106 yards, including an unbelievable sequence in the fourth quarter where they squandered a key opportunity to take the lead after driving down to the Steelers’ 5yd line.

After Sony Michel picked up 3 yards to get the Patriots down to Pittsburgh’s 2-yard line, Marcus Cannon was called for offensive holding, backing the Patriots up to their own 15. Brady connected with James White on the next play for a loss of one-yard, and the Steelers then put pressure on Brady on the ensuing 2nd-and-16, which flushed him out and saw him have to flee backward.

As he retreated, Brady tried to throw the ball out of bounds off of his back foot but he couldn’t get nearly enough on it. Pittsburgh’s Joe Haden leaped up and snatched it out of the air near the right sideline, out-leaping both Julian Edelman and Rob Gronkowski while managing to get both feet down and ending the potential Patriots threat.

The play came with just under 8-minutes left to play in the game, which might seem like there was still plenty of time left but you could feel the momentum swing from there. The Steelers took advantage, marching 66-yards on 13 plays, which ended in Chris Boswell getting redemption after having missed an earlier field goal by hitting from 48-yards out to put Pittsburgh up 17-10 with just two minutes left in the game. You could essentially feel it coming, knowing that Boswell would get an opportunity like that to redeem himself and potentially spoil the Patriots chance of dealing them a home loss. Unfortunately, that’s more or less what happened.

3) They ultimately beat themselves – The worst part was, even as bad as the game had gone to that point, New England had one more shot to get back in it and tie things up after being down by just one touchdown at 17-10 at the end of the game.

But much like the rest of the game, miscues by their offensive line sabotaged them down the stretch. Joe Thuney made the first mistake, with the offensive lineman drawing a false start penalty after the Patriots had managed to fight their way out to their own 40-yard line.

However, Brady bailed him out when he found Edelman for a 34-yard strike down the seam, which put them in Steelers territory. Three plays later, they managed to get themselves down to Pittsburgh’s 11-yard line.

But an incompletion on 2nd-and-5 saw Shaq Mason get called for a holding penalty, which then made it 2nd-and-15 and took them out of scoring territory after they were backed up to Pittsburgh’s 21-yard line. From there, Brady threw incomplete twice to Gronkowski and then overthrew Edelman down the middle on 4th-and-15, with the ball landing on the turf.

That caused the Steelers faithful to erupt and start wildly waving their ridiculous yellow towels, confirming the ugly reality that any shot at a comeback by the Patriots was officially over.

4) Penalties and mental errors killed them – When the Patriots look back at the film on Monday, the biggest thing they’re going to realize is how badly they gave this game away. For a team that normally makes timely plays to win a game, they made more untimely plays that ruined any chance to pull off a win in a stadium where they had previously had success.

Let’s be honest, this was arguably the most uncharacteristic performance we’ve seen in recent memory in terms of mental errors. Some of the flags were questionable at best, but the frustrating part was the fact they just couldn’t do enough consistently to keep that from being a factor.

To make matters worse, drops by key players compounded an already big problem. When they weren’t being called back for being flagged, they had their best players letting opportunities slip right through their fingers.

For a player who is normally pretty clutch and reliable, Julian Edelman seems like he’s been struggling as of late and he’s had trouble holding on to the football. The veteran receiver had a couple of key drops in this one, with Josh Gordon also suffering a big drop of his own on a key third down play to begin the second half.

It felt like they essentially killed their own momentum and you never had a feeling throughout the entire contest that they were ever going to come out of it. The fact the Patriots were still in the game at the end was surprising, but they just didn’t have the mental toughness to be able to go out and execute an improbable come-from-behind win.

5) The run defense made things tough – While the Patriots will play their final two games at home, the stark difference in their defense away from Gillette Stadium should have most fans concerned about what the future may hold in January. This is a team that during the last two weeks hasn’t looked anything like the group we saw dominate against Minnesota, which at the time had some believing they had finally had a breakthrough game.

Instead, their issues are clearly still there, with their problems against the run being the most glaring. Mike Tomlin surprisingly took advantage, with the Steelers making a big commitment to their ground game to try and exploit them. New England’s defensive line was pushed around throughout most of the game and the number that stands out was the fact that Jaylen Samuels averaged a staggering 7.5 yards per-carry after rushing for 142-yards on 19 carries.

Overall, they did a relatively good job against Ben Roethlisberger and limited the damage Pittsburgh did through the air, with Duron Harmon picking Roethlisberger off twice. They even managed to hold the Steelers without a touchdown in the second half, but their inability to stop the run was a problem for most of the game.

The other key stat was the fact the Patriots defense allowed an incredible 7 runs of 10 or more yards, including one for 20+. That’s obviously a major problem, and it allowed the Steelers to possess the football and keep the ball out of Brady’s hands.

It’s been a consistent issue and remains one that doesn’t appear will get fixed heading into the playoffs. Factor in their inconsistencies on offense and it certainly raises the concern level to the point where not having the advantage of home-field in the postseason could be a serious issue.

The only saving grace is the fact that other top teams in the AFC are also having issues down the stretch and there’s still time for things to go New England’s way. The problem is, they need to take care of business on their own and they haven’t been able to do that after Sunday’s result leaves them with back-to-back December losses for the first time since 2002.

Hopefully being at Gillette Stadium over these final two games will cure what’s ailed them the last two weeks and they’ll at least be able to lock up the Division and finish out the year strong.

We’ve seen them get through worse, but Sunday’s game is enough of a reminder that this group has a fair amount of problems that historically haven’t been this bad at this point in the year. The bad news is, they’re running out of time to get them fixed, but whether or not they can is now the biggest question heading into what’s about to become the most important two weeks of their season.