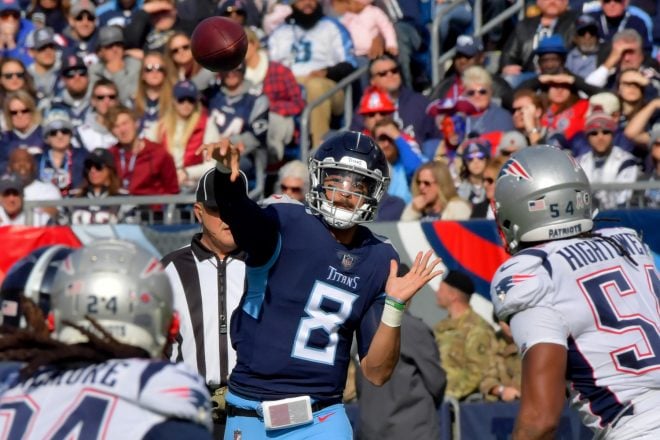 NASHVILLE, Tenn. – First it was Matt Patricia, now it was Mike Vrabel’s turn.

Vrabel is a 43-year-old rookie head coach down here in Nashville, after a nice NFL career as a linebacker with Pittsburgh and New England.  His eight years in Foxborough endeared him forever in the eyes of Patriot Nation.  Vrabel was intelligent, effective, and also good at catching touchdowns on offense.  He seemed to epitomize what being a Patriot was all about.

Now as a head coach, Vrabel showed that he can game plan against his old team and coach as well.

Along with former Patriot defensive coordinator Dean Pees, Vrabel almost completely suffocated the Patriot offense with an effective pass rush, good pass coverage, and a ton more energy than their opponents.  Marcus Mariota threw for two touchdowns, and the Tennessee Titans beat the Patriots on Sunday at Nissan Stadium, 34-10.  The Patriots head into the bye week 7-3, in need of healing and finding out how to move forward from such a jarring loss.

This was Tennessee’s first win against the Patriots since a Monday night loss in 2002, Tom Brady’s second year as starting quarterback.  Tennessee had much more invested in this game than the Patriots, who fell to 2-3 in road games this year.  All three Patriot losses saw the opponent play with more energy and enthusiasm, with the Patriots looking almost disinterested for most of the game.

Vrabel and Pees deserve a ton of credit for shutting down Brady and the Patriot offense.  Brady was only 21 of 41 passing for 254 yards.  His passer rating was 70.6.  Without Rob Gronkowski again, Brady found slim pickings all game long.  Julian Edelman had nine catches for 104 yards, and left the game in the fourth quarter with a foot injury which on the surface didn’t look too serious.  Josh Gordon, who injured one of the fingers in his right hand last week at Buffalo, had four catches for 81 yards but had two critical drops.

It figured going into this game that the focal point of the game would be for the Patriots to attack former cornerback/Super Bowl hero Malcolm Butler.  Butler has had a generally poor season thus far in his first season as a Titan, but his name seldom came up during the game.  Butler mostly covered Chris Hogan, and he was targeted only once with no pass catches.  No explanation has yet been offered for Butler being benched in Super Bowl LII, but the Patriots’ inability to expose Butler as a weakness out there is a bit telling.

Part of the problem is that the Titans’ defense never allowed Brady to get into a rhythm.  Brady was sacked three times for 23 yards, and had a ton of hurried throws and throwaways all game long.  If attacking Butler was indeed part of the game plan, perhaps the Patriots simply weren’t able to because Brady didn’t have the time to try and attack Butler.

Meanwhile, the Tennessee offensive line ruled the day for the offense as the Patriots were consistently unable to get off the field.  In the first quarter, Tennessee converted a first and 25 with a 26-yard pass from Mariota to Corey Davis, who made Stephon Gilmore look bad most all game long.  In the second quarter, facing third and 15, Mariota once again found Davis for 21 yards and a first down, again with Gilmore in coverage.  In the third quarter, facing first and 20, Mariota hit Davis for 27 yards.

Davis finished with 125 yards receiving on seven catches.  Mariota finished 16 of 24 passing for 228 yards, two touchdowns and a rating of 125.0.

Another expatriate, Dion Lewis, was held to 57 yards on 20 carries and a 2.8 average.  Derrick Henry had 58 yards on only 11 carries and a 5.3 average.  The Patriots did a pretty good job on containing Lewis, but too many others weren’t dealt with that well.

The game also featured both quarterbacks catching a pass, the first time that has happened in the NFL since 1995.  In the fourth quarter, during a last gasp drive to try and get back into the game, facing third down and 7 at the Tennessee 43, Brady handed off to James White and headed left.  He flipped the ball on a reverse to Edelman, then Edelman hit Brady wide open in the right flat.  Brady stumbled after the catch and was stopped a yard shy of the first down.  That stumble proved critical, as the Patriots were forced to go for it in fourth and one.  But a false start on Marcus Cannon made it fourth and 6, and an incompletion to Edelman more or less ended the game.

On the ensuing drive, Mariota handed off to Lewis, who flipped it to Darius Jennings running left.  Jennings then floated one to Mariota in the left flat, and the swift quarterback took off for 21 yards.  The Titans put the game away five plays later when Henry ran it in from ten yards out on a Wildcat play.

The Patriots will head to the Meadowlands in two weeks to take on the Jets.  During that time, the Patriots have to hope that Gronkowski heals up, that Edelman isn’t hurt too badly, and that the team can put this loss behind them.  The Patriots looked badly outplayed on the road for three times now this season, and two of those losses were against head coaches who knew the Patriots very well.

Lots of Patriot fans came to Music City, hoping for a fun weekend.  The C&W music was most likely first rate, southern hospitality was probably in full bloom, and this city, which got a lot of positive mojo from their hockey team’s appearance in the 2017 Stanley Cup Finals, perhaps gave the visiting fans a new perspective on this interesting city.

But the game was unfortunately not worth the trip.  Tennessee absolutely killed the Patriots.  And the expatriates had lots to cheer about.

READ NEXT:
5 Things We Learned From the Patriots Loss to The Titans
Posted Under: 2018 Patriots Regular Season