4 years ago at 7:49 am ET
Follow @SteveB7SFG
Posted Under: Patriots Commentary 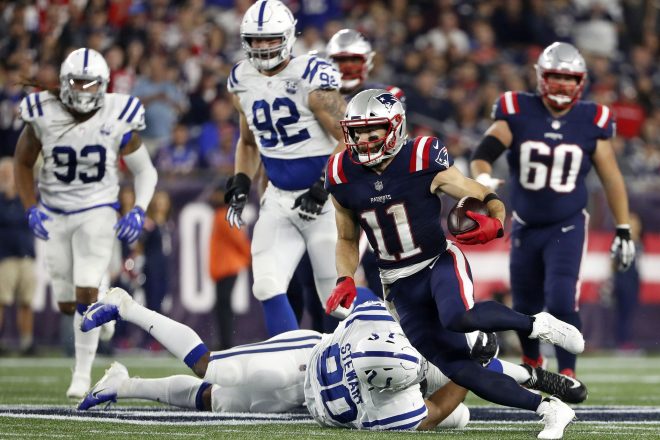 “Once More unto the Breach”

The New England Patriots return home and face off next against the Green Bay Packers in yet another primetime game this Sunday night. Remember when the Patriots played on Sunday afternoons? This primetime stuff is getting ridiculous.

A lot of the fun of watching two future Hall of Fame QBs with Tom Brady and Aaron Rodgers going head to head against one another is lost when the ridiculous “who’s better” crap gets injected into the equation ad nauseam. Like our politics of today, neither side is going to budge, so just sit back and enjoy the offenses of each doing their thing on Sunday and revel in it. These matchups aren’t going to be around much longer.

This is an important game for both teams, the Patriots have won five in a row and are right in the mix for one of the top teams in the AFC and an all-important first-round bye in the playoffs. The Packers are a much better team than their 3-3-1 record and need to get on a roll. They nearly pulled off a huge upset last week against the undefeated Rams. So, how they react this week will have a lot to say about the rest of their season.

So, from a Patriots perspective if we can tear ourselves away from the Red Sox celebration for a moment, here are our Players to Watch on Sunday:

The Patriots very talented corner has been outstanding all season and is now facing arguably his toughest test of the season. Davante Adams is Rodgers go-to guy and he’s having an outstanding season. He’s caught 52 passes for 690 yards and 6 TDs thru just the first seven games of the season. He’s on pace for 118 catches, 1,577 receiving yards, and 13 touchdowns.

Gilmore will have his hands full with the speedy Adams who said this week, he doesn’t believe anyone can cover him. And he may be right, the Patriots may have a plan for Gilmore to cover him underneath with safety help over the top. It would seem to be the normal Patriot M.O of trying to limit the top weapon of the opposition. If it isn’t Adams, Gilmore would draw Randall Cobb, not much of a break there is it?

But regardless, Gilmore has been outstanding since the first OTA session this spring. He should garner some serious Pro Bowl consideration this winter. The soft-spoken Gilmore has drawn Sammy Watkins of the Chiefs, Allen Robinson of the Bears and Kelvin Benjamin of the Bills the past three games. Those receivers combined for a total of five catches for 67 yards in those three games. Opposing QBs have only completed 28 percent of the passes targeting WRs Gilmore is covering. This should be a great matchup.

The Patriots best player on the front seven had a tremendous game against the Bills on Monday night. Six tackles, two tackles for loss, two QB hits and he should have had an interception of Derek Anderson but couldn’t hold on.

This week the stakes and the quarry are much, much tougher. The Patriots remember what Aaron Rodgers did to them in Green Bay a few years ago. The front seven will have to play a very fine balancing act. They have to be able to pressure Rodgers enough to get him to get rid of the ball asap but do so in a way that keeps him contained in the pocket. If he breaks containment, very bad things will happen and all of them will happen to the defense.

They’ll need a big effort from everyone on the defensive front seven but a lot of the pressure will be on Flowers to lead the way. Flowers coming out party as a rookie featured a sack of Rodgers in Gillette several years ago in preseason. The Patriots will be hoping to see much more of that on Sunday night. 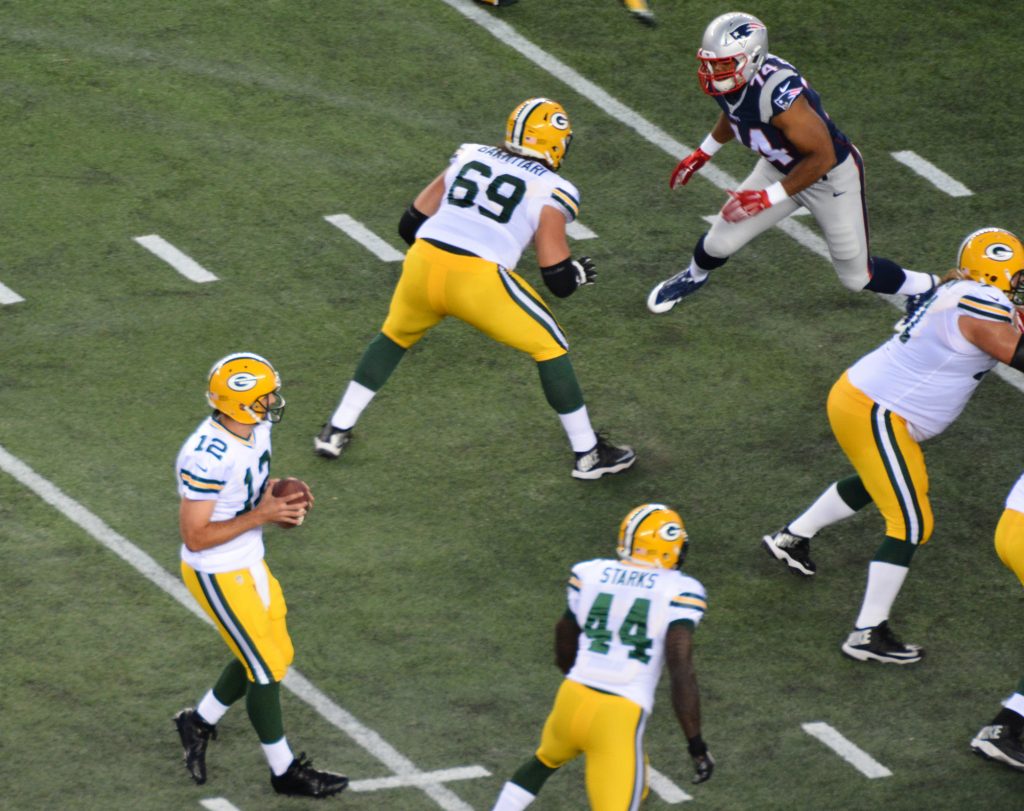 The Patriots will be minus Shaq Mason on the interior of their offensive line this week and Ted Karras who subbed in for Mason when he first got hurt in Buffalo on Monday night. Mason hurt his calf against the Bills and didn’t return.

Karras is the Patriots top backup at all three of the interior offensive line positions but is probably best suited for the center position but he’ll be at right guard this week. And his job will likely entail matching up with Mike Daniels and Kenny Clark, both of whom are having very solid 2017 campaigns.

This will be a big test for Karras, he hasn’t played in a ton of games thus far in his career and the Packers will be looking to test not only his skill but his communication with the other offensive linemen when the Packers stunt, or blitz. There’s no pressure on Karras…right? He’s just on the stage with the two of the best QBs in any era and it is on national television to boot.

The Patriots Swiss Army Knife has a lot of pressure on him since the injury epidemic has hit the New England running back position hard. Jeremy Hill is gone for the year with an ACL tear, Rex Burkhead is on IR with multiple concussions and isn’t eligible to return until Week 14. And Sony Michel seemed to avert serious injury in Chicago when his knee got twisted during a tackle.

White has been just outstanding out of the backfield catching 55 passes for the Patriots for 459 yards and six touchdowns. His career high is 60 and he could possibly break that on Sunday night with another big game. The Packers at times play a lot of dime packages on defense and they may opt to try to take White away in the passing game by putting a defensive back on him rather than a linebacker which is a mismatch.

But with Michel’s status up in the air this week, (he’s questionable, but we doubt he’ll play this week), the onus will be even heavier on White to produce. We’d expect to see Brady look his way often on Sunday, especially if the Packers begin blitzing.

With Michel’s status in doubt and even Rob Gronkowski who is battling ankle and back injuries this week and is questionable to play, Edelman’s value as a circled member of trust with Tom Brady will no doubt play a big role this week.

With Pettine’s defense which uses the old Rex Ryan overload schemes and multiple blitz packages, there will be times where Brady will be forced to make a decision and get the ball out very quickly. And in the past several years, he and Edelman have been outstanding at working in sync doing just that. Many times they’ll both recognize a look presnap and with just a look between the two, they’ll know right where they plan to go.

Edelman had a big game in Buffalo and this game in Gillette against the Packers could be a tailor-made game for #11. Look for Brady to call his number early and often.

By: Mark Morse
Green Bay comes into this game with a 14-game home unbeaten streak.  It's third to two Patriots records of 16 and 18 games.  They are…
3 mins ago