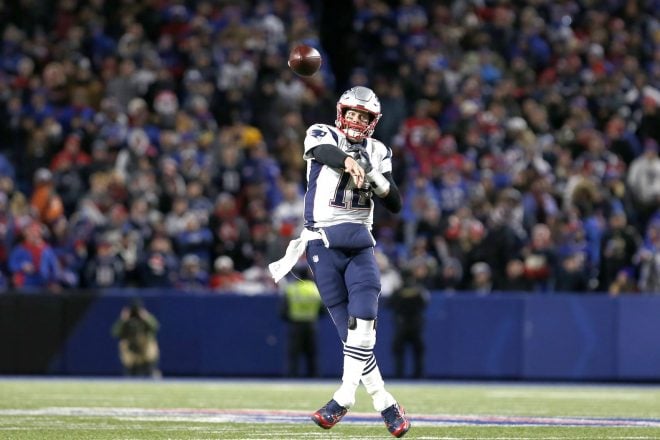 ORCHARD PARK, N.Y. – It’s a good thing the Buffalo Bills’ offense is as bad as it is.

The Patriots were more than able to shake off all the drives that fell short of the end zone and overpower the Bills in the second half.  Two fourth quarter touchdowns cemented a 25-6 Patriot win on Monday night at New Era Stadium.  One of these days, Josh Allen will give the Patriots a good game, but the injured rookie quarterback could only stand on the sidelines and watch.

His replacement, 35-year-old Derek Anderson, presided over a mostly inept offense which generated only two Stephen Hauschka field goals and only 46 rushing yards as a team.  Anderson did manage to throw for 290 yards on 22 of 39 passing with one interception, but his rating was only 69.4.  Anderson was sacked three times, and never really got into a good rhythm.  Buffalo finished only 4 for 14 on third down conversions.

This enabled Tom Brady and his offense to merely not screw up, score when you can, don’t get hurt, and don’t worry about the final score.  Brady also found getting into a rhythm rather difficult, and also didn’t get much help from the running game.  With Sony Michel out with a knee injury, the leading Patriot rusher turned out to be Cordarrelle Patterson with 38 yards on 10 carries.

This was an evening where Buffalo could have been expected to do better.  It was the first home Monday night game for Buffalo in ten years.  At halftime, the Bills honored former running back Thurman Thomas with the retiring of his number 34.  Former Patriot assistant coach Brian Daboll was in charge of the Buffalo offense, and got real creative in the first half with several Wildcat packages and gadget plays.  But those plays were more about looking good than helping to beat the Patriots.  The visitors weren’t about to get snookered like when Miami came to Gillette Stadium in 2008 and unveiled all that option stuff on them.

Instead, it was Brady who shined more than the Bills did.  Brady won his 15th game at Buffalo, the most by any NFL quarterback in a visiting city.  Jim Kelly has the most wins in Buffalo by a quarterback, and Joe Ferguson is second.  Incredibly, Brady’s 15 wins is third, one ahead of Tyrod Taylor and former teammate Drew Bledsoe.  Brady was 29 of 45 passing for 324 yards, but no touchdowns and a rating of 85.8.  Brady managed the game just perfectly, maintained a nice status quo, did nothing to lose the game, and waited for the chance to put the game away.

It was only 9-3 Patriots at the half.  Four of the five first half drives led to field goal attempts for the Patriots, as the Bills’ defense did the “bend but don’t break” thing perfectly.  Stephen Gostkowski hit on field goals from 25, 40 and 38 yards but missed from 50 just before intermission.  Buffalo managed only a second quarter 47-yarder from Hauschka.  Nobody in Patriot Nation seemed really concerned about the lack of offense or not being able to finish drives with touchdowns.

The Bills got the ball back after still another stalled Patriot drive at their own 20.  On the second play, Kyle Van Noy strip sacked Anderson, and Patrick Chung recovered at the Buffalo 29.  But the drive stalled at the six-yard-line, and Gostkowski booted a 25-yard field goal to put the visitors up 12-6.

The Patriots were finally able to put the game away in the fourth quarter.  Julian Edelman hauled in a nice 26-yard pass, and Patterson broke off a 22-yard right end run to put the Patriots at the Buffalo 22.  Chris Hogan nearly found the end zone with a left sideline catch, but James White plowed in from the one on the next play to make it 18-6.  Brady tried to hit a 2-point conversion, but threw the ball to Julian Stanford instead.

Buffalo needed to answer.  Anderson drove the Bills from their own 25 to the Patriot 30.  Facing third down and 15, Anderson tried to hit tight end Charles Clay in the right flat.  On a miraculous switch, Devin McCourty shook off a receiver on the other side of the formation, broke to the ball and picked it off right in front of Clay.  McCourty took off down the left sideline and used four or five blockers to turn it into an 84-yard pick six to put the game away.

The Patriot defense shut down the Bills the rest of the way, vanquishing their last two offensive possessions with heavy pressure on Anderson.  On the final drive, Anderson was sacked twice, the second time knocking him out of the game with a sore wrist.

LeSean McCoy was the leading pass catcher for Buffalo with six receptions for 82 yards, but only had 13 yards on the ground.  Former Jet Chris Ivory led the Bills with 34 yards rushing on six carries and managed to average 5.7 yards per carry.

Patriot fans might be forgiven if they weren’t too interested in this game, let alone the players on the field thanks to the worst offense in the NFL on the other side.  Still weary from Sunday night’s World Series title celebration thanks to the Red Sox, fans have duck boats on their minds more than they have football.  That will now change, once you get Wednesday’s Rolling Rally out of the way.  If the Patriots could pick one game to basically sleepwalk their way to a win without anyone in the fan base caring or paying attention, this game was it.  The Patriots don’t have to apologize for the Bills playing so poorly, but it’s a good thing that this wasn’t the Rams or Chiefs or some team like that.

Bill Belichick began his postgame presser by paying homage to the Red Sox, then proceeded to pay homage to the Bills for a tough game.  Belichick was typically gracious to the other team, and made Buffalo seem like the Rams or Chiefs or some team like that.

Next week the Patriots go back home and entertain the Green Bay Packers, who did play the Rams this week and gave them a great game in front of a ton of Packer fans at the LA Coliseum.  Like the Red Sox at Dodger Stadium later Sunday evening, the Packers enjoyed playing in front of what seemed like a home crowd.  The Packers will have no such luxury next week at Gillette Stadium.

Belichick said that the Red Sox “set the bar high”.  Good.  We’re all for another Rolling Rally in February.