4 years ago at 7:29 am ET
Follow @SteveB7SFG
Posted Under: Patriots Commentary 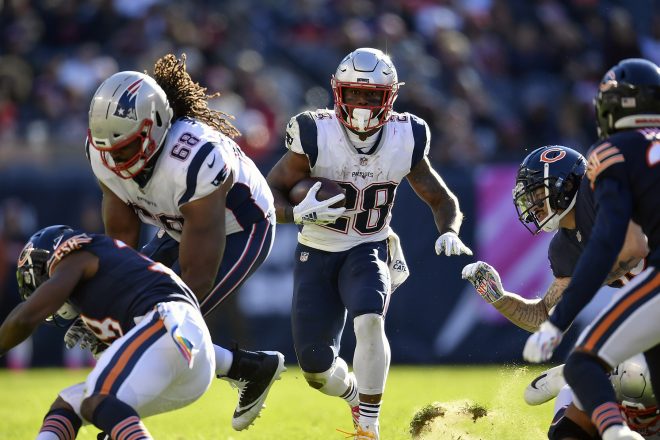 This win, the Patriots first win on the road this season, wasn’t the way they drew it up on the chalkboard but it is a win. And in what is turning out to be a wacky 2018 NFL season, the team will take it. The Patriots made far too many mistakes but turned things around with some big plays on special teams and left Chicago 5-2 after downing the Bears 38-31 on Sunday afternoon. The craziness extended to the final play of the game where the Bears tried…and converted a Hail Mary on the final play of the game but the play was stopped at the one-yard line.

But the biggest news was that rookie running back Sony Michel left the game in the first half in what looked like a serious knee injury. Michel was hit and wrapped up at the line and was twisted in the pile. It was one of those plays that just didn’t look good for the rookie as he was being helped off the field. He’s scheduled for an MRI on Monday.

The Patriots offensive line once again did a tremendous job. The Bears came in with 18 sacks, boasting edge rushers Khalil Mack, Leonard Floyd, and interior pass rusher Akiem Hicks.  They sacked Tom Brady only once and generally were handled easily. However, the Bears helped the Patriots cause by dropping both edge rushers frequently into coverage. Despite that, the offensive line gave Brady plenty of time to throw.

Despite the sloppy play, which initially caused the team to fall behind 17-7, the Patriots found a way, to persevere and come away with the victory. Granted, there won’t be high marks for style points in this one, but they beat a division leader on the road and they did what they had to do.

Speaking of Mack, while he did miss most of last week’s practice, he played and clearly wasn’t 100 percent. But he didn’t line up against LaAdrian Waddle, but Trent Brown who clearly handled him easily. Mack was pancaked by Dwayne Allen on a running play in the second half. Much like Mexico City a year ago, Mack was a non-factor.

The game started off with one of the Patriots most impressive drives of the year. Taking the kickoff and starting at their 25, Brady and Josh McDaniels had the Bears totally discombobulated on defense marching 75 yards on 9 plays capped off with a Brady 9-yard touchdown pass to Julian Edelman. It also featured a lot of Sony Michel.

Taking advantage of the aggressive Bears defense, they ran a run delay play to Michel for 18 yards and then utilized the screen game to perfection. James White had a 14-yard screen, Michel had another for 13 more. It was a great start that soon went awry.

The three turnovers will have the coaching staff seeing red. The one fumble by Michel is a free pass. He was injured, apparently severely and him dropping the ball there isn’t something we or anyone else should point the finger at. But the fumble by Cordarrelle Patterson was a play where he has to take better care of the ball in that situation. And once again a Brady pass into the hands of a receiver is bobbled and deflected right into the hands of a defender. Unbelievable.

Patterson did redeem himself, showing why he is the best kick returner in the NFL returning a kickoff 95 yards for a touchdown, narrowing the gap to 17-14. He later nearly broke another, returning a kick for 38 more.

An area that the team continues to struggle (badly) in is containing mobile quarterbacks. Mitch Trubisky looked like Bobby Douglass out there on Sunday. He rushed six times for 81 and his running kept the Bears in the game when they couldn’t do anything offensively in the first half. Trubisky had an 8-yard touchdown run where he ran around the field for about 65 before getting in untouched.

His 39-yard scramble in the second half was an ugly sequence for the defense where he kept making defenders miss. The defense keeps losing containment and once these mobile QBs get free, the lack of speed at linebacker is concerning. Two words…. Deone Bucannon. Anyone? Bueller?

Besides the fumble by Patterson, the Patriots special teams continued to make several gaffes that cost the team, a pair of 15-yard penalties, unsportsmanlike conduct for the gunner going out of bounds and a facemask really hurt. Ryan Allen’s punt at the end of the game was far from one of his good ones. Julian Edelman muffed a punt inside the 10 but was able to avert disaster by falling on it.

Bill Belichick played the odds at the end of the game and with 29 seconds left and facing a 4th and 6 at the Bears 33. Rather than try a long field goal, he decided to punt and pin them deep. Allen who normally is excellent at putting punts inside the 10, boomed this one nine yards into the end zone.

The sloppy play hit the coaches too. The Pats were flagged for a delay of game on a kickoff of all things and then only had 10 men on the field while the Bears were attempting a 4th down and 2. This cost them a timeout. Could they have used it at the end of the half? Possibly. But the field position may have played much into it.

Rookies J.C. Jackson and Keion Crossen were victimized by several penalties but Jackson was redeemed by an interception, one of two the defense had. The other was a terrific play by Jonathan Jones who high pointed the ball perfectly. In reality, the defense should have had two more interceptions. Trubiski forced a pass into the end zone where he threw it right to Elandon Roberts for what should have been a gift pick. But he couldn’t hold on.

Later Stephon Gilmore jumped a route and was in great position to make another pick, but he too dropped it. On both sequences, one play after Roberts’ drop and two after Gilmore’s the Bears scored touchdowns. That was a huge swing. The Pats make those two plays and this is a blowout win.

The special teams did redeem itself with the Patterson return, later they saw something on film and inserted Dont’a Hightower into the punt team. Hightower burst thru the protection and smothered a punt for a block that Kyle Van Noy scooped up and returned for a touchdown. That 29-yard score put the Pats up for good.

Patriots Three Up, Three Down:

Josh Gordon – This was Gordon’s first game with 100 yards receiving, catching 5 passes for 100 yards including a 55-yarder where he ran out of gas and was tackled at the one. Gordon, who’s been limited with a hamstring admitted that the 96-yard drive had him gassed there.

But the conversion he made where he went up, fought for the ball and came down on his head causing his helmet to fly off but still holding on to the ball was a fantastic play. He’s just scratching the surface of his potential. I would expect to see his role increase as he gets more in tune with the offense.

James White – Already missing Rob Gronkowski on the offense this week, out with a back and ankle injury, the team lost Michel on the first play of the second quarter. White picked up the slack and was his normal productive self in the passing game, 8 catches 57 yards, two touchdowns. He also carried 11 times for 40 yards and helped the Patriots kill nearly all of the clock at the end.

While the Patriots offense goes thru Tom Brady and will until he ultimately hangs it up, White has become the second most important piece of the puzzle. With the injury epidemic at running back, White is now even more important to both the running and passing games.

Tom Brady– Facing a Bears defense that has gotten a lot of props as one of the best in the league, Brady completed 25 of 36 passes for 277 yards with three touchdowns and the one interception, that we mentioned above.

Brady was in control all day despite missing two of his biggest offensive weapons in Gronkowski and Michel. He spread the ball around and had the Patriots in position, twice…to put the game away late.

Sony Michel – The Patriots rookie running back appeared to suffer a serious leg injury and was in excruciating pain as he was twisted to the turf. We won’t know until Monday how serious it is, but his injury was a huge blow to the Patriots offense as he’s been the featured back in the running game.

Michel was off to another dynamic start in the game and was featured on the Patriots opening touchdown drive. We’ll keep our fingers crossed that he dodged a bullet on that one.

DL “Containment”– Yes, this one could easily have been labeled, “non-containment”.  Time and again, Trubiski hurt the Patriots with his running and the team looked, at times, powerless to stop it. He ran both outside and inside up the middle and the Patriots didn’t seem to have an answer.

One would have thought that the Patriots would have (at least by the 2nd quarter), assigned a linebacker to spy on Trubiski in case he decided to…you know scramble all over the field.

Sloppy Patriots STs Play – Granted they balanced the ledger with two huge scoring plays on Patterson’s TD return and the blocked punt TD return. And yes they nearly had a third, but the uncharacteristic mistakes this unit is making is beginning to be a concern. Could the loss of Bolden and Richards off the STs units mean more than we ever believed possible?

A fumble by Patterson, two costly penalties and another near turnover where Julian Edelman muffed a punt inside the Patriots 10-yard line, (Edelman alertly scooped it up), are the types of plays this unit isn’t known for. The coverage units were only okay on Sunday and allowed a 17-yard punt return to the speedy Tarik Cohen.