4 years ago at 6:32 am ET
Follow @SteveB7SFG
Posted Under: Patriots Commentary 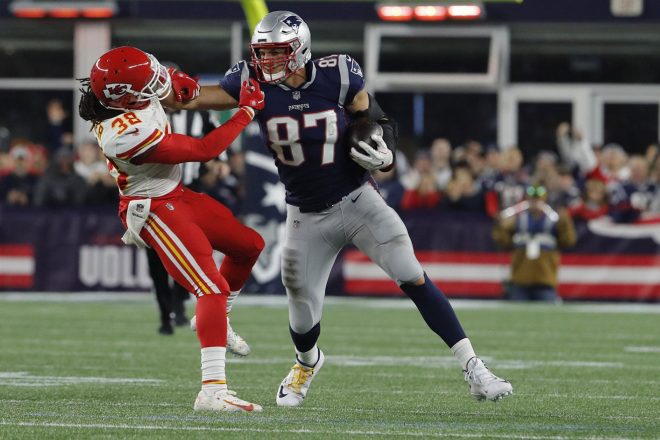 Who can go to sleep after that one?

This one lived up to the billing. The Patriots-Chiefs Sunday Night Football game turned into an instant classic, at the end of the night resembling an old-fashioned AFL shootout as the teams were scoring back and forth. Punters? Who needs ‘em? This was a night for offense and big plays and the Patriots made just a couple more than the Chiefs did in the end and walked off with 43-40 win on a Stephen Gostkowski field goal as time ran out.

Tom Brady hit Rob Gronkowski with a huge 39-pass play down the right sideline to set up the game-winner as he and KC quarterback Patrick Mahomes put on a show for fans at the stadium and watching on television. If you were looking for offense and points scored, this was the place for you on Sunday night and you would not have been disappointed.

We wrote in our pregame keys that this would come down to whoever got the ball last. We said Brady would lead them to a 38-35 win on a late drive. We didn’t give the offenses enough credit.

The Patriots defense played a tremendous first half, holding the Chiefs explosive offense to just nine points and forced Mahomes into two costly interceptions, one which put the New England offense on the doorstep for an easy TD, and the other at the end of the half in the Pats end zone which cost KC three points at the end of the half.

They were aggressive and disruptive and did enough to slow down a Chiefs offense which had outscored their opponents by a whopping 59-9 in the first quarter of their first five games. But Mahomes in the second half showed the stuff that has been the hallmark of the Chiefs’ offense this year.

They began hitting big plays and turned a comfortable 24-9 lead at the break into a track meet. Mahomes made one play, running to his left and then in a twisting motion, firing a frozen laser downfield about 30 yards to an open Tyreek Hill that was just sick. And the 67-yard strike to RB Kareem Hunt had the déjà vu feeling of a year ago when the Chiefs torched the Pats on opening night.

He brought the Chiefs back to take the lead in the fourth quarter 33-30 on a pass to Tyreek Hill which quieted what had been a raucous New England crowd. That came on the heels of another big play, a 97-yard kickoff return by Tremon Smith that set the Chiefs up on the doorstep.

Brady behind the running game of Sony Michel who rushed for another 106 yards, then put up the next 10 points giving the Patriots a 40-33 lead with a little bit more than three minutes left on the clock. Mahomes and the Chiefs would need only 12 seconds of that, thank you very much. Hill flew down the field like he was shot out of a cannon, dusting Duron Harmon, who is one of the fastest Patriots like a turnstile at the airport, going 75-yards in one play and the score was tied at 40. If there was one mistake in that, it was that KC left Tom Brady too much time. With 3:03 left and all three timeouts remaining, the Patriots did what great teams are supposed to do in big moments. They answered the bell. Michel picked up a key 3rd and 1 at the Patriots 34 and they were in business.

Brady hit James White for 16 and then Gronkowski for 39 to set them up for milking the clock and getting the ball on the left hashmark for Stephen Gostkowski who nailed the 28-yarder as time ran out to give the Patriots the win and improve them to 4-2.

Brady finished 24-35 for 340 yards with a TD. He also ran one in from 4-yards for another. Mahomes finished 23-36 for 352 yards with 4 TDs and 2 INTs. While they flustered him a bit early in the game, he never panicked and was cool down the stretch and once he got them going, the Chiefs offense looked unstoppable.

The Patriots two-head RB tandem of Michel and White was again excellent, Michel carried 24 times for 106 yards, while White had 8 carries for 39 yards and added 5 catches for 53 more. Rob Gronkowski was quiet until the fourth quarter, catching two huge passes, a 42-yarder, where he displayed a stiff arm that belongs in the WWE, to set up the go-ahead score and his final catch that set the team up for the win. He finished with 3 catches for 97 yards. New England finished with 500 yards of offense.

Hunt showed he loves playing in Foxboro, he had another mammoth game for KC carrying 8 times for 80 yards and caught 5 passes for 105 more. Hill caught 7 for 142 yards and three touchdowns. Travis Kelce had 5 grabs for 61 yards but the Patriots did a good job of neutralizing him early on.

The Patriots are on to Chicago to take on the Bears who lost in overtime to the Dolphins in Miami. They play 4 of the next five on the road.

Patriots Three Up, Three Down:

Tom Brady – This wasn’t his best game, he made mistakes, he held the ball too long on a third-down play in the third quarter that ended up being a strip sack, but he more than made up for it. But on a day where the offense rolled to 500 yards, Brady threw for 340 and added a heads up running touchdown. And the final drive of the game was vintage Brady, Josh Gordon characterized his demeanor in the huddle then as “very poised.”

Sony Michel – Remember a few weeks ago some bobo began calling him a bust? And he got many fans jumping on board with that absurdity. How do you like them apples? Michel had another strong game and his ability to pick up the short-yardage conversions has been excellent. His last three games? He’s racked up 112, 98, and 106 yards and the Patriots have scored 119 points in those three games and won all three.

Dont’a Hightower– On the Chiefs first possessions, they were targeting Hightower using the RPO (run/pass option). But that changed. He began to play a more aggressive game and was chipping Kelce before he was going out in the pattern, and got a key interception. Faking a blitz, he dropped into the throwing lane where he picked off Mahomes. He later brought pressure on Mahomes which forced a throw that was picked off by Harmon in the end zone. The aggressiveness shown by Hightower and the defense held KC to just 4-10 on third down.

Honorable mention – Patriots offensive line. When you roll up 500 yards of offense, including 173 yards on the ground and control the clock for 36 minutes, you’ve done your job.

Jason McCourty – The Patriots corner who has played so well this year, committed the cardinal sin of peeking back in the backfield early in the third quarter. It was then that Hunt blew by him and Mahomes hit him in stride for a 67-yard touchdown strike.

Devin McCourty – Yes, it wasn’t the greatest of nights for the twins from Rutgers. McCourty had the unenviable task of trying to stick with Hill. Nobody has the kind of speed that Hill has. He makes everyone chasing him look slow and he easily beat McCourty twice for touchdowns in the second half.

Patriots coverage units – Remember when the Pats special teams were among the best in the business at covering kicks and punts? The unit got gashed and hard by the Chiefs tonight. Smith returned one kickoff for 33 yards out to the 37 to give KC excellent field position which led to a field goal. Next, he returned on 97 yards to put the Chiefs inside the five-yard line for an easy go-ahead score. That is unacceptable.

By: Robert Alvarez
Linebacker Jahlani Tavai agrees to a two-year contract extension with the Patriots.
13 hours ago

By: Robert Alvarez
Devin McCourty will appear in his 200th career NFL game on Thursday night against the Buffalo Bills, Robert Kraft honors his milestone.
15 hours ago

By: Robert Alvarez
Sideline mic'd up sights and sounds during the New England Patriots' Week 12, thanksgiving matchup with the Minnesota Vikings.
16 hours ago