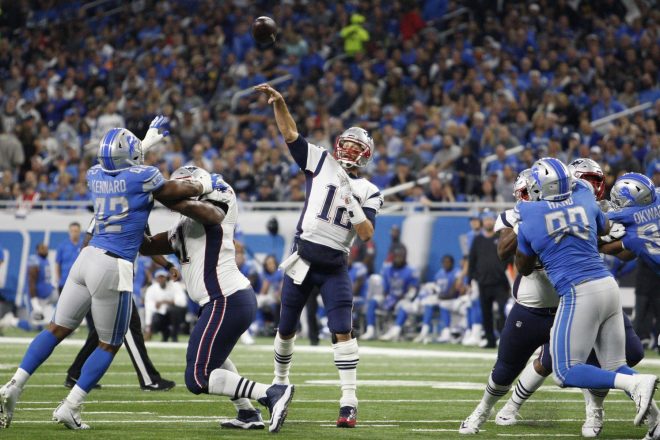 Some interesting numbers after five weeks for the Patriots offense, with a different take on some stats after comparing some totals at this point last season.

Bad News: The Patriots have just two receiving plays of 30+ yards so far this season compared to eight at this point last season.
Good News: None…that isn’t good.  However, both of those plays occurred in each of the last two games (Patterson’s 55-yd TD against the Dolphins, and Josh Gordon’s terrific 34-yd touchdown Thursday night against Indy) so hopefully, it’s a sign of things to come.

Good News: For the most part, the Patriots offense has done a good job of staying out of long-yardage situations on offense, especially on 3rd down.   At this point last season they had already faced 3rd-and-10 seven times compared to just four this season, along with having been up against 3rd-and-over-10 yards twelve times compared to just eight this season.
Bad News: They’re 0-for-4 converting on those 3rd-and-10 attempts while converting just 2-of-8 on 3rd-and-over-10.  Again, obviously, not great news but that should also hopefully improve moving forward.

Good News: Dwayne Allen actually has a reception through five games, which is certainly better than the 0-for-6 total he carried through the same number of games last season.
Bad News: That one catch went for a 4-yard loss.

– Sony Michel is ahead of last year’s leader at this point, Mike Gillislee, with Michel carrying the football 67 times for 294-yards along with 2 touchdowns while averaging 4.4 yards-per-carry.  That’s better than Gillislee’s 69 rushes for 246 yards, which was an average of 3.6 yards. However, Gillislee also led all rushers at the time with four touchdowns.

– At this point last season, Chris Hogan had 23 receptions for 288 yards and a team-leading 5 touchdowns.  So far this year Hogan has just 11 receptions for 143-yards and 2 touchdowns, just one reception ahead of newcomer Corradelle Patterson (10 catches, 10yds, and 2TDs).  With Gordon and Edelman potentially taking the focus off of him, Hogan’s production should hopefully improve.

– One final related stat for Hogan, he had five red zone receptions at this point last season, with four touchdowns after being targeted nine times.  He’s been targeted just once thus far in 2018, which was a 7-yard touchdown.

– It’s hard to believe that James White didn’t have a touchdown reception at this point last season, but so far in 2018 he already has a team-best 4 touchdowns.  He also leads the team in receptions so far with 32 receptions for 270-yards.  He also led the team at this point last year with 29-catches for 230 yards, ahead of Hogan (23) and Amendola (23), followed by Gronkowski (20) and Cooks (18), who rounded out the top 5 in that category.

– Tom Brady has 8 red zone touchdowns so far, which is actually one better than the 7 he had at this point last season.  White (4), Phillip Dorsett (2), Hogan (1) and Patterson (1) are the ones who get the credit for that total.  Last season it was Hogan (4), Danny Amendola (1), Rex Burkhead (1) and Rob Gronkowski (1) who each accounted for that total.

For a more detailed look at much more sortable stats, view our Stats Page: